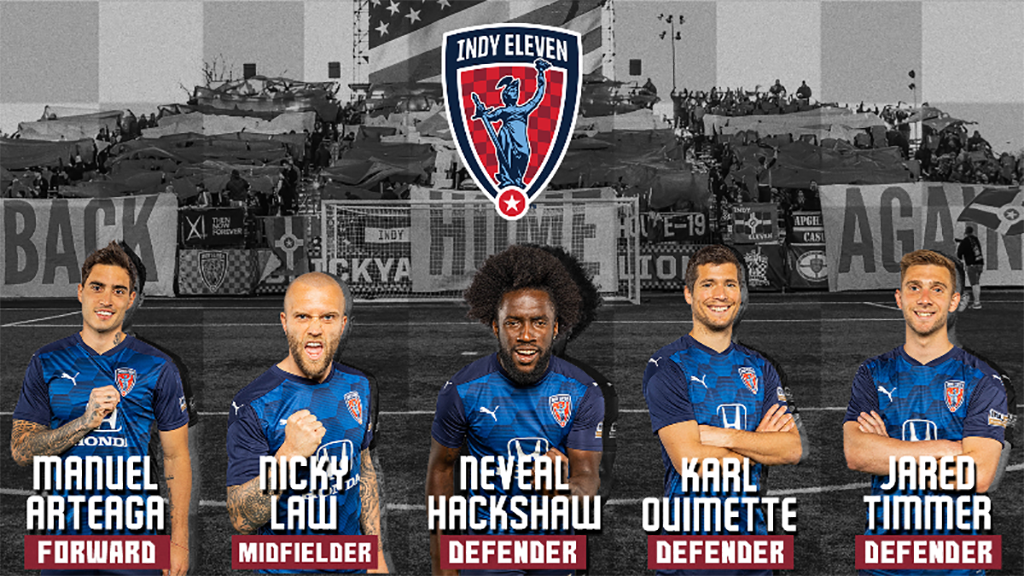 INDIANAPOLIS – Indy Eleven announced on Wednesday its first roster moves of the offseason, with the club exercising contract options on defender Jared Timmer and midfielder Nicky Law. The club also announced the return of defenders Neveal Hackshaw and Karl Ouimette and forward Manuel Arteaga, all of whom were previously under contract for the 2022 USL Championship season.

“Having this outstanding group of players returning is a more than solid start to the re-building of our roster for 2022, and I’m looking forward to getting to work with them,” said Indy Head Coach Mark Lowry. “I know the Eleven supporters will be happy as well, as all of them have proven to be players that have embraced – and been embraced by – the fanbase and the community.”

Arteaga had a standout season in the Indy attack during his first season with the club as he became the fifth different player in club history to finish a season with double-digit goals. The Venezuelan notched 10 tallies, more than doubling the output of the squad’s next highest scorer. Arteaga also became just the third field player to play in every regular season contest during a full-length campaign (omitting the COVID-shortened 2020 season) as the 27-year-old’s appearances in all 32 games last season saw him join Don Smart (2014) and Tyler Gibson (2019) on that short list in club history.

While national team call-ups and injury limited Hackshaw’s time on the pitch in 2021, the Trinidad & Tobago international was no less influential for the squad than during his USL Championship All-League seasons during his first two years with Indiana’s Team. Since joining Indy Eleven, Hackshaw has started 64 of his 67 appearances in official competitions (ranking seventh and eighth in club history, respectively) while compiling five goals and three assists from his usual left back position.

After spending 15 years in British footballing circles, Law made his mark on Indiana’s Team after coming stateside in 2021. The consistent midfielder led the Boys in Blue with 28 starts and was second behind Arteaga with 30 appearances, adding three goals and an assist along the way at various midfield and attacking roles. The impressive career totals for the 33-year-old native of Plymouth, England, now stand at 112 assists and 79 goals in 592 matches across eight domestic leagues and 11 official cup and playoff competitions.

The 2021 season marked some milestones for the veteran defender Ouimette, who assumed vice-captain duties in his fourth season with the squad and became the third player in club history to appear in 100 games. Now Ouimette will be in line to become just the second player ever to play in five seasons for the club alongside Brad Ring – and he would do so while being reunited with Lowry, whom he played for briefly while on loan to Jacksonville Armada FC during the 2016 season.

The versatile Timmer enjoyed a successful return to Indianapolis in 2021, the second-year product out of Butler University bringing athleticism and ability to the defensive midfield position and spots along the backline across his 28 appearances. Timmer finished tied for the team-lead alongside Hackshaw with 36 interceptions and led the team with 83 clearances while winning 124 of 195 duels for a success rate of 63.6 percent.

As Lowry continues to settle into his role with club, Indy expects to make additional announcements surrounding its 2022 roster and coaching staff in the coming days and weeks.