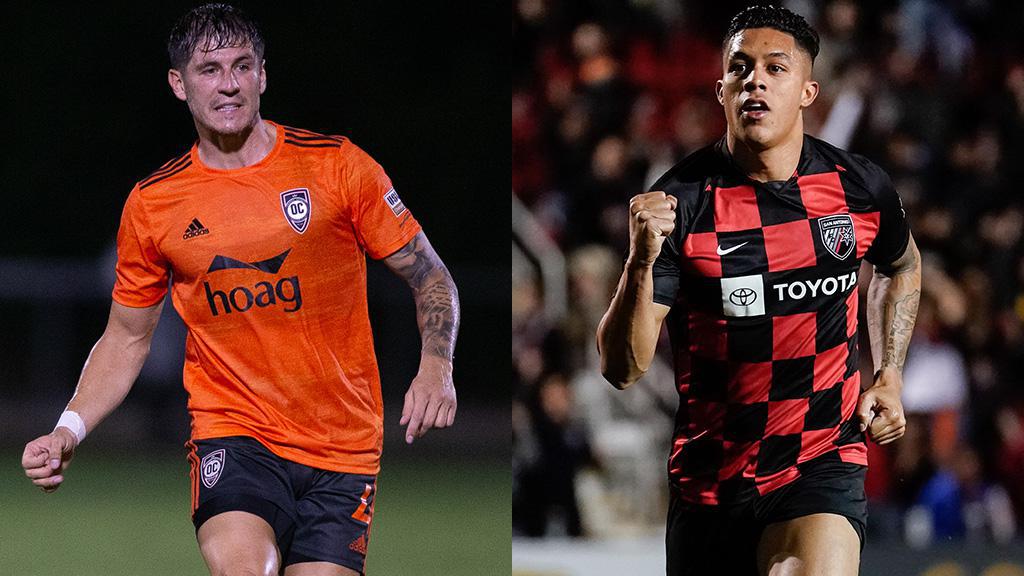 Orange County SC's Rob Kiernan will try to help contain a San Antonio FC attack including Santiago Patino as the sides meet in the Western Conference Final of the 2021 USL Championship Playoffs, presented by TwinSpires

IRVINE, Calif. – Three years ago, Richard Chaplow was Orange County SC’s captain as he led the club into what was at that point the biggest game in its history.

On Saturday night, Chaplow will be hoping to lead his team to another piece of history as its Head Coach when Orange County plays host to San Antonio FC at Championship Soccer Stadium in the Western Conference Final of the 2021 USL Championship Playoffs, presented by TwinSpires. Kickoff is scheduled for 7:30 p.m. ET (ESPN+ | SiriusXM FC).

Orange County will be making its second appearance in the Western Conference Final after reaching the same stage in 2018 when Chaplow was still a player. The side fell 2-1 to Phoenix Rising FC that night at Championship Soccer Stadium as a late goal by Koji Hashimoto wasn’t enough to spark a comeback against the visitors led by legendary forward Didier Drogba. This year’s side has been built in a different form from the high-flying side that recorded 70 goals three years ago, with the defensive record OCSC has built since Chaplow’s midseason appointment as interim Head Coach – a move that was made permanent last week – providing the foundation for its success with the experience of center backs Michael Orozco and Rob Kiernan – who will be available after a one-game suspension last week – leading the way. Orange County has conceded only once in its last seven games, including shutouts in each of its first two postseason games, as goalkeeper Patrick Rakovsky has recorded 23 saves and a 95.8 save percentage.

Rakovsky played a key role in sending Orange County to the Western Conference Final as he denied Oakland Roots SC’s Akeem Ward in the sixth round of a penalty shootout before Ronaldo Damus converted to send the hosts through. Damus leads OCSC with 15 goals this season to lead the attack, and has seen support from Brian Iloski (3 goals, 4 assists) and Mikko Kuningas (3 goals, 4 assists) with that duo also ranking 1-2 on the team with Iloski recording 50 key passes and Kuningas 29 in the regular season.

The hosts’ defensive record will likely be tested by a San Antonio side making its first trip to the Western Conference Final in its history, with the visitors having recorded eight goals across their past three outings after a 3-1 victory against Rio Grande Valley FC last Saturday night at Toyota Field. Santiago Patino scored twice for SAFC as his resurgence following an early season injury continued, while leading scorer Nathan Fogaca also found the net to give the side victory in the first postseason edition of the South Texas Derby. Patino has now scored three goals in two postseason games to move to eight goals in 13 appearances overall in the campaign after suffering a stress fracture in July, while Fogaca has two in two postseason games to move to 13 goals this season.

San Antonio’s success has come in part through its direct approach, which has seen the side rank last in the league with an average of 44.3 percent possession per game and 72.5 percent passing accuracy rate but rank second in the league in chances created with 375. Leading the team in that area have been winger Marcus Epps, who ranks tied for first with dead ball specialist Cam Lindley on 56 chances created this season, while young Academy graduate Jose Gallegos has notched 44 chances created while leading the league with 105 completed dribbles. As San Antonio aims to drive forward quickly, how Orange County matches up in the first meeting between the sides since a 0-0 draw at Championship Soccer Stadium on July 20, 2019 should be fascinating to watch.