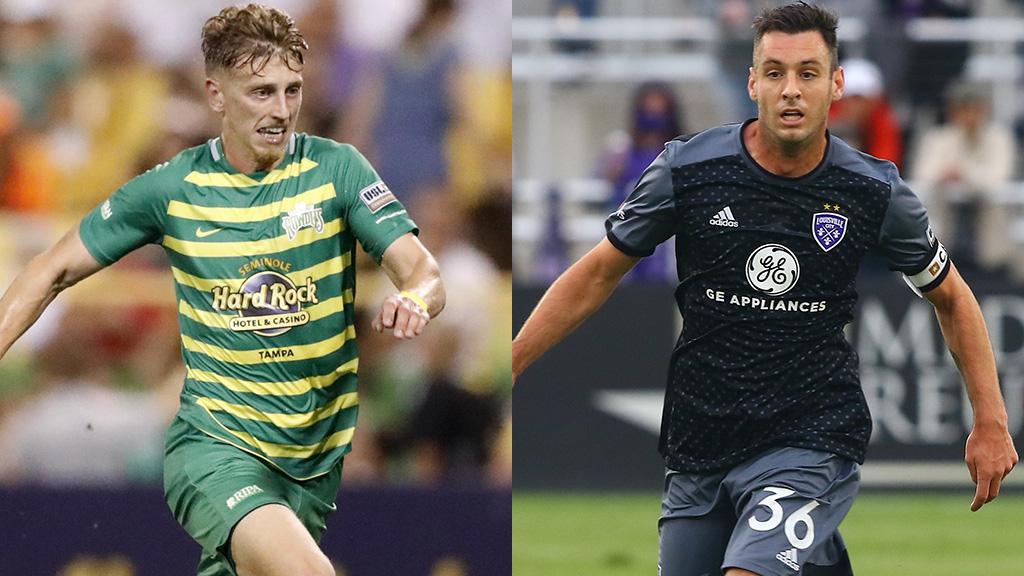 The Tampa Bay Rowdies' Laurence Wyke and Louisville City FC's Paolo DelPiccolo could have a notable role to play as their sides meet on Saturday in the Eastern Conference Final of the 2021 USL Championship Playoffs, presented by TwinSpires.

ST. PETERSBURG, Fla. – One year ago, the Tampa Bay Rowdies earned their first silverware in the USL Championship as it defeated Louisville City FC to claim the Eastern Conference title at Lynn Family Stadium.

This Saturday night, the same two sides will meet again with the Rowdies looking to defend their throne and LouCity aiming to earn a fourth trip to the USL Championship Final as the sides meet at Al Lang Stadium in the Eastern Conference Final of the 2021 USL Championship Playoffs, presented by TwinSpires. Kickoff is scheduled for 7:30 p.m. ET (ESPN+ | SiriusXM FC).

The contest is the second consecutive postseason rematch for the Rowdies, who advanced last Saturday night with a 1-0 win against Birmingham Legion FC – which they had also defeated in the 2020 postseason – at Al Lang Stadium. Yann Ekra’s goal in the 57th minute proved the difference as the Rowdies recorded their 16th shutout of the season across the regular season and playoffs. Tampa Bay has now conceded only 25 goals in 34 games in 2021, fewest in the league, as its back line of goalkeeper Evan Louro and center backs Jordan Scarlett, Forrest Lasso and Aaron Guillen have continued their impressive performances over the course of the campaign.

Tampa Bay’s attack has also been among the best in the league, too, with forward Sebastian Guenzatti having recorded 22 goals at a rate of one every 122.1 minutes to lead the side. The club’s captain has recorded 51 goals across the past three seasons in the regular season and playoffs, and this year has been ably backed by a squad has seen Steevan Dos Santos score 11 times and Leo Fernandes add eight goals playing multiple positions from left wingback to attacking midfield.

Louisville’s attack also boasts a similar prolificacy as it sits one goal ahead of the Rowdies with 63 goals across the regular season and playoffs, good for second in the league overall. The two-time Championship title-winners earned their seventh consecutive trip to the Eastern Conference Final last Saturday as a late penalty kick by Cameron Lancaster earned a 1-0 victory against the Charlotte Independence at Lynn Family Stadium, keeping alive one of the most remarkable postseason streaks in North American soccer. Lancaster’s goal was his 21st of the season, while midfielder Paolo DelPiccolo has had a career year with nine goals and teammates Brian Ownby (11 assists) and Jonathan Gomez (8 assists) have provided plenty of opportunity to strike.

LouCity’s defense has also shown improvement as the postseason neared with the side having recorded three consecutive shutouts to first close the season and earn first place in the Central Division with a victory against Birmingham Legion FC on October 30 before back-to-back clean sheets in the playoffs against Miami FC and Charlotte over the past two weekends. Featuring an experienced back line led by center back Sean Totsch – who has played every minute of the season so far – Louisville will be looking to close down a Rowdies attack that struck twice in the first half when the sides most recently met in last year’s Eastern Conference Final on the way to a 2-1 victory.