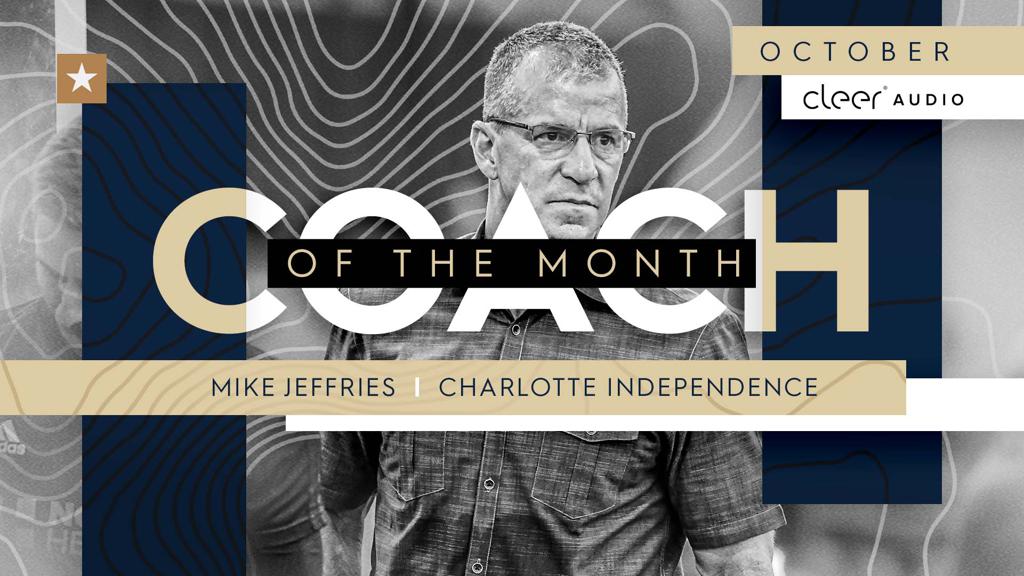 TAMPA, Fla. – The Charlotte Independence’s Mike Jeffries has been voted the USL Championship’s Coach of the Month for October presented by Cleer Audio. Jeffries earned the honor after guiding his side to an undefeated final month of the regular season with six wins out of seven games that saw the Independence claim second place in the Championship’s Atlantic Division.

In his second stint as the Independence’s Head Coach, Jeffries this year led the side to a second consecutive postseason appearance with the strong returning core led by forward Dane Kelly, midfielder Enzo Martinez, defender Hugh Roberts and goalkeeper Brandon Miller was supplemented by some notable names that joined the club prior to and during the current campaign. At the forefront is defender and former Premier League title-winner Christian Fuchs, who has stepped into the club’s back three impressively, and he has been joined by attacking midfielders Sylvain Marveaux and Gabriel Obertan, both of whom brought extensive top-flight experience to the side from England and France.

“Adding Christian, Sylvain, and Gabriel has not only added to the quality of the group, but they provide excellent experience and mentorship for the group,” said Jeffries. “With them, the day-to-day expectation bar is higher for everyone, which has improved us as group. Training is more competitive, in terms of both quality, mentality, and habits, which translates into our stronger game performances.

“Their leadership also shows in our on-field organization in training and games; in addition, their ability to put an arm around or speak with younger players from the perspective of a player who has played at high levels is invaluable.”

The Independence claimed their first postseason victory in club history last weekend, defeating Memphis 901 FC at American Legion Memorial Stadium, and this Saturday the side will face Louisville City FC in the Eastern Conference Semifinals of the 2021 USL Championship Playoffs, presented by TwinSpires. Jeffries has been delighted with the manner in which the team has gone about managing its run into the postseason, and what that offers in terms of claiming the Independence’s first silverware.

“The players have done a fantastic job of maintaining the focus on just the next game and not worrying about where we were in the standings on a given day,” said Jeffries. “The staff has done outstanding work keeping the group healthy, motivated, and prepared through the stretch run of the season. As some of the midseason player additions have worked their way into match fitness, we have been able to establish our way of playing and build the confidence and chemistry which comes with playing together.  Most importantly, we have benefited from every player in the group pushing day-in and day-out to play and contribute in any way they can.”

Jeffries received 74 percent of the ballot to claim October’s award. Memphis 901 FC’s Ben Pirmann – who led his side to six wins in its final eight games to finish in third place in the Central Division and earn a first postseason berth – finished second on 17 percent.