Built from the Grassroots Up, Detroit City FC Eager for New Stage in Championship

Every club’s story in American soccer has a level of uniqueness.

At Detroit City FC, however, its growth as a force in lower division soccer has come brick by brick, community member by community member, with a leadership that has never forgotten what the central mission of the club has been aimed toward during almost a decade in the United States’ soccer landscape.

“I think we are a grassroots success story,” said DCFC CEO Sean Mann, one of the club’s original five founders. “Started out from very humble beginnings, rooted in community, and have always kept a focus on the community that the club represents, but also the community that has grown up around the organization. We’ve built this incrementally over the past decade to get to the point where we are today.”

On Tuesday evening, Detroit City FC became the newest member of the USL Championship, bringing the club’s remarkable story to a new league, a heightened level of competition and a bigger spotlight. It’s a step those like Mann within the club are excited for as the club’s upward trajectory continues.

“We’ve always pushed ourselves as an organization on and off the field,” said Mann. “I think we were disappointed this year that the Open Cup didn’t happen, and I think naturally soccer fans want to see how you stack up against the other leagues and other competition, and we’ve always used the USL Championship as the benchmark for our organization. 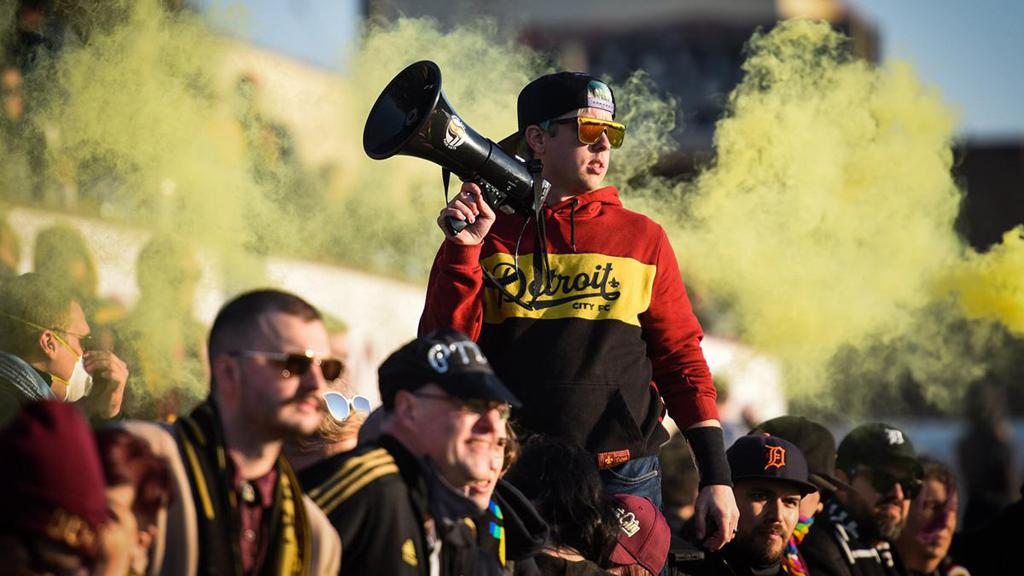 Detroit City FC's supporter culture has become one of the strongest in the United States, with Keyworth Stadium becoming an iconic venue in lower division soccer in the country. | Photo courtesy Jon DeBoer / Detroit City FC

The roots of Detroit City FC can be found in Belle Isle in downtown Detroit, whose field – previously used as the playing surface at the Pontiac Silverdome in the 1994 FIFA World Cup – served as the original home for the Detroit City Futbol League in 2010. The co-ed, recreational league that brought together teams and players from historic neighborhoods of Detroit quickly achieved its aim as a community catalyst, bringing more than 1,000 players per week to compete and celebrate the city.

From that idea came an organization that has united Detroit around soccer. Founded by five Detroit natives including Mann, who also founded the DCFL, Detroit City FC kicked off its first season in the National Premier Soccer League in 2012. The club’s motto, Passion for Our City, Passion for the Game, has resonated within the city and the broader community of Detroit natives now spread across the country and the world as a unifier for one of the unique clubs in North America.

That concept of a club being greater than simply what happens on the field is now commonplace in the soccer landscape in the United States, with notable examples across the USL Championship and League One working diligently to better their communities beyond the field of play. For Le Rouge, that buy-in to the community has seen the community embrace them back, not only in Detroit but on a national level.

When the club had outgrown its original home at Cass Technical High School, leadership set its sights on Keyworth Stadium – a historic venue in the city that had fallen into disrepair and decline – but lacked the financial means to achieve their vision. That’s where the supporter base came in.

“Most of the stadium was pretty derelict, there was a discussion of demolishing it,” said Mann. “We as everyday guys who started the club didn’t have the personal cash to rehab the stadium, but what our greatest asset has always been is the support of the club. We had 500 individuals put in $750,000, which was enough to address the stadium’s most pressing needs, get the stadium up and running and functioning again.”

The money – effectively serving as a bond that was repaid ahead of schedule by the club – helped restore the venue, which is now one of the best-known in lower division soccer in the United States. The atmosphere generated by The Northern Guard for its players makes it one of the best gameday experiences in North America, one that Mann is hopeful visiting fans from the rest of the Championship will travel and get to see in person. 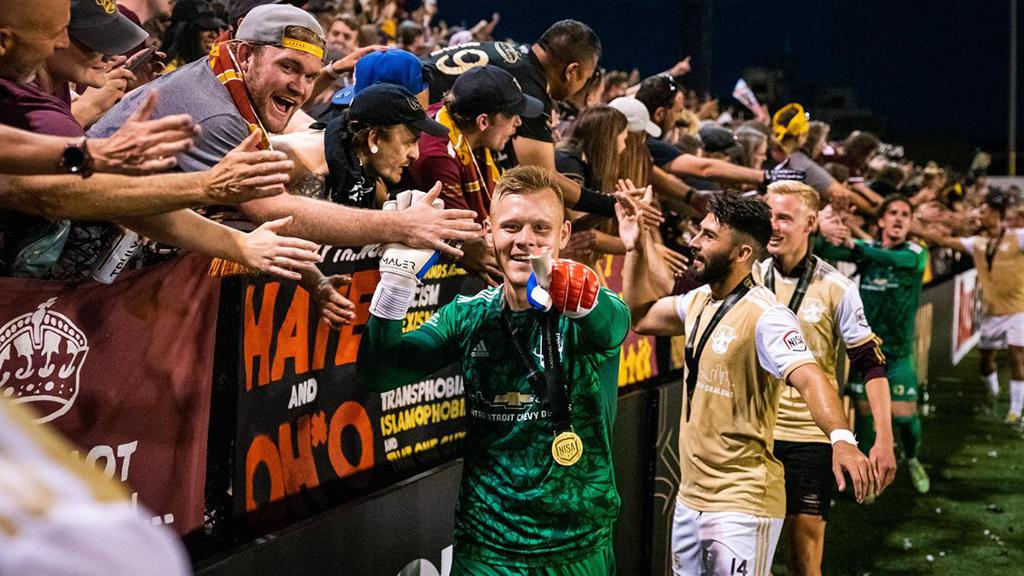 Accessibility both to the game and to the club's players and staff has been a central pillar for Detroit City FC as it navigated an upward path from the amateur to the professional ranks. | Photo courtesy Jon DeBoer / Detroit City FC

Having seen the appetite to become part of the club through the Keyworth investment drive, though, the next step opened the door to a different level of fan involvement in American sports.

“We knew we had supporters who wanted to contribute to the team in ways beyond just buying tickets and all the different ways supporters want to support a team,” said Mann. “When COVID happened, we were trying to put ourselves on the right footing, we leaned on those supporters and we actually sold equity in the club. It was a huge success, we actually hit the federal limit for what we could raise in basically three days, and that’s how we started this current chapter.”

Now, 10 percent of the club is owned by around 3,000 fan investors who each hold their stake in the club. Many of those can be found at Keyworth on gameday, or at the clubhouse located inside Detroit City Fieldhouse where members of staff, the technical staff and fans mingle in a venue Mann likens to a modern-day Elks Lodge, giving the inclusive atmosphere the club has sought to foster.

“It’s accessibility, whether that’s the club leadership, or the players, or the front office, I think there is very little separation between the supporters around this club and the community around this club and the people who are running it day-to-day,” said Mann. “You can come up there anytime and you know you’re going to bump into other supporters or people in the soccer community, academy players, and also myself and my partners who work full-time for the club. You’ll find us there, you’ll find coaching staff, there’s not a wall between us.” 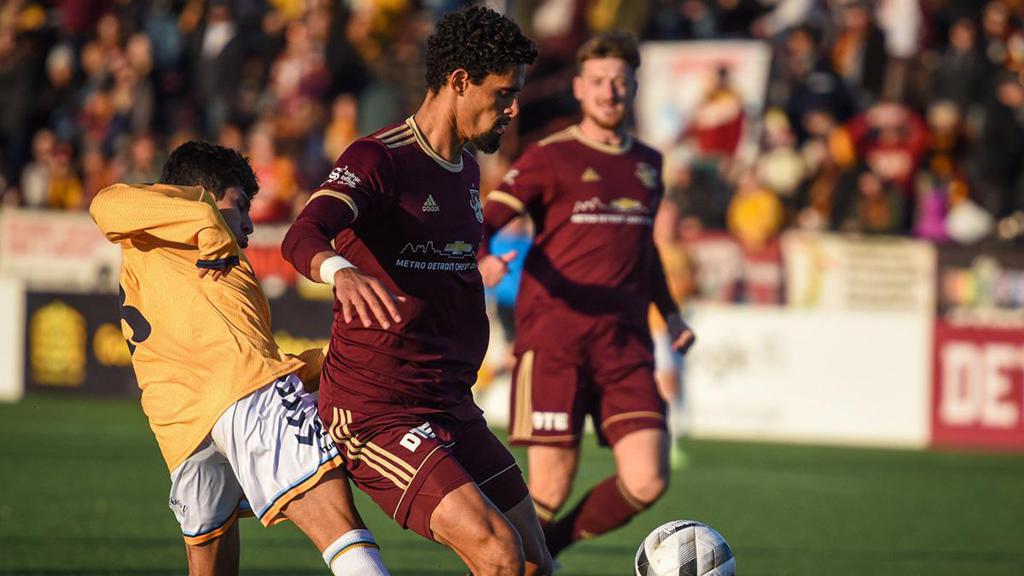 Detroit City FC's arrival in the USL Championship for the 2022 season marks a landmark new era for the club, and a new challenge its players and staff are excited to take on. | Photo courtesy Jon DeBoer / Detroit City FC

Detroit City has also been a place to grow for current players and coaches in the Championship, too. From the likes of Memphis 901 FC’s Ben Pirmann, who served as DCFC’s Head Coach for six seasons before heading to the Bluff City or current Tampa Bay Rowdies goalkeeper Evan Louro, who played for the side in the 2016 season, DCFC alumni can be found in both the Championship and League One. That familiarity should help the club, as will the league’s broader partnerships – especially on the broadcasting side – that will offer the team a heightened level of visibility.

“We’re very familiar in a lot of ways with the level,” said Mann. “There’s certainly things for us to learn, but with one of our club priorities being accessibility, making every match easily accessible on ESPN or the idea we can include away matches on our broadcast TV network, it just makes DCFC that much more easy to access for our fans and to a wider audience. For the guys on the field, I know they’re champing at the bit to prove themselves against a higher level of competition.”

If there’s one thing that won’t change as Detroit City FC enters its new era, though, it’s the identity that has made the club what it is today.

“There’s a lot of great clubs in the USL Championship, and we’re excited to join,” said Mann. “I think one thing we take a lot of pride in that we don’t see changing is our matchday atmosphere. Keyworth is a very special place because of our fans, and I think we have a very unique, very memorable matchday experience for teams and for fans that make the trip to Detroit. We’re looking forward to having fans from other clubs making their trek to Detroit.

“I also think our supporters will embrace the opportunity to travel – even at our current level, there’s always a healthy number of DCFC fans wherever we go and play across the country, and we’re looking forward to DCFC, Detroit supporters pop up all across the map. I think we’ll bring a lot of liveliness across the league and create some memorable experiences for teams and fans alike.”