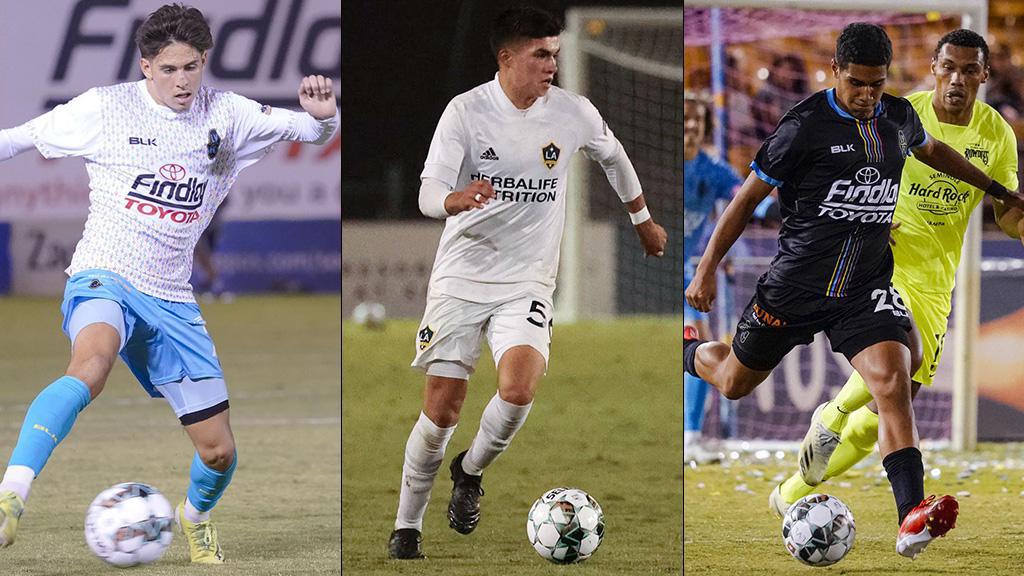 Las Vegas Lights FC's Christian Torres (left) and Tony Leone (right) and the LA Galaxy II's Jonathan Perez (center) have been named in the Mexico U-20 squad that will compete in the 2021 Revelations Cup this week.

Las Vegas Lights FC defender Tony Leone and forward Christian Torres and LA Galaxy II forward Jonathan Perez have each been selected in the Mexico U-20 Men’s National Team squad that will take part in the 2021 Revelations Cup starting this week.

The players join a contingent who also saw action in the USL Championship this season that were named to the United States U-20 squad for the tournament, including El Paso Locomotive FC’s Diego Luna and Orange County SC’s Kobi Henry.

Leone recorded 23 appearances for Lights FC this season, logging more than 2,000 minutes of action in the center of defense and recorded 86 clearances, 25 blocks and 31 interceptions over his first full professional season. Signed as a Homegrown Player by Los Angeles FC in 2020, Leone recorded one goal and three assists over the course of the campaign.

Torres made 25 appearances for Lights FC, combining 16 starts with nine appearances as a substitute as he recorded 1,244 minutes of action. Also a Los Angeles FC Homegrown signing, the wide attacker recorded three goals, one assist and 16 key passes and posted a 73.3 percent passing accuracy rate and a 73.3. percent shooting accuracy rate with 11 shots on target on the campaign.

Perez made 17 appearances for the Galaxy II this season, his second in the Championship on loan from the Galaxy. The 18-year-old recorded one goal, three assists and 16 key passes in 1,132 minutes of action for Los Dos this season while recording 25 successful dribbles and a passing accuracy rate of 79.9 percent.

Mexico will open the tournament on Wednesday night at 8:30 p.m. ET against Colombia and follow that with a contest against Brazil at 7 p.m. ET on Saturday night. The side will round out the tournament against the United States on Tuesday afternoon at 6 p.m. ET, with all games scheduled to be aired live on Univision Deportes.