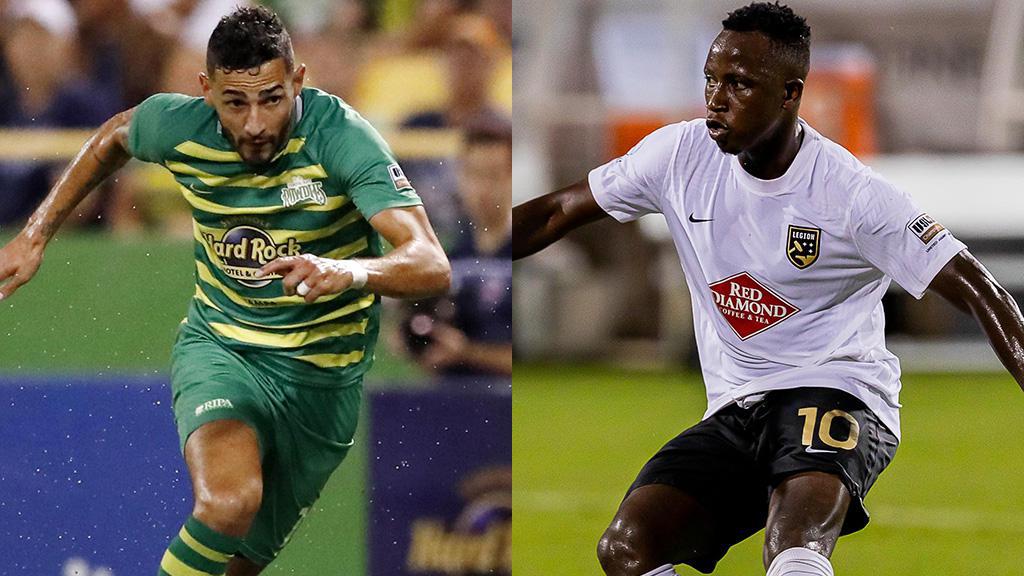 The Tampa Bay Rowdies' Leo Fernandes and Birmingham Legion FC's Prosper Kasim each found the net when the Rowdies defeated Birmingham 4-2 in last year's playoffs. The sides meet again this postseason on Saturday.

ST. PETERSBURG, Fla. – The Tampa Bay Rowdies equaled their best attacking performance of the season to kick off the postseason last weekend, opening their bid for a second consecutive Eastern Conference title.

This Saturday night, however, they’ll have a more familiar foe to face as Birmingham Legion FC visits Al Lang Stadium for the Eastern Conference Semifinals of the 2021 USL Championship Playoffs, presented by TwinSpires. Kickoff is scheduled for 7 p.m. ET (ESPN+ | SiriusXM FC).

Legion FC visited Tampa Bay in last year’s Eastern Conference Quarterfinals and gave the Rowdies a test, coming back from a two-goal deficit to level the game early in the second half behind goals from Prosper Kasim and Bruno Lapa to level before the hosts pulled away in the final 15 minutes thanks to goals by Lucky Mkosana and Leo Fernandes to take a 4-2 victory. Birmingham has returned much of the core from that 2020 squad that helped drive its third consecutive trip to the playoffs this year, with leading scorer Neco Brett sitting on 18 goals this season and goalkeeper Matt VanOekel tied for third in the league with nine shutouts. There will be one new addition unavailable for Legion FC this weekend with Jamaican winger Junior Flemmings having been selected by his country for FIFA 2022 World Cup Qualifying contests against El Salvador and the United States, but the side will return to Tampa Bay with the aim of springing a surprise after its advancement last weekend past Pittsburgh Riverhounds SC due to a COVID-19 outbreak in the Hounds’ squad.

Fernandes and Mkosana were both on the scoresheet for the Rowdies in their postseason opener this year as well, with Fernandes notching a pair of goals in the side’s 6-2 victory against FC Tulsa and Mkosana recording one goal and two assists after coming on as a substitute. Tampa Bay is now undefeated in its last nine home games and hasn’t lost a home playoff game since the 2017 season. In addition to a stellar season from Fernandes, the side has seen major contributions from captain Sebastian Guenzatti – who notched his 22nd goal of the season against Tulsa to put the side ahead in the first half – and a strong defensive unit featuring goalkeeper Evan Louro and center backs Aaron Guillen, Forrest Lasso and Jordan Scarlett. After sinking six goals last weekend, the hosts will be hungry for more.