Where does Oakland Roots SC stand in the biggest surprise results in the league’s postseason? 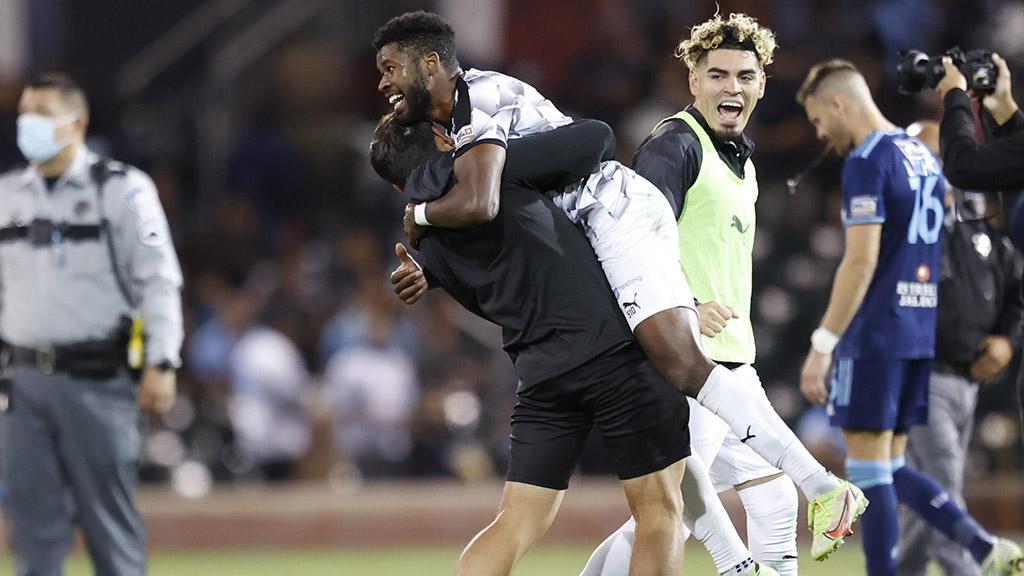 EL PASO, Texas – There’s a beauty to a postseason.

All the build-up, the noise surrounding the opening weekend of games, the picks, the underdogs, the brackets, and everything that goes into it? All of it disappears when the whistle blows.

Then it’s just two teams, playing for the chance to extend their campaign by one more game.

For Oakland Roots SC, the task of taking on the team with the longest home undefeated record in North America in El Paso Locomotive FC in its first game in the 2021 USL Championship Playoffs, presented by TwinSpires, could have been daunting.

Instead, after a 1-0 win secured by Jeremy Bokila’s goal with 14 minutes to go, it was the next step on the road for a team that has simply been taking what comes and making the most of it.

“The biggest thing, and I’ve said this all along, is that we take this one game at a time,” said Oakland Head Coach Jordan Ferrell. “That’s what’s gotten us here and that with that approach, we weren’t concerned about El Paso’s home streak, their ranking, our ranking, anything like that. It’s a matchup of two teams and I think that it feels good to come here to a strong footballing side like El Paso, I think they’re one of the best teams in the country and to get a good result, it feels good.”

Oakland was in many ways a match for its hosts. Yes, El Paso had a 20-11 shots advantage that saw Oakland’s Paul Blanchette come up with some big moments, but so did Logan Ketterer in the Locomotive FC net as he turned away chances for Johnny Rodriguez early and Emrah Klimenta before Bokila’s game-winner and Fissore afterward, whose chance to add an insurance goal with six minutes to go would have settled Roots SC’s nerves even further.

Then there was Kai Greene’s chance on the rebound after Klimenta’s header 10 minutes into the second half, sent into the supporters’ section instead of the net from close range. It’s the sort of chance you can laugh about afterward, just as long as you’ve won in the end.

“Like I’ve been saying, we keep missing sitters,” said Ferrell. “Matias and Kai [Greene] had the other one, even Johnny [Rodriguez] has that first chance of the game and went wide. I think for us as a group, not having been a team for a long time, the early part of the season where we didn’t find success, there were a lot of challenges. It’s very easy when you come together and start winning and everyone feels that momentum. You rely on some veterans, you rely on very optimistic youngsters, and I think that mix and as well people who bought in and looked around and said we had enough to be a playoff team.”

Oakland had proven itself worthy of that status before Friday’s win, but now it can rightfully consider itself one of the biggest giantkillers in the Championship’s postseason history.

Here’s our ranking of the Top Three Opening Weekend Upsets in the Championship Playoffs’ history.

Four years ago, Real Monarchs SLC was in no uncertain terms, a juggernaut. Upgraded wholesale with the likes of forward Chandler Hoffman and attacking midfielder Sebastian Velasquez and a crop of new faces, the side set a then-Championship record with nine consecutive victories, and by the end of the season under Head Coach Mark Briggs had claimed the Championship’s best record.

Twenty-one points further back in the standings sat Sacramento Republic FC, which had dropped considerably after its own early exit as the top seed a year before. Sacramento had to battle its way into the postseason, winning only one of its last six games as ninth-placed Colorado Springs Switchbacks FC’s three-game winning streak to close came just too late. After losing twice while failing to score in both of their meetings in the regular season, things didn’t look primed for an upset, but after the teams exchanged second half goals, the Championship’s all-time shutouts leader took over. Republic FC goalkeeper Evan Newton made saves on shots by Velasquez and Hoffman, which followed a miss by current Louisville City FC Head Coach Danny Cruz, and against all odds, Sacramento had advanced.

A newcomer to the league at the start of the season, Oakland Roots SC wasn’t a fashionable pick to make the playoffs in the Pacific Division, and even less so to win a game. It opened the week at the longest odds of any road team to win (+425) in this year’s opening weekend, and that had to do with two things – the 23-point gap between itself and El Paso Locomotive FC in the regular season, and Locomotive FC’s 25-game undefeated streak dating to July 24, 2000, which had become entirely its own legend. Southwest University Park was a place where visitors generally did not emerge with a point, let alone victorious.

But after going 13-0-3 in the regular season – tying the Championship’s single-season home wins record – time ran out on Locomotive FC as it began its bid for a third consecutive trip to the Western Conference Final, or better. Jeremy Bokila’s second-half goal proved the difference as Oakland produced what will arguably stand as the biggest surprise of the 2021 postseason on its opening night, all while giving Roots SC fans a night they’ll not forget for a long time.

It was supposed to be the start of the final coronation for Orlando City SC. Instead, it turned into the upset to end all upsets in the Championship’s history. The Lions, who had won 13 consecutive games at the ESPN Wide World of Sports Complex while renovations were undertaken at the Citrus Bowl for their first season in Major League Soccer the following year, had done it all in 2014. Regular season title? Clear by seven points. Golden Boot and Assists Champion recipient? Kevin Molino had 20 goals and nine assists to claim both. MLS-ready talent on the field? Orlando had signed and started to play its future in its present.

And then, thanks to the Harrisburg City Islanders and Antoine Hoppenot’s goal five minutes before the halftime break, resulting in a 1-0 victory for the visitors, it was over. Harrisburg’s was the No. 8 seed in a single-table format, ending the season 25 points behind Orlando. The City Islanders had made their way into the playoffs via a combination of strong second-half play, lucky red socks – introduced by Head Coach Bill Becher to try and pull his team out of a funk midseason – and determination. After Orlando’s final push fell short, its time in the Championship came to an abrupt end, and the City Islanders secured a famous victory.