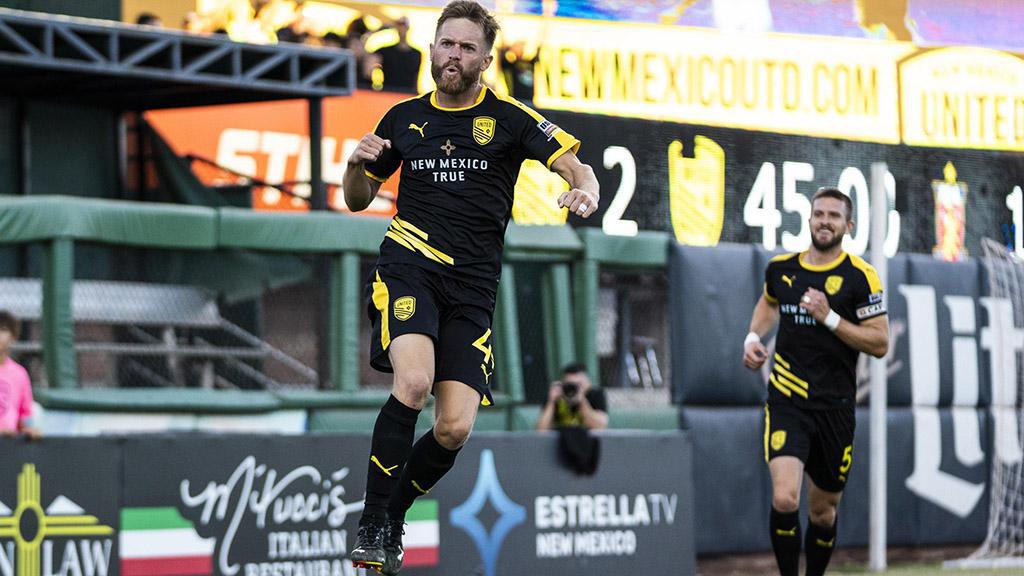 ALBUQUERQUE, N.M. – New Mexico United got a pair of goals from Chris Wehan and a goal and assist from Daniel Bruce to take a 3-1 victory against Real Monarchs SLC at Isotopes Park on Saturday night that briefly kept their hopes of reaching the 2021 USL Championship Playoffs, presented by TwinSpires alive with a rousing performance in the final game of the regular season, but those hopes were dashed later in the night as Rio Grande Valley FC's 4-1 win against El Paso Locomotive FC earned the Toros the final playoff place in the Mountain Division, leaving United on the outside.

New Mexico opened slowly, but after a nervous opening 10 minutes the hosts began to take control and in the 17th minute took the lead when Daniel Bruce received a pass as he moved into the right side of the penalty area and played a pass across the face of goal where Chris Wehan was on hand to tuck home from close range. The hosts almost doubled their lead in the 35th minute, too, when Josh Suggs found space as he moved up the left side and fired a shot that was tipped over the crossbar by Monarchs’ goalkeeper Jeff Dewsnup.

Real pulled level five minutes before halftime, however, as Charlie Wehan fired a long-range effort that New Mexico’s Alex Tambakis was unable to handle cleanly, offering up a rebound chance that Max Mata tucked away.

The hosts quickly tried to regain the lead before the break and in the final minute of the half Ilija Ilic had a close-range shot off a low ball from Bruce from the left turned wide at the near post. As the half moved into stoppage time, though, New Mexico got its chance when Andrew Tinari was brought down in the penalty area allowing Chris Wehan to step up and shoot low to the right corner from the spot to put United back in front.

The Monarchs threatened to level again eight minutes into the second half when Bret Halsey stole possession United’s half and after moving to the right cut a pass back for Sam Brown in space 25 yards from goal. Brown fired a low shot to the left corner, but Tambakis got down well to make the save.

New Mexico then began to get back on the front foot again, and after Dewsnup made a sharp save to keep out a near-post redirection off one of his defenders on a cross from the left, Kalen Ryden then shot just wide of the right post from the ensuing corner kick. Chris Wehan also went close to his hat trick in the 68th minute as he latched onto a pass by Ilic into the left side of the penalty area but sent his first-time finish past the advancing Dewsnup just wide of the right post.

Bruce provided the final touch for the hosts with nine minutes to go, however, as he ran onto a ball over the top by Justin Schmitt into the left channel and produced a lobbed finish from 25 yards that looped over the goalkeeper as he came off his line and landed in the right corner of the net.

Chris Wehan, New Mexico United – Wehan recorded a pair of goals as he finished the night with three shots and one key pass while completing 19 of 23 passes to help drive United’s attack in a must-win game.