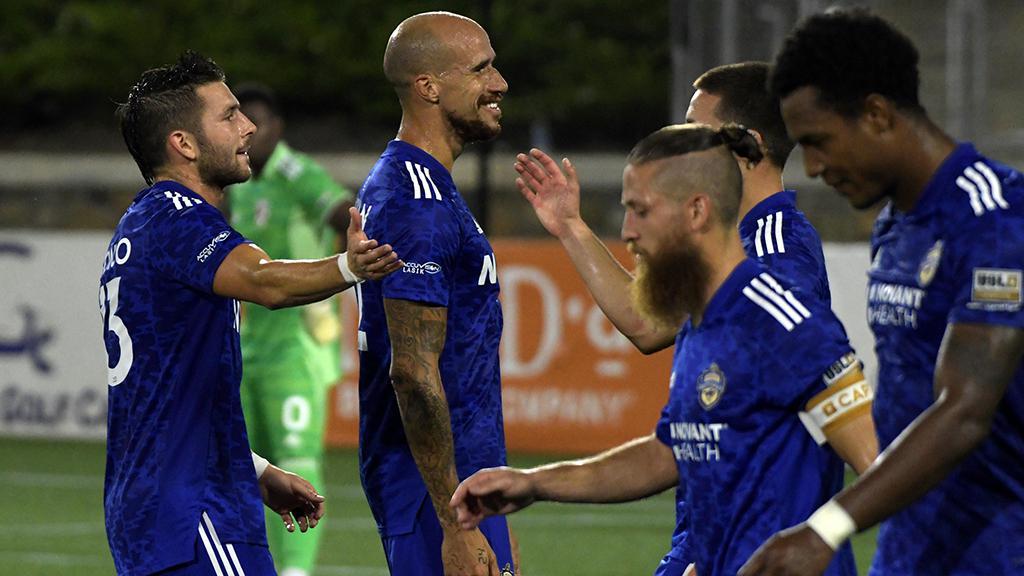 The playoff field is set in the USL Championship’s Eastern Conference going to the final day of the regular season on Saturday, but there’s still a lot to play for in terms of seeding, say nothing of the conclusion to one of the fiercest rivalries in the league as well. Here are five storylines to keep an eye on this Saturday night.

At the midway point of the season on August 1, the Charlotte Independence were sitting below the playoff line in the Atlantic Division, trailing Pittsburgh Riverhounds SC by 11 points, and while there was still plenty of optimism as to where the team was headed – at that point it was still rated a solid proposition to reach the postseason – the run the team has produced going 10-1-1 over its past 12 games has maybe even exceeded the best projections that could have been hoped for.

On Saturday night, the club will look to seal a home playoff game for a second consecutive campaign as it visits Austin Bold FC for its final game of the regular season. Sitting on a six-game undefeated streak as it heads to Texas after Wednesday night’s 1-0 win against Loudoun United FC kept the side one point ahead of the Hounds, the team is eager to seize the opportunity it has to get postseason action at American Legion Memorial Stadium.

“It will be massive for us, obviously, for the club,” said attacking midfielder Enzo Martinez. “The people are starting to come more and more to the game, so I think if we were able to host a playoff game it would be massive for the club and the city and for the people to enjoy such an event. … Same as last year, no-one thought much about us until the end when we made that huge push to take the home field advantage in the playoffs. This year is the same thing. We have one more game and we control our own destiny it would be awesome and a huge advantage for us to host the first round.”

As it enters its final game of the regular season against Birmingham Legion FC on Saturday night at BBVA Field, the greater pressure to deliver is going to be squarely on the shoulders of Louisville City FC’s players. After all, the two-time USL Championship title winner and three-time Eastern Conference title winner is the team that must take victory in a showdown for first place in the Central Division, while the hosts can cement their advantage with just a draw ahead of next week’s opening round of the playoffs.

With the visitors coming off a 3-1 victory last weekend against Memphis 901 FC, though, the mood in LouCity’s camp is optimistic that its experience in this type of do-or-die fixture could come to the fore. Louisville has the most wins in the Championship’s postseason all-time, posting a 15-3-2 mark in its 20 postseason outings in the club’s first six seasons, a sign of how strong the club has been when the chips are down.

“I think anytime you win, you gain a little bit of momentum,” said LouCity midfielder Corben Bone. “Going into October and into the playoffs, this group has always been a confident group. We have to maintain that and know that if we come in with the same drive that we’ve always had and the confidence going into the postseason, lean on everyone with experience in this group and the coaching staff, we put ourselves in a good position.”

Birmingham has been one of the best home teams in the league this campaign, too, but it’s recent history in this type of game is one the team will have to improve on. A year ago, Legion FC was in position to close out first place in its group with two games to go, but defeats in each of its final two games allowed the Charlotte Independence to jump into first on the final weekend of the season. Birmingham will be hoping to avoid a similar outcome this time around. 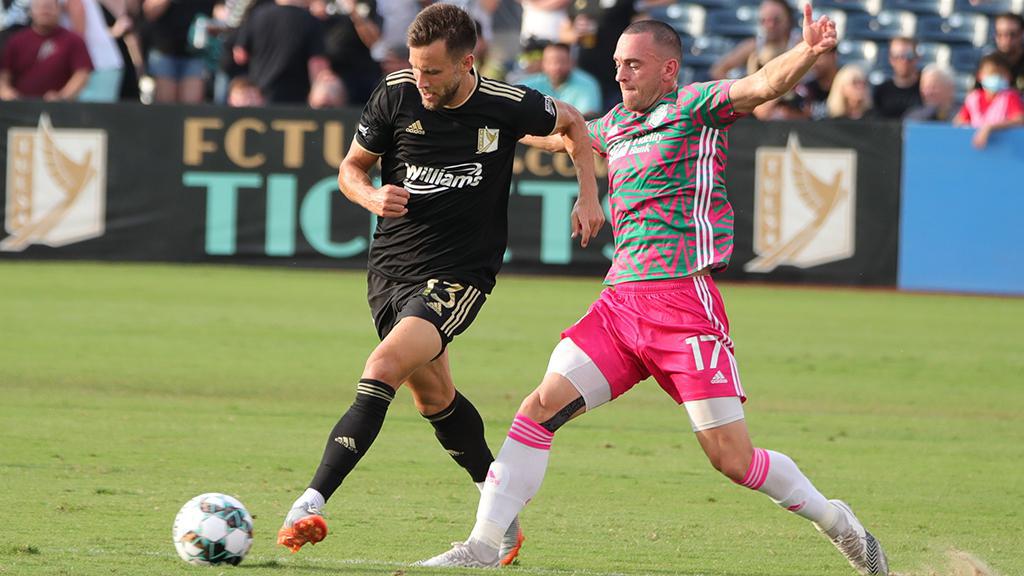 FC Tulsa and OKC Energy FC will decide the Black Gold Derby on Saturday night at ONEOK Field in a game that stands above the rest in both team's calendars. | Photo courtesy FC Tulsa

FC Tulsa didn’t get the result it needed on Wednesday night against Memphis 901 FC to take the battle for seeing in the Central Division to the final day of season, while OKC Energy FC was eliminated from playoff contention last weekend, but there will be little motivation needed for either side to end the season with a flourish as they meet to decide this year’s Black Gold Derby on Saturday night at ONEOK Field.

“That will be a super important one, especially for the fans and for us,” said Tulsa goalkeeper Austin Wormell. “We want to keep the Wrench. It will be a good test before we get to the Playoffs, it will be a super-important match.”

“We all know how important this game is to our fans and to help build momentum going into the offseason,” added Energy FC Head Coach Leigh Veidman. “We’re confident after our last trip up there that we can get another win and bring the Wrench back home. Our fans have had our back all year, and always have, and hopefully we can give them something to smile about.”

Tulsa holds a narrow edge in the series this season with a +1-goal differential after the teams each took one win apiece and drew in their prior three meetings. The last encounter between the sides on July 17 produced one of the best games they have played in the series, with Energy FC’s Hiroki Kurimoto scoring in the seventh minute of stoppage time to provide the winner in a 2-1 win after Tulsa’s Rodrigo da Costa had leveled six minutes prior. There might not be an impact on the standings on Saturday night, but the stakes could hardly be higher.

The Tampa Bay Rowdies’ learned their opponent for the Eastern Conference Quarterfinals of the 2021 USL Championship Playoffs on Wednesday night with FC Tulsa set to head to Al Lang Stadium on Saturday, November 6. Before that game arrives, though, the Rowdies have their sights firmly trained on a season finale that sees the side needing either a win or a draw against Las Vegas Lights FC at Cashman Field to lock up the best record in the Championship’s regular season.

After consecutive victories last week steadied the ship – including an outstanding 3-0 win in the club’s regular season home finale against Miami FC that saw Sebastian Guenzatti move past 20 goals for the season – rounding out the season in positive fashion is front of mind for Rowdies Head Coach Neill Collins.

“We want to win,” said Collins. “We want to give ourselves the best possible chance moving forward. So, no question we’ll want to get the points to do that. I think that would be a great achievement for the club. But by the same token, we’ve shown in the past that no matter what seed you are, you can go and do well in the playoffs. Whatever happens on Saturday, the next week will be a challenge, but it would definitely be a great achievement for the club to win the number one seed.”

The sense of excitement in the Memphis 901 FC locker room was palpable on Wednesday night as the side celebrated clinching the No. 3 seed in the Central Division after a 3-2 win against FC Tulsa at AutoZone Park, with the players and staff going full-out in celebrations ahead of their first trip to the USL Championship Playoffs.

From being projected for a fifth-place finish at the start of the season, 901 FC has built impressively over the course of the year while others in the division faltered. The wide array of newcomers to the squad came together under Head Coach Ben Pirmann to become a side that is enjoyable to watch as well as effective. The side has also overcome a growing injury list, testing the fitness of a core of eight players that have recorded at least 20 starts apiece, accounting for 56 percent of the team’s minutes.

“This is a really tight group,” said 901 FC defender Mark Segbers, who leads the team with 29 starts and 2,540 minutes of action. “I think our bond as a team shows when we go down a goal, we pick each other right back up. It’s the same when we win. We’re a bunch of brothers out there, and we’re just enjoying our time together. We take it a day at a time and enjoy every moment.”

901 FC will hit the road to begin its postseason journey next weekend after closing out the season against Indy Eleven in its home finale on Saturday night. After succeeding as one of the dark horses in this year’s regular season, there might still be more to come.