TAMPA, Fla. – The USL Championship announced the Team of the Week Presented by Cleer Audio for Week 27 of the 2021 regular season on Tuesday, with Louisville City FC forward Cameron Lancaster being voted Player of the Week after recording the second hat trick of his career in the Championship to lead LouCity to a 3-1 victory against Memphis 901 FC on Saturday night at Lynn Family Stadium that kept the two-time Championship title winners in contention for a first-place finish in the Central Division this season.

The 2018 Golden Boot winner opened the scoring in the 21st minute on Saturday night as he played a role in the build-up before heading home into the left corner off a ball from Jonathan Gomez from the left flank. Then in first-half stoppage time, Lancaster restored LouCity’s lead with a sensational long-range strike from 40 yards that outfoxed the goalkeeper and earned a place on ESPN’s SportsCenter Top 10 on Saturday night before wrapping up his hat trick from the penalty spot midway through the second half. Lancaster reached 20 goals for the season with his performance, becoming only the second player to register two 20-goal regular season campaigns in the league’s history after current Nashville SC forward Daniel Rios – and now sits fourth in the Championship with 71 career regular season goals all-time, one behind legendary Colombian forward Jorge Herrera on 72 and two back of current San Diego Loyal SC forward Corey Hertzog on 73.

Lancaster earned 46 percent of the ballot to claim the award. El Paso Locomotive FC’s Josue Aaron Gomez finished second on 31 percent after recording three goals and two assists across a pair of victories for the Mountain Division title winners that kept Locomotive FC in the running for the best record in the Western Conference going to the final day of the season this Saturday. 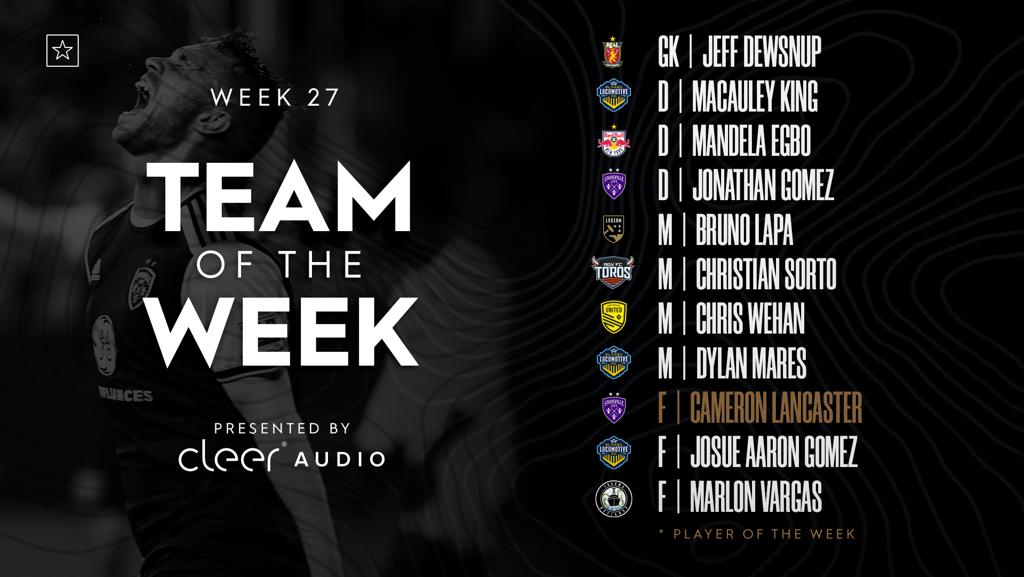 GK – Jeff Dewsnup, Real Monarchs SLC: The 17-year-old recorded a nine-save performance, including a penalty kick save to deny current Championship Golden Boot leader Hadji Barry late in the first half, as the Monarchs held Colorado Springs Switchbacks FC to a 1-1 draw on Friday night.

D – Macauley King, El Paso Locomotive FC: The English full back recorded a pair of goals off set pieces in Locomotive FC’s 4-0 win against OKC Energy FC on Sunday night while also winning 3 of 3 duels and completing 30 of 33 passes as Locomotive FC completed an undefeated home slate this regular season at 13-0-3.

D – Mandela Egbo, New York Red Bulls II: Mandela Egbo scored once and had three shots overall in the Red Bulls II’s 3-0 win against Loudoun United FC on Wednesday night and defensively won 2 of 2 tackles and 7 of 12 duels and made three clearances.

M – Chris Wehan, New Mexico United: Chris Wehan powered a 4-2 victory against San Antonio FC on Wednesday night with an individual performance that saw him score twice and register a single-game career best nine shots and five shots on target to play a role in all four goals at Isotopes Park.

M – Dylan Mares, El Paso Locomotive FC: Dylan Mares recorded three assists across two victories for Locomotive FC during the week while finishing with eight key passes overall. He also completed 74 of 92 passes and made 11 recoveries over the two outings.

F – Cameron Lancaster, Louisville City FC: The English standout recorded the second hat trick of his career in the Championship, notching all three goals in LouCity’s 3-1 win against Memphis 901 FC to reach 20 goals for the regular season while also completing 14 of 18 passes.

F – Marlon Vargas, Tacoma Defiance: The 20-year-old recorded three assists in the Defiance’s 3-2 victory against the LA Galaxy II on Sunday afternoon, becoming the 22nd different player to do so in the league’s regular season, while also completing 18 of 22 passes and 4 of 6 dribbles and winning 7 of 11 duels.