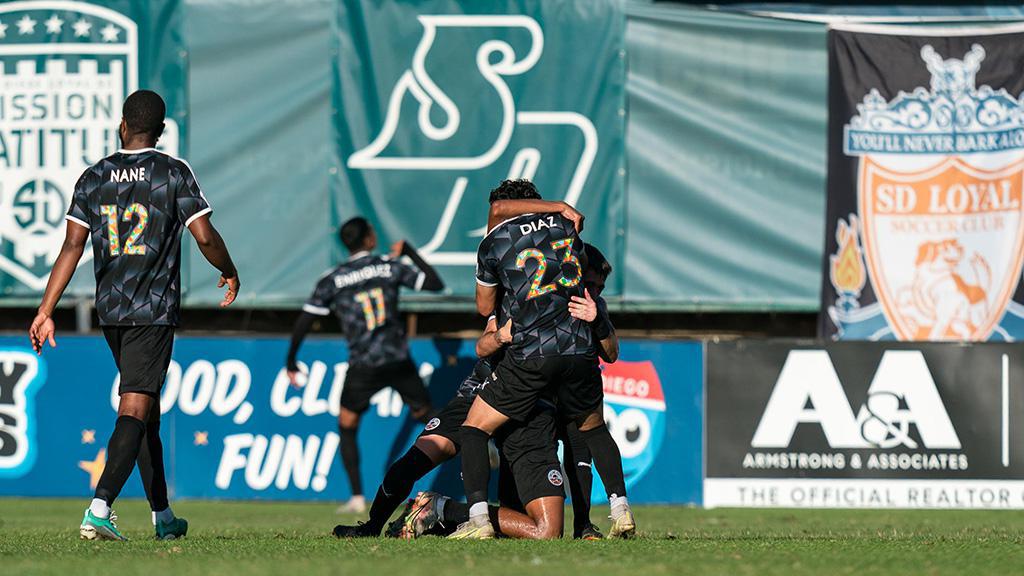 Six teams are still alive for the final two places in the Western Conference side of the bracket in the 2021 USL Championship Playoffs, but there was even more that this weekend brought in terms of twists and turns to impact the picture overall. Here are five things we took away from the action.

As critical as three points were for both sides on Sunday afternoon late in the game, with San Diego Loyal SC trying to regain second place in the Pacific Division and Oakland Roots SC simply trying to ensure it went to the final game of the campaign with a chance at the postseason, the stretched nature of a captivating contest that had already seen six goals shared between the teams to leave them even was understandable. When Oakland – reduced to 10 men after San Diego’s equalizer with four minutes to go – grabbed the chance for a winner from the penalty spot when Johnny Rodriguez was brought down in the 18-yard-box, though, a wild weekend in the Pacific came to a head.

Jeremy Bokila stepped up and shot high to the left side of the net beyond the dive of SD Loyal’s Austin Guerrero and gave Oakland not only its best attacking output of the season, but a 4-3 victory that left Roots SC as one of three teams to fight for one spot on the final day of the season.

“People have been asking me about the playoff race for the last month,” said Oakland Head Coach Jordan Ferrell. “I think we’ve maintained that we always focus on the game ahead of us, and also we’ve had a feeling that it would come down to the last game of the season. A big advantage there is that we’re going to be at home, and we know that the Laney crowd is going to be rocking. It’s important that we come in and focus so that we get those last three points.”

On paper, Oakland appears to have the easiest assignment as it hosts Sporting Kansas City II with the LA Galaxy II – still in the driver’s season knowing a win puts them in – hosting the Orange County SC side San Diego now has to pass for second place, and Tacoma Defiance getting the unenviable task of trying to get as result on the road against Phoenix Rising FC. If Oakland’s destiny is a playoff berth in its first season in the Championship, Sunday might have been the final omen we were looking for.

San Diego Loyal SC’s loss was all the more difficult for the hosts given that only 18 hours earlier it had been Orange County SC that had been the beneficiary of its own stoppage-time goal to pull a 2-1 victory out of the fire against Las Vegas Lights FC in its home regular season finale at Championship Soccer Stadium. The hosts had done everything including score as Eric Calvillo put them ahead in the second half, but shots off the woodwork and a remarkable performance by Las Vegas’ Alex Rando had kept OCSC from adding to its lead.

When Las Vegas caught Orange County with a sucker punch a minute into stoppage time when Dylan Presto’s cross from the right found Danny Trejo knifing in at the back post to finish on Lights FC’s only shot on goal of the game, it felt like Orange County had missed out. But the hosts found their own moment of stoppage time magic thanks to Haitian international Ronaldo Damus, who came up with another key goal three minutes later to restore OCSC’s lead in the nick of time and put the side in line to host a playoff game to start the postseason two weekends from now.

“First of all, obviously, [there was] an initial emotion where I can't believe we've missed our opportunity, but then you have two or three seconds, and I said to the team, it's like, from the ball going in the back of the net [for Vegas], to the ball going back on the spot for kickoff, we've got to go again,” said Orange County interim Head Coach Richard Chaplow. “And what we did tonight was we didn't give up. I was hoping we get one more chance. This game normally gives you one more chance. And luckily we were able to take that chance.” 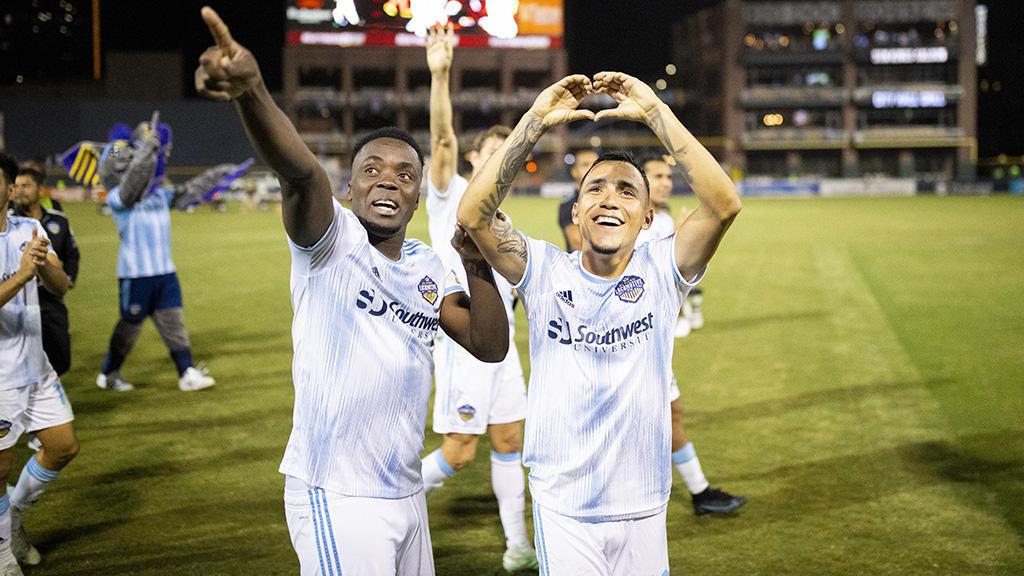 El Paso Locomotive FC had a chance to accomplish a first in club history on Sunday night in completing an undefeated home slate in its regular season, and with a remarkable flurry of four goals in eight minutes to close the first half – which almost turned into five when Josue Aaron Gomez hit the crossbar deep in second-half stoppage time – the side’s 4-0 win against OKC Energy FC at Southwest University Park provided another sign that the club has taken another step forward toward its goal of lifting the trophy at the USL Championship Final in November.

“It was good to do this at home,” said Head Coach and Technical Director Mark Lowry. “We gave the fans some goals. It was a great crowd tonight for our last home game of the regular season. It was good to give the crowd – the fans who have been with us for three years – that ending to a season. They saw some goals and they saw some good play. It was on TV and it’s always even better to do it when it’s a nationally televised game. We could really show people what we can do.”

The club’s new additions in Luis Solignac and Diego Luna can get some credit for the heightened attacking presence El Paso now has. The side has recorded 55 goals – 44 of which have been assisted – so far this season, a strike rate of 1.77 goals per game, up from 1.5 per game in last year’s abbreviated regular season. Gomez’s performance might be the biggest bellwether of the team’s improvement, though, as from a campaign a season ago in which he notched only a 10.2 percent shot conversion rate, Gomez is now tied for the team-lead with 10 tallies at a 19.2 percent shot conversion rate. With all systems go, Locomotive FC is on the hunt for postseason success.

It has been a frustrating year for Rio Grande Valley FC’s Kyle Edwards. The St. Vincent and the Grenadines forward has played only 10 games for the Toros due to challenges with visas and until Saturday night had yet to find the net. His goal just before the hour-mark on Saturday night that added to Rodrigo Lopez’s opener at H-E-B Park against New Mexico United not only provided a breakthrough individually but might have breathed new life into the Toros’ playoff hopes.

“It’s very, very overwhelming,” said Edwards after the game. “I’ve been looking forward to this moment since I got here, actually, and I’ve been getting close, and close, and finally I really got it in the net. So, it’s been a really good feeling, a very overwhelming feeling and I hope to score more and get us into the playoffs.”

With two games remaining, Rio Grande Valley is now two points behind New Mexico thanks to its victory and can move into fourth place should it take victory against Real Monarchs SLC on Wednesday night while United waits to play its final game of the season on Saturday. With a playoff place on the line, Edwards could have another big role to play as part of an RGVFC squad that has given itself a chance to shine in the final week.

There was an air of complacency about Phoenix Rising FC’s first half performance against Sacramento Republic FC on Saturday night, and while the side knew that it had to win to keep pace with the Atlantic Division title-winner Tampa Bay Rowdies for a chance at the best record in the Championship and homefield advantage that would come with that in the postseason, it not only trailed at the break but did so without really threatening to answer Luis Felipe Fernandes’ goal for the visitors.

“We bored our fans in the first half,” said Rising FC Head Coach Rick Schantz. “We were too slow. We were not sharp. We tried a few different player combinations this game and we got a lot of answers. Had we lost, I would have been upset but they showed a lot of heart and emotion. What you saw was a team that didn’t feel desperation. This is the hard part. When you clinch your division and things are going really well for you, you forget what it feels like to be desperate to have to win a game.”

Phoenix will get another side desperate for victory in its home finale this Saturday night with Tacoma Defiance’s season on the line as Sacramento’s was this past weekend. With the chance at homefield advantage in the Western Conference still to be clinched ahead of El Paso Locomotive FC, the way Rising FC opens its regular season home finale could be telling.