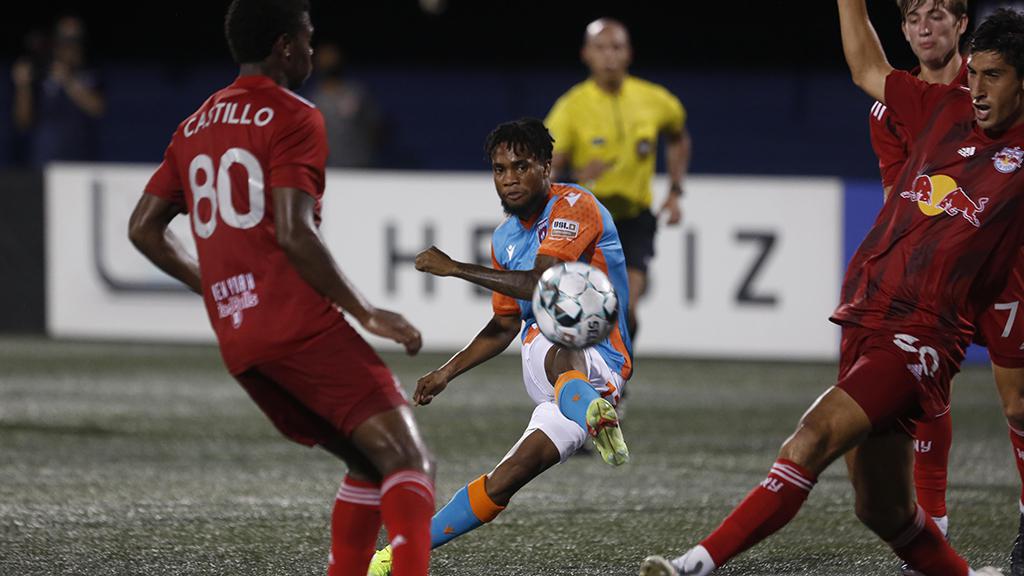 Miami FC forward Lamar Walker will look to lead his side to another home victory against the New York Red Bulls II on Sunday night as the sides meet for the final time this season. | Photo courtesy Orovio Photography / Miami FC

MIAMI – Miami FC plays host to the New York Red Bulls II on Sunday night at FIU Stadium looking to rebound from a midweek defeat that kept the side in fourth place in the Atlantic Division standings against a Red Bulls II side that has lost just once in its last five games after midweek victory. Kickoff is scheduled for 7:30 p.m. ET.

@TheMiamiFC (14-9-7, 49pts) dropped a 3-0 defeat to in-state rival the Tampa Bay Rowdies on Wednesday night as the hosts got a pair of goals and an assist from captain Sebastian Guenzatti and the visitors failed to register a shot on target at Al Lang Stadium. The contest marked the second consecutive game in which Miami was held scoreless, and the side will see addition action in the final week of the season following an announcement by the USL Championship on Friday that the final 23 minutes of the club’s contest on October 16 against Pittsburgh Riverhounds SC will be replayed with Pittsburgh holding a 1-0 lead after a refereeing error had denied the Hounds a goal at FIU Stadium. Miami has been one of the brighter attacking teams in the Championship this season with the club tied for eighth in goals on 49 this season and Haiti international Christiano Francois leading the team with 10 goals individually. The hosts will be looking to find that attacking spark to keep its chances of moving up from fourth place alive as they try to chase down the Charlotte Independence and Pittsburgh in second and third place respectively.

@NYRBII (6-17-7, 25pts) have no such playoff aspirations going into their final two games of the season, but the side will be looking to build on a 3-0 victory against Loudoun United FC on Wednesday night that saw Cameron Harper record a goal and assist and goalkeeper AJ Marcucci record his third penalty kick save of the season. Marcucci is now second in the league in penalty kicks saves this season behind Hartford Athletic’s Jeff Caldwell on five and has made two in his last three outings having also denied the Charlotte Independence’s Irvin Parra on October 9. New York has taken six points from its past five games overall after securing draws against the Atlantic Division-leading Tampa Bay Rowdies in its last trip to Florida on October 15 and will be looking to find a first win against Miami this season after falling 3-0 when they last visited FIU Stadium on August 29. They will have to try and do so without experienced defender Mandela Egbo, however, who will serve a one-game suspension for caution accumulation on Sunday night.