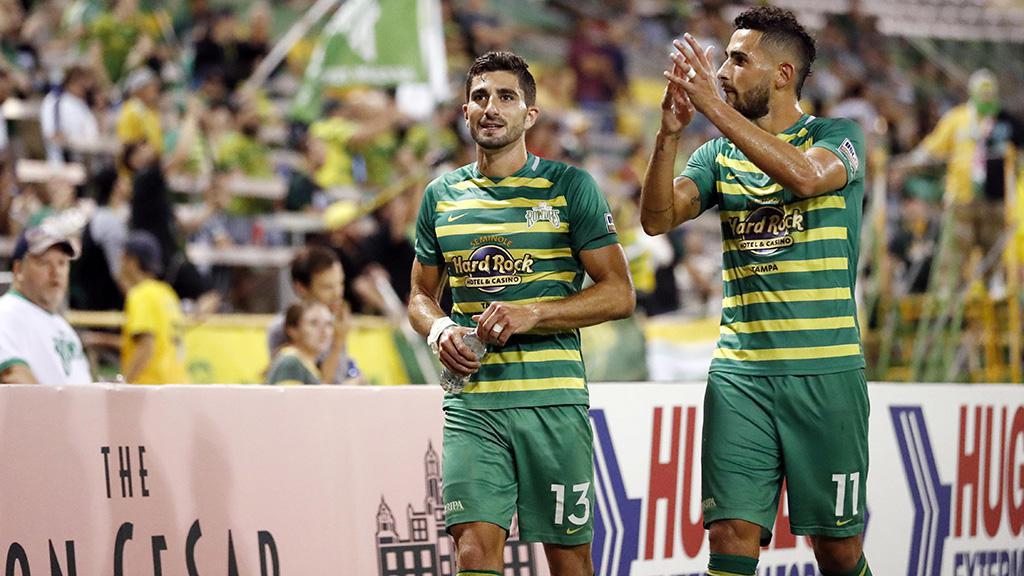 The Tampa Bay Rowdies' Sebastian Guenzatti (center) has recorded 12 goals since the start of September, and is closing in on the club's all-time goalscoring record as a result. | Photo courtesy Matt May / Tampa Bay Rowdies

The eight playoff berths in the USL Championship’s Eastern Conference could be settled this weekend, but there is potential history to be made as well for individuals as we enter the penultimate weekend of the campaign. Here are five storylines to follow over the weekend’s action.

When Georgi Hristov set a new mark for the Tampa Bay Rowdies all-time scoring record, passing Derek Smethurst’s mark during the 2018 season, the 60 goals he ended his career with in Green and Gold seemed a mark that could take some time for someone to surpass.

Three years later, current Rowdies captain Sebastian Guenzatti sits on the verge of that record as Wednesday night’s pair of goals against Miami FC in the 3-0 win that clinched Tampa Bay the best record in the Championship’s Eastern Conference took the 30-year-old to 50 goals since the start of the 2019 season across the regular season and playoffs in the league and to 57 overall for Tampa Bay. Guenzatti’s scoring rate since the start of September has been remarkable, recording 12 goals in 10 games at a rate of a goal every 58.8 minutes as his form in earning September’s Player of the Month award has barely abated into October. He’s now the ninth player in the Championship’s history to surpass 20 goals in a season, giving him the Rowdies’ single-season record as well, in what has been a spectacular year so far.

With games against Loudoun United FC – which sits second in goals conceded this season at 72 goals against – on Saturday night and then a season finale against Las Vegas Lights FC – which has conceded the most goals in the league at 73 goals against – to close the regular season next weekend, there’s a chance that there could be a new goalscoring record-holder in Rowdies’ colors before the postseason begins.

As one of only a handful of players to have appeared in every season of the USL Championship’s history, Charlotte Independence forward Dane Kelly has been among the league’s icons over its first decade. On Friday night, the Jamaican forward gets a shot at becoming the first player to reach a century of regular season goals as the Independence visit Hartford Athletic at Dillon Stadium after his two goals against former club the Charleston Battery last Saturday night moved him to 99 for his career.

The omens are good for the mark to fall. Charlotte has defeated Hartford in each of their three prior meetings, with Kelly having scored the game-winner when the teams last met at Dillon Stadium on September 30 with seven minutes remaining. That was his second goal in as many appearances this season against the Athletic as well, one of 40 teams Kelly has scored against while competing for six teams across the past 11 seasons.

When the moment arrives, it will mark a notable moment in both Kelly’s career, and in the league’s history as his longevity and success has offered a mark for those that are now chasing him to catch. 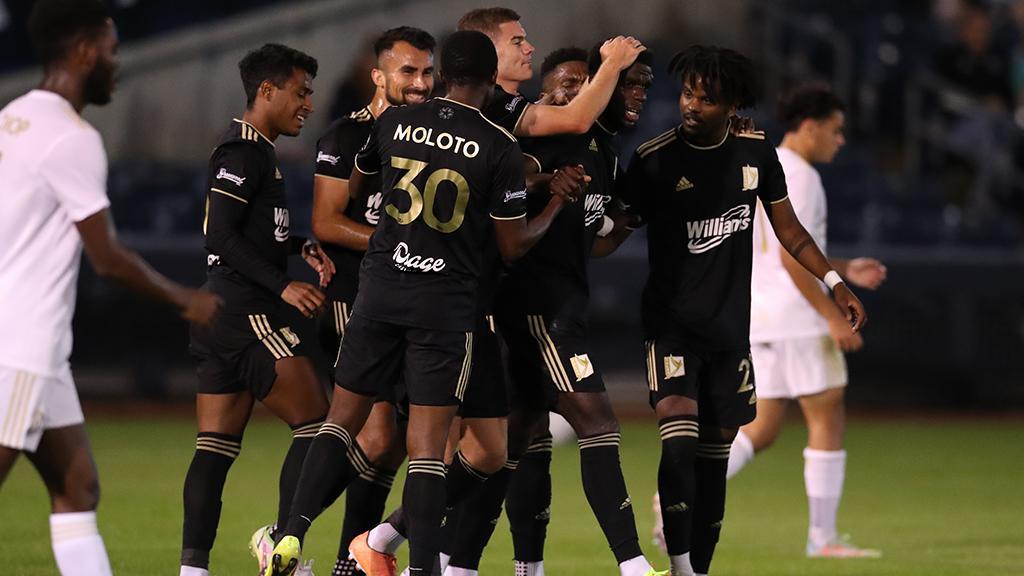 FC Tulsa's 4-0 victory against Atlanta United 2 on Wednesday night saw the side snap a six-game winless streak, and now it's looking for a strong ending to the campaign before a potential postseason run. | Photo courtesy FC Tulsa

FC Tulsa’s season has been filled with ups and downs, but Wednesday night’s 4-0 victory against Atlanta United 2 not only brought the side within a point of clinching its second consecutive trip to the USL Championship Playoffs, but for Head Coach Michael Nsien was hopefully the start of a final upswing that could continue into the postseason. Having recorded the club’s first multi-goal performance since its most recent win – a 2-1 victory against Indy Eleven on September 8 – and a first shutout since the side’s 1-0 victory against Louisville City FC on September 3, Tulsa showed how efficient it can be when at its best in its penultimate home game of the season.

“I’m sure every team wants to find their form heading into playoffs,” said Tulsa Head Coach Michael Nsien. “For us, we haven’t scored multiple goals in some time, and we haven’t had a clean sheet in some time, so that just says that things are falling in the right place for us at the right time. It’s been a long time since that’s happened, so the players can go away from this confident and hopefully we can just continue to do a good job, get healthy, and go as far as we can. So, the next one up is Indy Eleven and we have to go and get those points.”

Tulsa had gone on a five-game winning streak prior to the six-game winless streak that concluded on Wednesday night, a pair of runs that have epitomized the club’s year overall. Another streak that came to an end for the side was an individual one as Joaquin Rivas notched a pair of assists, getting him on the scoresheet for the first time in a league game since August 8. With a chance still to pick up third place in the Central Division, following up with another positive performance against Indy Eleven on Saturday night would be another strong display would only add to Tulsa’s potential momentum heading into the postseason.

It’s a potential showdown we’ve been anticipating since the start of the month’s action: Birmingham Legion FC vs. Louisville City FC on October 30 at BBVA Field with first place on the line in the Central Division. But after the past two outings ended in defeat for LouCity, the potential is now there that game will be little more than pride should Louisville City FC not take victory on Saturday night in its regular-season home finale against Memphis 901 FC at Lynn Family Stadium. So, as appetizing as next weekend’s game could be, the focus for Louisville and Head Coach Danny Cruz has been on 901 FC, and 901 FC alone, this week.

“The focus is on Memphis,” said Cruz. “Being back at home again, we’re certainly looking forward to that, at Lynn. We have a job to do this weekend, that’s certainly the focus. That’s been the messaging to the group. If we take care of business this weekend, then we can put the focus on Birmingham.”

There should be little motivation needed for Louisville going into the contest. Aside from the chance to keep its hopes of a first-place finish in the division alive, Saturday also brings a chance to turn the tables on Memphis, which took a 2-1 victory on a late goal by Mark Segbers when the teams last met at AutoZone Park just over a week ago on October 13. With 901 FC also in need of a victory to ensure it remains ahead of FC Tulsa for third place in the standings at the end of Saturday night, it should make for a compelling contest between the postseason-bound clubs.

MIAMI AIMS TO STRAIGHTEN OUT PERFORMANCE

Miami FC is heading to the postseason, but has looked far from its best over the past two outings in which it was held scoreless by both Pittsburgh Riverhounds SC and the Tampa Bay Rowdies in the past week while being held to limited chances in both games by their fellow playoff sides in the Atlantic Division. Miami, in fact, didn’t register an official shot on goal against Tampa Bay on Wednesday night in a 3-0 defeat that saw the side struggle to find clear chances as three of their five overall shots were blocked by the Rowdies’ stout defensive unit.

With two games to go until the postseason arrives, starting on Sunday night in the club’s home finale against a New York Red Bulls II side that has shown its own improvement in the closing stages of the season, finding a pair of positive performances is the focus for Miami Head Coach Paul Dalglish to try and carry some momentum into their first USL Championship Playoffs appearance.

“We’ve got a game coming up at home in a few days’ time, so we can’t feel sorry for ourselves,” said Dalglish on Wednesday night. “We’ve got to lick our wounds, take it on the chin like men and bounce back against New York. We want to go into these playoff games on the back of two good performances. That’s got to be our objective going into training.”