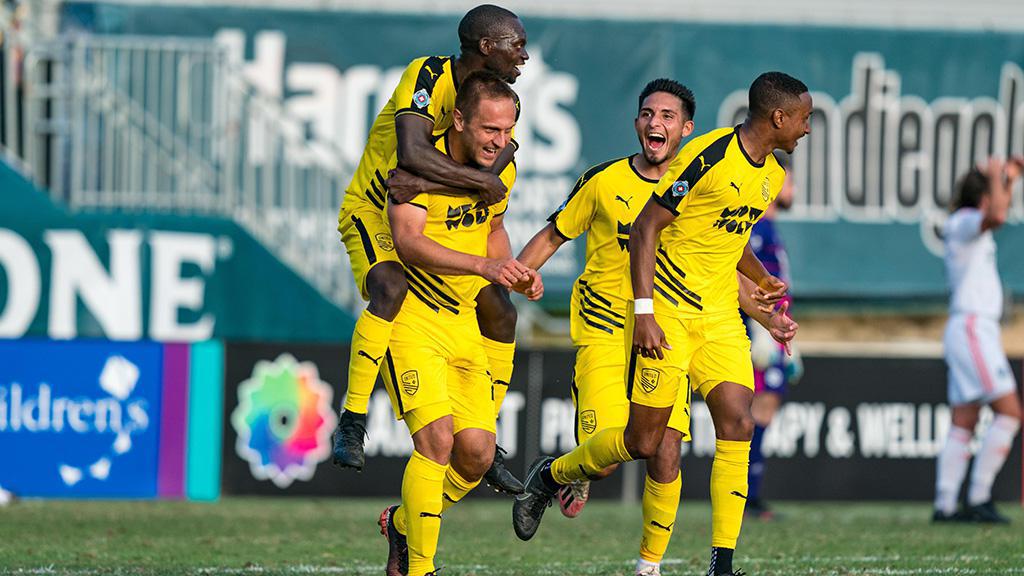 From high-scoring action on Saturday afternoon to some decisive late goals that could shape the race in the Mountain Division and maybe the most surprising final score of the season, there was plenty to take in across the USL Championship’s Western Conference this weekend. Here are five storylines we took away.

After both Austin Bold FC and Rio Grande Valley FC had suffered defeats in Saturday’s action, the door had opened a little wider for New Mexico United and its playoff aspirations. As stoppage time wound down in the side’s contest against San Diego Loyal SC at Torero Stadium, however, it looked as though the same fate would befall United as it trailed by a goal having been held off the scoreboard by an inspired performance from San Diego goalkeeper Austin Guerrero.

But with what proved to be almost the final kick of the game, Ilija Ilic scored with a composed volley from Isidro Martinez’s cross on the right in the fourth minute of stoppage time to earn a result that could in the end tilt the playoff race in New Mexico’s favor.

“I'm so proud of the group for continuing to push on in that game,” United Head Coach Troy Lesesne told the Albuquerque Journal’s Ken Sickenger. “I think we've been doing that all year. Sometimes we've come up short in other draw situations or ended up losing a match, but guys continue to believe in what we're trying to do.”

The result moved New Mexico ahead of Austin thanks to a head-to-head tiebreaker of goal differential and into fourth place in the Mountain Division ahead of a potentially decisive week for the side. Facing San Antonio FC at home on Wednesday night before a visit to Rio Grande Valley FC, the race is still wide open for all three sides in contention, but New Mexico’s determination to see a big road result over the line was crucial as its rivals faltered this weekend.

Phoenix Rising FC’s Aodhan Quinn said last month that to be considered a top player in the Championship, he needs to compete in finals and win titles. That may still be the case, but the attacking midfielder continued to add to his impressive resume on Saturday afternoon in a wild 6-3 victory on the road against Las Vegas Lights FC that moved Rising FC to 65 points and kept the pressure on the Tampa Bay Rowdies to potentially win out to claim the best record in the Championship at the end of the season.

Quinn not only became the 21st player in the Championship’s history to record a three-assist outing – and the second Phoenix player this season after teammate Solomon Asante against the LA Galaxy II on July 17 – but he also moved into a tie for the league-lead with 11 assists this season with Hartford Athletic’s Danny Barrera and into a tie for third in league history with Asante on 41 regular-season assists for his career. The drive that Quinn continues to show helped steady Phoenix after it surrendered a pair of goals to Lights FC’s Cal Jennings after quickly taking a three-goal lead and pushed it on to an important bounce-back win.

“Anytime you can go on the road and get a good, commanding victory, it’s a good day,” said midfielder Joey Calistri, the beneficiary of one of Quinn’s assists. “There were a lot of good performances. A lot of guys played really well. We’ll look to carry that into next weekend.” 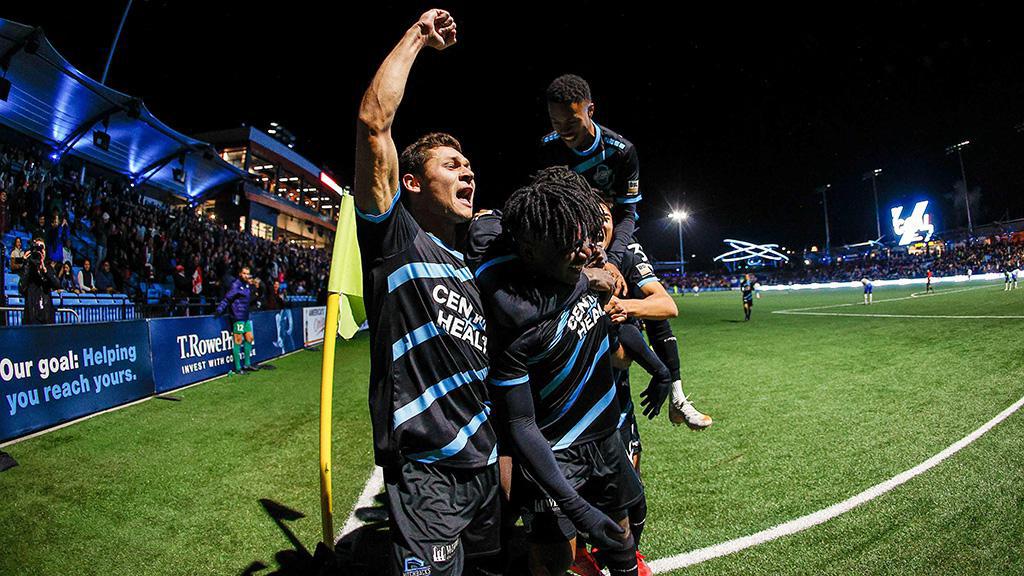 While Colorado Springs Switchbacks FC has been able to call on the consistent threat of Hadji Barry for the full season, injuries elsewhere in the attacking third of the field have meant some mixing and matching for the side as it looks to not only clinch a playoff berth but also vie for a second-place finish ahead of San Antonio FC in the Mountain Division.

On Saturday night, one of the returnees to the squad made a key different as Thomas Amang provided the stoppage-time winner against Rio Grande Valley FC, coming on for his first appearance since September 25 to put away a pass from Hadji Barry that moved Colorado Springs back level on points with San Antonio and only two points from a playoff berth. Combined with the return of Zach Zandi, and the Switchbacks are gaining more experienced pieces to help their postseason aspirations next month.

“Yaya [Toure] started a string of games for us at 17 years old, and [Darren] Yapi played a part at 16 years old, so we have guys that are just getting started with their careers, but our locker room also recognizes that guys like Zandi and Amang have a different level right now at this point in their career, they’re getting near their prime,” said Switchbacks Head Coach Brendan Burke. “Amang is still very young, but I would still feel comfortable saying that because he has so much pop going forward. The other guys in the locker room recognize that so when you get them back healthy and start to put them on the field it gives everyone an emotional boost, like, we have even more pop now.

“It was great to have both of those two on the field tonight, and you can expect to see a whole lot more of them over the next few weeks.”

It was in terms of scoreline the toughest night in El Paso Locomotive FC’s short history. Prior to Sunday’s 5-0 defeat to the LA Galaxy II, the side had not conceded more than three goals in an official game since the start of its inaugural season in 2019, and all the time Los Dos rarely seemed likely to call the pressure off as its talented young players continued to push in what would be as it stands a playoff matchup in November between the Mountain Division title winners and the fourth-placed team in the Pacific Division.

There should be some caveats applied to the result, though. For one, El Paso has been hit hard by injuries to its back line and central midfield of late and it’s likely the presence of both Mechack Jerome and Yuma in the center of defender or Richie Ryan in midfield could have made a difference. The performance wasn’t one goalkeeper Logan Ketterer will look back on happily either as the Galaxy II’s approach cutting in from the right flank and going to the far corner of the net produced two goals for Jorge Hernandez and Cameron Dunbar and began the sequence that led to a third after Ketterer’s parried save ended up being put away at the second attempt on the rebound by Preston Judd.

What Sunday’s game should reveal more, though, is that the Galaxy II do have to tools to give opponents a scare should they make the postseason – a likely proposition at this point given the rest of the division’s results moved Los Dos to a 91% chance to be in the postseason according to fivethirtyeight.com. With Judd and Hernandez each in double-digit goals this season – making the Galaxy II one of only two teams with that in their ranks alongside Dane Kelly and Irvin Parra for the Charlotte Independence – Los Dos might not be as easy an out as their record indicates right now.

It was one of those nights where almost everything was right for San Antonio FC except its finishing, which was how it both out-possessed and out-shot FC Tulsa but only came away with a 1-1 draw at Toyota Field to miss out on clinching a playoff berth on Saturday night. The hosts managed to put only two of its 19 efforts on target as Tulsa’s defense did its part in blocking four shots, but the performance left the hosts optimistic that it will start to take the numerous chances it has started to create as the playoffs approach.

“It’s a good thing we are creating so many chances because other teams don’t do that,” said SAFC defender Sam Gleadle. “The more chances we create the more goals we will score. When you look at the type of chances we create; if we keep creating high-level chances then we have confidence guys will put it in the back of the net.”

San Antonio does rank among the best teams in Chance Creation in the Championship, ranking fourth according to American Soccer Analysis with an Expected Goals total of 49.87xG, the highest of any team in the Mountain Division. The side’s 45 goals sit marginally below that mark, however, a sign that the pressure the side has been able to build hasn’t always produced the required payoff, as against Tulsa on Saturday. Finding that consistency over the final three games would not only seal at least one home playoff game, but give San Antonio a good confidence boost as it enters the postseason.