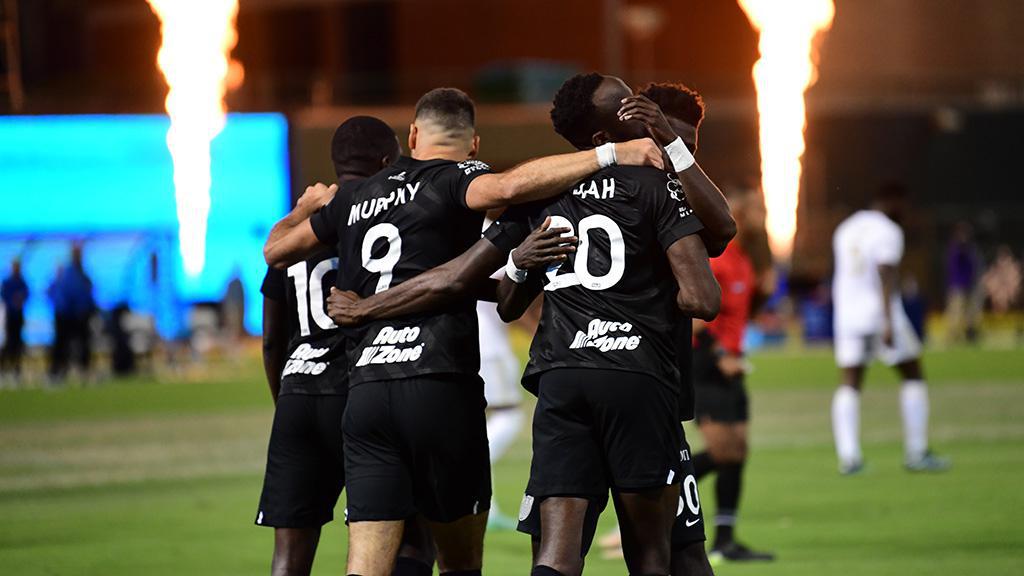 Memphis 901 FC booked its place in the USL Championship Playoffs for the first time over the weekend as its late-season surge pushed it above the pack in the Central Division. | Photo courtesy Eric Glemser / Memphis 901 FC

Three more postseason berths were decided over the past weekend in the USL Championship’s Eastern Conference as one familiar face and two newcomers booked their places in the bracket. Here are five talking points coming out of the weekend’s action.

Memphis 901 FC was left to wait until Sunday evening to celebrate officially, but the aftermath of the club’s 4-2 victory against Atlanta United 2 on Saturday night felt like the celebration of a team that knew it had done enough to book its first postseason berth in the club’s third season. When OKC Energy FC’s scoreless draw with Birmingham Legion FC went final the following day, the celebration could begin again as one of the Central Division’s dark horses at the start of the season continued its remarkable late-season run under Head Coach Ben Pirmann.

“Our goal since the players arrived in April was non-wavering: do whatever it takes to make the playoffs,” said Pirmann. “I am so proud of this group of men and our staff. They’ve put every ounce of their beings into achieving that goal. I’m excited for our players and our club, but I’m also thrilled for our supporters and this community. We will continue to focus on improving on the pitch and push as hard as possible to make our supporters proud.”

The key for 901 FC has been its ability to rise to the moment when others below them have faltered. In the club’s past 10 games it has gone 7-2-1, with its two defeats coming against non-division opponents in Miami FC and San Antonio FC. When it’s been faced with the teams it needed to beat to earn its spot, 901 FC has come through impressively – the run began with Raul Gonzalez’s remarkable stoppage-time winner against Birmingham Legion FC – while recording multiple goals in eight of the 10 games as others have stepped up in support of leading scorer Kyle Murphy.

Does that mean Memphis can make a run in the postseason? Those non-division results that saw the lone victory come against the New York Red Bulls II might throw some double on that, but the way this side has come together and grown has been impressive to watch and gives 901 FC a platform to build on whatever happens this postseason.

INDY GLAD TO EARN BRAGGING RIGHTS FOR FANS IN LIPAFC

The 2021 season has not gone close to the way Indy Eleven envisioned at the start of the campaign, but while a playoff place remains distant with two games to play, Saturday brought some kind of silver lining in claiming the first season series in the Louisville Indianapolis Proximity Association Football Contest on Saturday night since it had joined the Championship in 2018 with a 1-0 win against Louisville City FC at Michael A. Carroll Stadium.

“I think it’s more for the fans, to be honest with you, it’s bragging rights for them,” said interim Head Coach Max Rogers. “In the team we want to look at the bigger picture more and get into the playoffs and be challenging for things higher up the table. But for the way this year has gone there’s no reason why we can’t be very pleased with how we’ve done in the series [against Louisville].”

Manuel Arteaga’s goal with five minutes to go proved the decisive moment in the game, but the fact Indy had made it to that point without conceding was thanks to goalkeeper Jordan Farr. In an up-and-down season individually, Farr came to the fore against LouCity in a five-save shutout that kept the hosts in the game and allowed the opportunity for Arteaga’s 10th goal this season to give the fans something to celebrate. 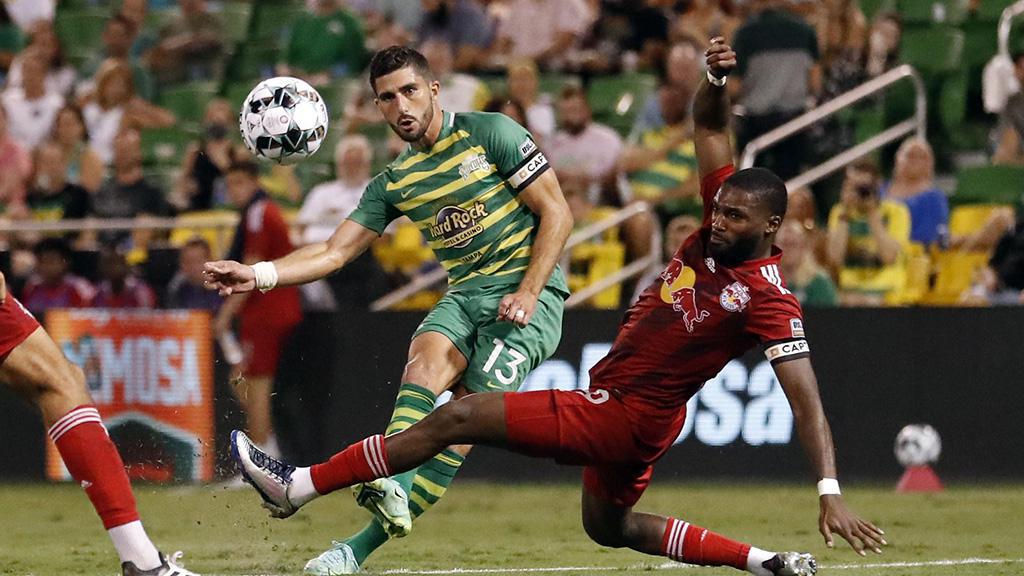 The Tampa Bay Rowdies were kept from all three points by the New York Red Bulls II on Friday night, but still control their destiny in the race for the best record in the Championship. | Photo courtesy Matt May / Tampa Bay Rowdies

The Tampa Bay Rowdies welcomed a season-high 6,882 fans to Al Lang Stadium on Saturday night but despite persistent pressure – especially in the second half – couldn’t find a way to break through for a winner in a 1-1 draw against the New York Red Bulls II on Friday night as visiting goalkeeper AJ Marcucci put on a stellar display with seven saves to keep the hosts at bay.

“I think we’re a little disappointed, a little unsatisfied,” said Rowdies center back Forrest Lasso. “That kind of just shows the standard that we’ve set amongst ourselves. Obviously, we wanted three points. Every time we go out there, we want three points. Fortunately, we did not lose. We got a point out of it. We were talking about it at the end, situations or experiences like this are great learning experiences going into the postseason.”

The point the Rowdies earned did at least keep the side in control of the race to finish with the best record in the Championship at the end of the season, and homefield advantage in the 2021 USL Championship Playoffs. Holding the head-to-head tiebreaker over Phoenix Rising FC in the Pacific Division thanks to their 2-1 win earlier this season when the sides met in Florida, if the Rowdies can win out – starting with Wednesday’s clash with in-state rival Miami FC on home turf – they will get the chance to welcome more crowds to Al Lang Stadium throughout a potential title run.

“It was electric,” said Lasso. “It was incredible, especially in the second half playing towards the home stands. They were wild out there. You could feel the energy, you could hear the songs, you could hear the chants, you could see the green and gold. It really is something. A little disappointing we couldn’t give them three points and the result that they deserved, but we know we’ll see them for many more games in the future.”

The Charlotte Independence took their place in the postseason on Saturday night with another impressive victory, taking both second place in the Atlantic Division and the Southern Derby Cup against the Charleston Battery with a 5-1 win at American Legion Memorial Stadium as Dane Kelly moved to 99 regular season goals for his career in the middle of a standout all-around performance.

The presence of Kelly and other players like Independence veterans Enzo Martinez, Brandon Miller and Hugh Roberts – who on Saturday celebrated his 200th regular season appearance in the league – and new arrivals Irvin Parra and Kevin Riascos gave Charlotte a solid core to build around, but for midfielder Jake Areman the arrival of experienced trio Christian Fuchs, Sylvain Marveaux and Gabriel Obertan during the season has pushed the team – and his own game – to a higher level.

“It's really been an awesome experience to watch these guys and learn from them,” said Areman on Saturday night. “I've been lucky enough to play between Fuchs and Obertan a lot of the time. That has been really cool and they have been very helpful, and I am loving every minute of it. We are getting better and better every day and I think we could be dangerous.”

The Independence were shaping up as a potential No. 2 seed in the Atlantic Division before adding their fourth victory in a row on Saturday night. When the postseason arrives, they could be one of the teams to beat.

After Louisville City FC’s defeat on Saturday night at Indy Eleven, there was an opportunity for Birmingham Legion FC to add to its lead at the top of the Central Division on Sunday against OKC Energy FC that was reflected in the urgency with which the side went after all three points in the second half at Taft Stadium. The visitors held an 8-4 advantage in shots over the 45 minutes, including a pair of good opportunities highlighted by a Bruno Lapa shot that was well saved by Energy FC goalkeeper CJ Cochran, but couldn’t find a breakthrough to put daylight between itself and Louisville City FC.

What’s key now for Birmingham, however, is to maximize its points over the final two games of the season which sees the side host both Sporting Kansas City II and LouCity over the next two weekends. With four points out of six to get to 61 points overall, the side would be guaranteed a second home game in the postseason as it holds the head-to-head tiebreaker over current second-place side in the Atlantic Division the Charlotte Independence thanks to its 2-1 win when the sides met on September 26. If Legion FC falls in either game, though, it could open the door to Louisville moving back into first, and even if it doesn’t a potential road game should the Independence win out to get to 61 points themselves.

“Everyone is fighting for points, playoffs and home field advantage, so we need to stay confident and believe in ourselves because we still can control our own destiny in this division,” said Legion FC defender Ryan James. “Yes, we look at the standings, but ultimately the goal is to win and to be in the best form we can be heading into this last stretch of the season, that’s our main focus.”