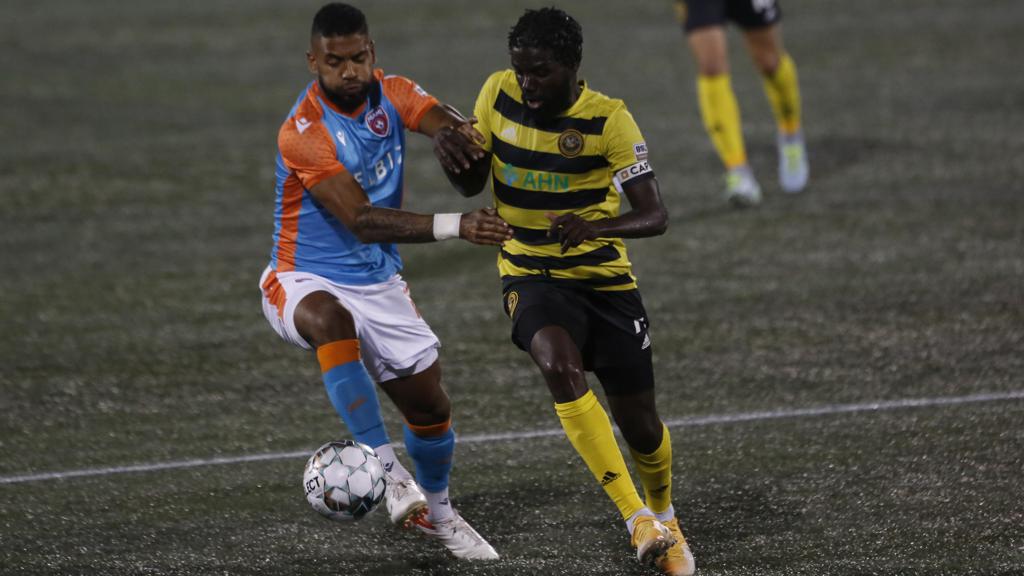 Pittsburgh Riverhounds SC playmaker Kenardo Forbes will try to lead his side to its first win this season against Miami FC on Saturday night in a crucial game for boths sides in the Atlantic Division. | Photo courtesy Orovio Photography / Miami FC

MIAMI – Miami FC plays host to Pittsburgh Riverhounds SC on Saturday night at FIU Stadium with both teams vying for second place in the Championship’s Atlantic Division as Miami enters three points back of the second-placed Hounds with a game in hand, a situation that sees Pittsburgh in need of its first victory against its hosts this season. Kickoff is scheduled for 7:30 p.m. ET.

@TheMiamiFC (14-8-6, 48pts) dropped to fourth place in the Atlantic Division last Sunday afternoon as it fell 3-2 against Loudoun United FC after twice holding the lead at Segra Field. Christiano Francois recorded a goal and assist while new arrival Chris Cortez also found the net, but a red card to defender Paco Craig set off a turnaround in the final 15 minutes that saw the hosts score twice to grab only their fourth win of the season. The dismissal will see Craig suspended for Saturday night’s game against the Hounds, which will mark the first game the former Championship All-League selection will not start for the side this campaign. Francois will be hoping to continue his form against his former club, though, as he has recorded two goals and one assist in three prior games with the Hounds this season. Francois now leads Miami with 10 goals this season overall, while the side is set to welcome back midfielder Speedy Williams after he helped the side claim four points from its three games in World Cup Qualifying over the past two weeks.

@RiverhoundsSC (15-8-6, 51pts) moved up to second place last Sunday night, meanwhile, as it took a 2-0 victory against the Tampa Bay Rowdies at Highmark Stadium that clinched a place in the postseason and also snapped Tampa Bay’s nine-game winning streak. The Hounds got a key second-half penalty save by goalkeeper Danny Vitiello as part of the result as Tommy Williamson and Russell Cicerone found the net to give the Hounds their fourth consecutive postseason berth under Head Coach Bob Lilley. Cicerone has now recorded 15 goals this season to sit in sixth place in the league, while Alex Dixon has notched nine goals and eight assists alongside Cicerone (7 assists) and Kenardo Forbes (6 assists) in an impressive attacking campaign for the Hounds. Pittsburgh has struggled again Miami so far this season, however, including a 3-2 defeat on October 2 at FIU Stadium that saw Forbes score twice but the hosts rally for a 3-2 win that earned Miami the season series and a tiebreaker over the Hounds should they end level on points. With one game fewer remaining, Pittsburgh will be looking to strike first again and make its lead stand this time around.