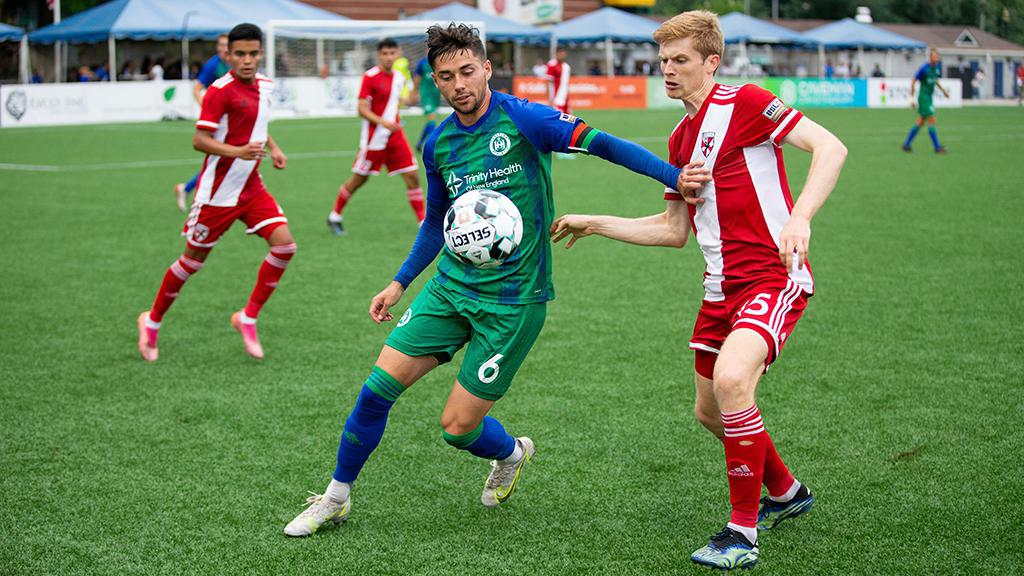 Hartford Athletic's Arthur Rogers and his teammates will try to sweep a home-and-home series with Loudoun United FC back on their home turf at Dillon Stadium on Saturday night after taking victory 3-2 on Wednesday. | Photo courtesy Hartford Athletic

HARTFORD, Conn. – Hartford Athletic and Loudoun United FC will complete their home-and-home series on Saturday night at Dillon Stadium with the hosts looking for a sweep after taking victory when the teams met on Wednesday night at Segra Field with an impressive comeback on the road. Kickoff is scheduled for 7 p.m. ET.

@HFDAthletic (10-14-4, 34pts) rallied from a two-goal deficit to take a 3-2 victory behind a goal and assist from Juan Carlos Obregon Jr. before a late own goal provided the winner for the visitors. While eliminated from postseason contention, Hartford will be looking for more attacking success as Danny Barrera becomes available for selection after serving a one-game suspension in Wednesday game as he looks to add to his 10 assists this season, which are currently tied for the league lead alongside Louisville City FC’s Brian Ownby. Barrera is only three assists behind Pittsburgh Riverhounds SC’s Kenardo Forbes for the Championship’s all-time regular season lead, too, while Obregon has recorded goals in three consecutive games to move to 10 in the regular season.

@LoudounUnitedFC (4-20-3, 15pts) will be hoping it can recapture the attacking form it showed early in midweek, meanwhile, after goals by Jovanny Bolivar and Tyler Gabarra boosted the side as it looked for a second consecutive win. United was without notable standout Ted Ku-DiPietro in its lineup, but still got solid performances elsewhere, including from winger Giovanni Montesdeoca, who notched the assist on Gabarra’s goal. Saturday’s game opens a final stretch of three road games out of its next four where the side will be hoping it can find a second road victory this season in addition to its early win against New Mexico United. Loudoun will be without defender Timmy Mehl on Saturday, however, after his yellow card on Wednesday resulted in a caution accumulation suspension.