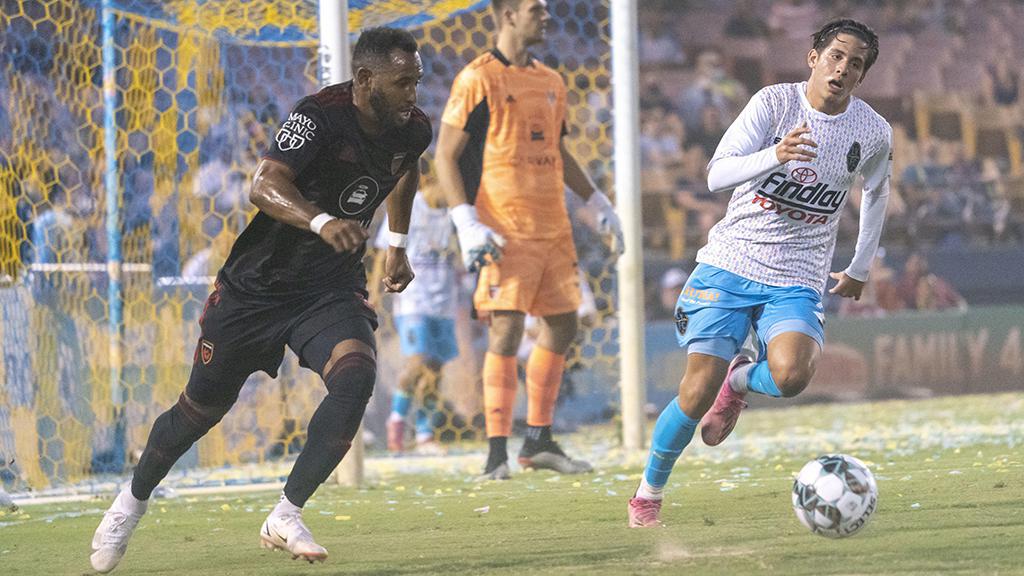 LAS VEGAS – Las Vegas Lights FC plays host to Phoenix Rising FC on Saturday afternoon at Cashman Field hoping to build on its first win since July on Wednesday night but will face a big challenge from a Rising FC side coming off its own road defeat as it looks to remain in contention for the best record in the league. Kickoff is scheduled for 5 p.m. ET.

@LVLightsFC (6-20-3, 21pts) took a 1-0 victory against Tacoma Defiance at Cheney Stadium on Wednesday night as Bruce El Mesmari’s goal inside a minute from the start of the second half stood as the winner at Cheney Stadium. The win was Lights FC’s first since July 27 against Orange County SC and the first goal in the club’s colors for the 19-year-old Mexico youth international. Lights FC will now try to muster a similar performance against Phoenix Rising FC to the one that saw the side earn a 2-2 draw at Cashman Field earlier this season when Mohamed Traore scored with six minutes to go to level for the hosts and Roberto Molina had a goal and assist. Las Vegas’ visits to Phoenix haven’t been as successful, however, but after a six-save shutout in Tacoma there could be a chance for Lights FC goalkeeper Alex Rando to break into the top five for saves in a single season in Championship history on Saturday as he enters with 112 stops on the campaign.

@PHXRisingFC (19-5-5, 62pts) suffered a 1-0 defeat to Orange County SC on Wednesday night at Championship Soccer Stadium as the visitors were unable to recover from an early goal by OCSC’s Ben Mines. The result dropped Phoenix from the inside track to the best record in the Championship this season with its maximum available points total now sitting at 71 compared to the Tampa Bay Rowdies’ 73 should the defending Eastern Conference Title holders win out. Phoenix hasn’t suffered consecutive defeats in a regular season since the final two games of the 2018 season, but one of those came against Lights FC in the lone victory Las Vegas has taken in the series, an outcome Rising FC will be eager to avoid repeating this time around.