Pittsburgh needs to close the show in Miami; Memphis camaraderie has team within reach of playoffs 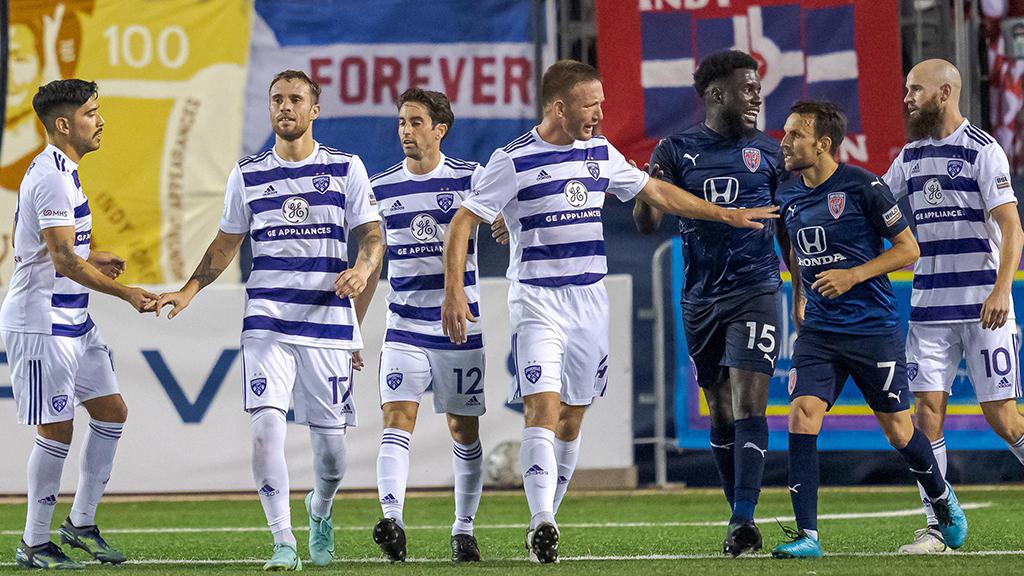 Tempers were raised when Indy Eleven and Louisville City FC squared off last at Michael A. Carroll Stadium, and there's a lot on the line for both clubs in their final meeting this season on Saturday. | Photo courtesy Matt Schlotzhauer / Indy Eleven

The midweek action in the USL Championship shook up the standings in the Central Division, and now there are three teams within reach of clinching their places in the 2021 USL Championship Playoffs this weekend.

There’s plenty more to keep an eye on, though, with rivalry matchups and battles for playoff seeding at stake over the next three nights. Here are five storylines to keep an eye on in the Eastern Conference.

There have been meetings between Indy Eleven and Louisville City FC that have had bigger stakes – 2019’s Eastern Conference Final in the USL Championship Playoffs immediately comes to mind – but between LouCity’s midweek defeat that dropped the side out of first place in the Central Division, the precarious situation that Indy finds itself in regarding making the playoffs at all, and the fact that the Louisville Indianapolis Proximity Association Football Contest is still undecided going into Saturday’s game at Michael A. Carroll Stadium means there’s plenty on the line in the series finale for 2021.

Louisville has held the upper hand on its rival to the north since the Boys in Blue arrived in the Championship, claiming the series all three years in addition to its dramatic victory in the postseason two falls ago. The visitors are coming off a disappointing defeat on the road to Memphis on Wednesday night, though, and are eager to bounce back and put pressure on Birmingham Legion FC, which doesn’t play until Sunday.

“We all know this wasn’t good enough collectively,” said LouCity defender Sean Totsch after the Memphis defeat. “The group didn’t have our best performance tonight. The thing is, with short turnarounds we have the chance to right a wrong.”

For Indy, the route to the playoffs sees it need to win all three of its remaining games, FC Tulsa fail to pick up a point in its final five games, and have OKC Energy FC pick up no more than three points in its final three games – losing twice and then defeating Tulsa on the final weekend of the season. That’s a long-shot in anyone’s book, but for the hosts a chance to claim bragging rights with their first LIPAFC series win and further hurt LouCity’s chances of finishing top of the division should be motivation enough for a big performance.

Pittsburgh Riverhounds SC Head Coach Bob Lilley’s words after his side fell 3-2 against Miami FC at FIU Stadium on October 2 spoke volumes about where his side had succeeded, and yet still come up short against one of its rivals for second place in the Championship’s Atlantic Division.

“I thought overall we played well, but we didn’t close out the game the right way,” said Lilley at the time. “We created a lot of good chances, and we knew they would be dangerous. We certainly need to be able to get it over the line better at the end of the game.”

The Hounds head back to Miami on Saturday night to face the lone divisional opponent it has yet to take victory against this season in what could be the game of the season for both clubs given how tight the battle – which also includes the Charlotte Independence – is for a second-place finish and a home game to open the postseason. In each of their three meetings this season, Pittsburgh has scored first, only for Miami to come back with an answer each time to secure a 1-1 draw and 3-2 win at Highmark Stadium before its win two weeks ago on home turf.

With the Hounds having effectively closed the show against the Tampa Bay Rowdies last Sunday, breaking the Atlantic Division title-winner’s nine-game winning streak in the process, it will be looking for that confidence to carry over and earn it a vital three points toward its goal of postseason soccer at Highmark.

MEMPHIS’ MENTALITY HAS SIDE IN REACH OF PLAYOFFS 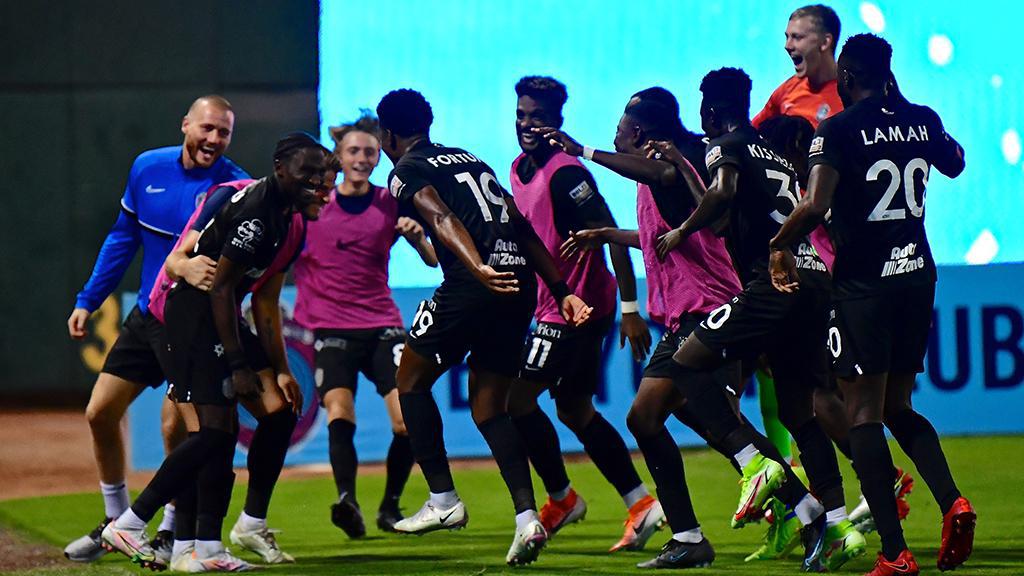 With six victories in their last nine games, including four of six at home, Memphis 901 FC has put itself on the verge of its first playoff trip in club history. | Photo courtesy Eric Glemser / Memphis 901 FC

While Memphis 901 FC still had games in hand on its rivals for a playoff place in the Championship’s Central Division, the six-game winless streak the side endured throughout August and the first game of September put added pressure on the side to deliver in its home-heavy schedule during the second half of the season.

After Wednesday night’s 2-1 victory against then-division leader Louisville City FC at AutoZone Park, the side has come through, with the potential it could clinch a place in the playoff this weekend with three games to spare. Memphis has now won six of its last nine outings overall while going 4-1-1 on its home turf. According to Mark Segbers, who has played a key role as captain and scored the late winner against LouCity on Wednesday, the team’s togetherness has been essential to the success it has found in the final third of the campaign.

“It all goes to the locker room,” said Segbers. “On and off the field, we’re a tight knit group. When you look to your left or to your right, you know the person next to you is working just as hard as you. When you know that, you can focus on your football. Those little things make the rough times easier and makes the good times that much happier. We’re all on the same mission and know that nothing’s going to come easy; we all have the same mentality which helps a lot.”

Victory against Atlanta United 2 on Saturday night coupled with OKC Energy FC failing to take victory against Birmingham Legion FC on Sunday evening would be enough for 901 FC to advance to the playoffs. From being considered a toss-up, and potential dark horse, at the start of the season, 901 FC has produced impressively to take a strong step forward in its third campaign.

The Charleston Battery still have their backs to the wall as they head to face the Charlotte Independence in the final meeting between the sides this season on Saturday night, but in addition to having the incentive of keeping its slim playoff hopes alive the visitors at American Legion Memorial Stadium also have the incentive that a win would clinch the Southern Derby this season and even the overall regular-season series between the historic rivals.

“Any time that Charlotte play Charleston, it’s a rivalry game and we know that, we’re going to go out there to get the [win], to get the points and to get the [Southern Derby] Cup,” said Battery Head Coach Mike Anhaeuser. “We’re ready for everything, it’s a new stadium and we’re excited to be there.”

Saturday night will mark the Battery’s first trip to the Independence’s new home, with Charleston having served as the visitors for Charlotte’s final game at the Sportsplex at Matthews in late June, a game the hosts won 3-0 as former Battery player Dane Kelly found the net for the Independence. Since then Charleston took a 2-0 win at Patriots Point on July 23 as Nicque Daley scored the decisive goal, and while the Independence have added some notable names since then – including former Premier League title winner Christian Fuchs and midfielder Gabriel Obertan – the Battery believe they know what to expect.

“They might have different players, but their system is still the same, the way they play is still the same,” said Battery midfielder Zeiko Lewis. “They’re very good with the ball and if we give them time, they’re going to be dangerous. It should be a very good game.”

Birmingham Legion FC’s 3-1 victory against Austin Bold FC on Wednesday night not only lifted the side into first place in the Championship’s Central Division after Louisville City FC’s defeat at Memphis 901 FC, but also clinched the first home playoff game in the club’s history with Legion FC now clear of both Memphis and FC Tulsa on 56 points with three games to go in the season. While the side has advance to the postseason in each of its first three seasons, this season’s success has marked another level in terms of what Birmingham is building year-on-year.

“I think it’s massive,” said Legion FC defender Jonathan Dean. “Early on, [Legion FC President] Jay [Heaps] and Coach [Tom Soehn] established with the owners that we don’t want to just be in the league and go to playoffs. We want to be hosting playoffs, we want to be the top seed in the playoffs, and that’s what we’re fighting for now is to finish top of our league in a tough conference. I think that says a lot about us and where we are. It’s been a long season, but three games left, and you couldn’t ask for anything else.”

There’s still work to be done for Legion FC to hold onto its one-point edge on LouCity for the division lead, starting with Sunday’s visit to OKC Energy FC. While Birmingham has gone 2-0-1 this season against OKC, including a 2-1 victory at Taft Stadium thanks to a late winner by JJ Williams, Energy FC is in need of victory to keep its playoff hopes alive after going without a win in its last three outings.