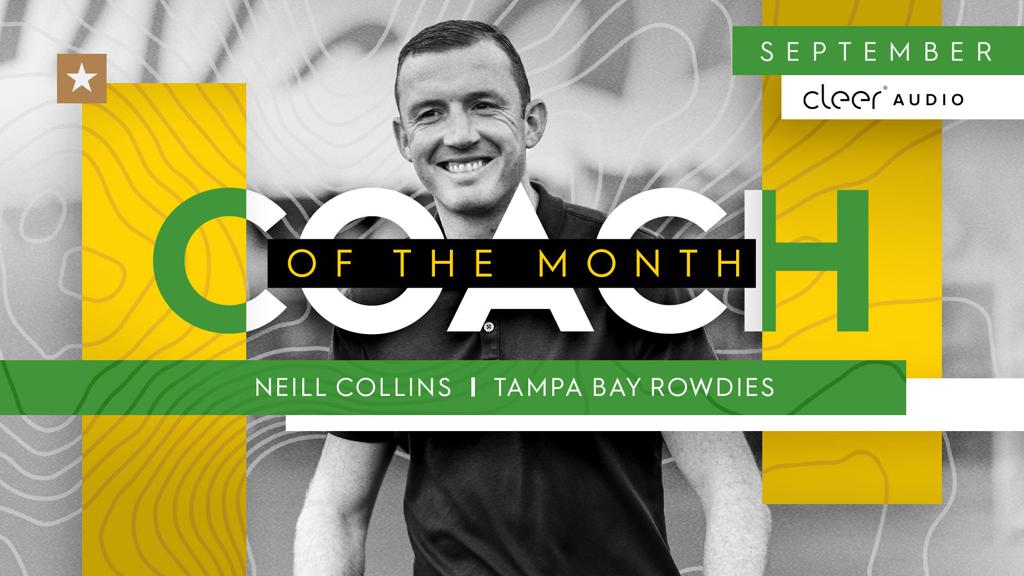 TAMPA, Fla. – The Tampa Bay Rowdies’ Neill Collins has been voted the USL Championship’s Coach of the Month for September presented by Cleer Audio. The award is Collins’ second of the 2021 season as he led his side to a Championship record of 891 consecutive minutes without conceding a goal as Tampa Bay won all five of its outings over the month.

The Rowdies have now clinched the Atlantic Division title in the Championship and continue to vie for the best record in the league overall alongside fellow division leaders Phoenix Rising FC and El Paso Locomotive FC. The accomplishment of recording eight consecutive shutouts – which saw the side pass the previous mark set by Rio Grande Valley FC in 2016 of 759 minutes – was a point of pride for the former center back as his side put together a historic run of performances.

“You take pride in taking clean sheets,” said Collins. “It’s just a byproduct of good performances from top of the field to the back of the field. It all came together. You know you need a break here or there when you go on a run like that, but I thought the players earned the breaks in terms of throwing their bodies in front of things, as they always do, and the strikers working hard to press teams.

“Everything came together well for that period. It was all the hard work the players put in, not just for the season, but over the last 18 months and that consistency in coming together.”

The Rowdies are seven points from clinching homefield advantage in the Eastern Conference going into this week’s games in the Championship with a league-high 20 victories to their credit and a club single-season record 61 points to build on. After going on the road to claim the Eastern Conference Title last season against Louisville City FC, the opportunity to defend that crown – and potentially host the USL Championship Final on November 28 – is now front and center with four games to go in the regular season.

“First you need to qualify for the playoffs and then you need to finish as high as you possibly can,” said Collins. “Then you’re looking at getting as many points. That’s our aim now is to try and have as many home games as we can. We know that when the playoffs start, you need to win the first one. It’s fine having home advantage, but then you’ve got to win to have home advantage. All we can control is winning as many points, starting with Red Bull II on Friday.

“By the end, if we keep taking it one game at a time, winning as many games as we can, then we’ll give ourselves the best chance. We found out last year that wherever you play, you have to win the playoff games.”

Collins received 60 percent of the vote to take the penultimate monthly award of the season. The Charlotte Independence’s Mike Jeffries and Austin Bold FC’s Ryan Thompson finished tied for second on 17 percent apiece with Jeffries’ side posting a 5-1-1 record during the month to move into range of a top-two finish in the Atlantic Division, while Thompson’s first month as a Head Coach saw him lead Bold FC to a 3-1-1 record and the inside track to a postseason berth in the Mountain Division.