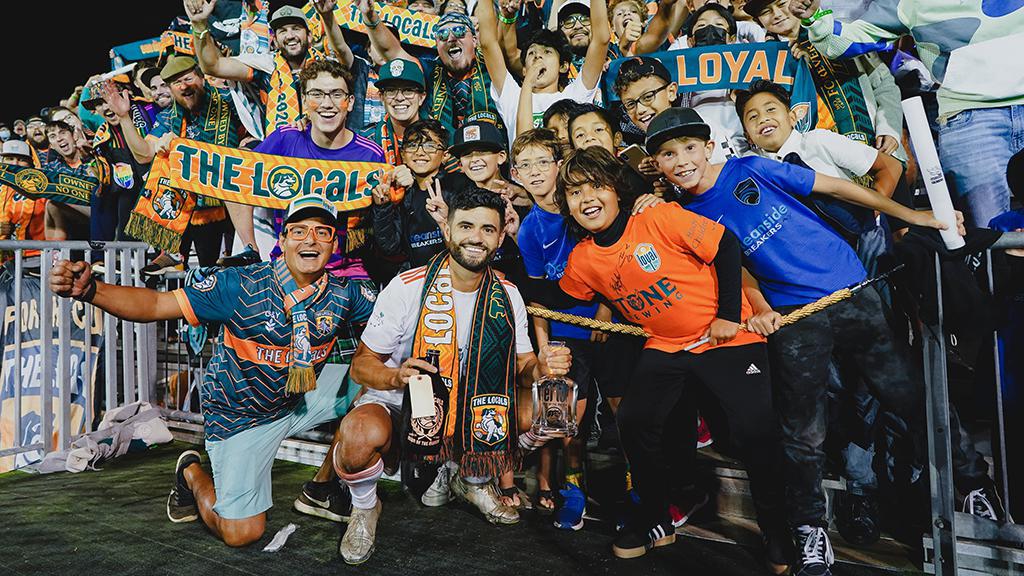 As a second team booked its place in the Western Conference field for the 2021 USL Championship Playoffs, the postseason race overall took some more twists over the past weekend. Here are five storylines that stood out among the action.

It’s generally too simplistic to generalize about patterns, but if you’re looking for a sign as a San Diego Loyal SC fan, it’s been a very good thing this season when local standout Alejandro Guido has found the back of the net. In the five games he’s scored, SD Loyal has taken victory each time among the 14 wins the side has amassed this season in pursuit of its first trip to the playoffs.

The latest came on Saturday night as the side rallied before a raucous crowd at Torero Stadium to take a 2-1 victory against Sacramento Republic FC that could prove a key moment – good and bad – in each club’s season. For San Diego, the win coupled with Orange County SC’s defeat against Tacoma Defiance earlier Saturday night meant a nine-point gap to its competition for second place behind Phoenix Rising FC and a Magic Number of 7 to earn second place and at least one home game in the postseason.

For Guido, the playoffs would be good, but there are still bigger things to accomplish beyond that.

“This is the goal we had but we think we have a team that can do more,” he said. “A championship has always been the objective. We are focused on that. We know that we have eight games left [in the regular season and playoffs] to be able to win it all, but we are focused on the next game. We will remain focused until we get to that eighth game.”

If Guido keeps finding the scoresheet, it could be a good omen for success the rest of the way.

After the helter-skelter nature of the club’s draw against El Paso Locomotive FC in midweek, San Antonio FC was looking for a performance that showed more consistency in both halves on Sunday night against Memphis 901 FC. In producing their best attacking performance of the season in a 4-2 victory, the persistence after twice hitting the woodwork before going behind gave the side a positive boost and the inside track to a second-place finish in the Mountain Division.

“Before the game we really preached on putting two halves together,” said forward Justin Dhillon, who finished the game with a goal and assist. “We thought that was lacking in El Paso. So, for us, even though we went down a goal, we felt that we were still very dominant offensively. We knew if we kept staying resilient and doing the things, we know we are good at it was going to fall our way. I think we put two halves together, so I am proud of the group.”

Maybe the biggest boost in confidence on the night came via a pair of goals for Brazilian forward Nathan Fogaca, who scored the final two goals of the night for the hosts to break a run of more than a month without a goal. Like London buses, goals have typically come in bunches for Fogaca this season – Sunday was his fourth two-goal game of the season out of a team-high 10 goals overall – but if San Antonio can keep him clicking down the stretch a home playoff game to open the playoffs should be within reach. 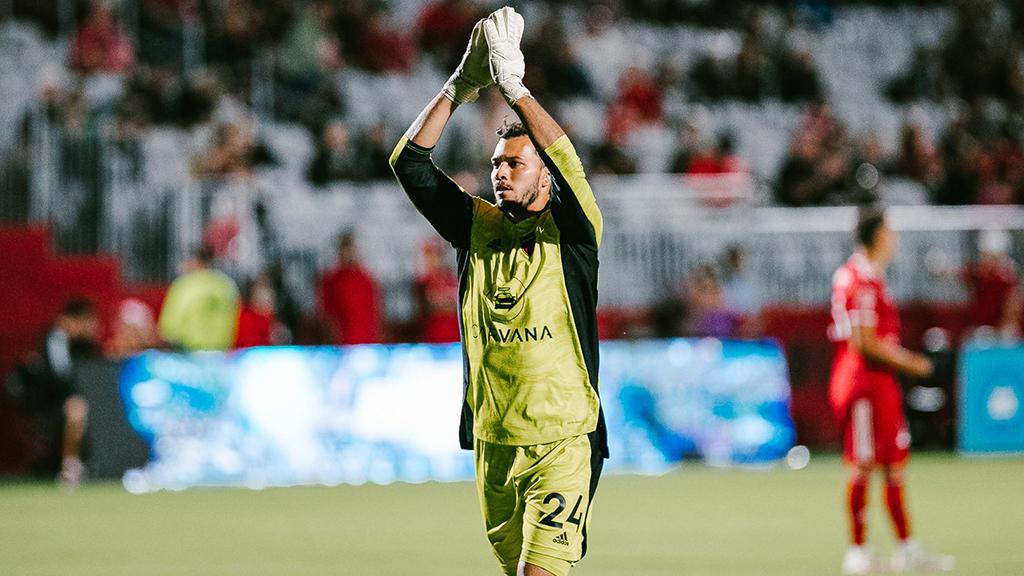 For those that have gotten used to Phoenix Rising FC’s high-flying attacking play over the past four seasons, it’s not usual to have earned consecutive victories by the same 1-0 scoreline. In fact, it’s been more than two years since the last occurrence on Sept. 7 at home to San Antonio FC and Sept. 11 at Las Vegas Lights FC late on in the club’s record-setting 20-game winning streak in 2019.

The biggest reason for those results? Well, that might be goalkeeper Andre Rawls, who produced another strong shutout against an Oakland Roots SC side on Saturday night at Wild Horse Pass. In the past two games, Rawls has made nine saves while keeping out a cumulative Expected Goals mark of 3.0 according to fivethirtyeight.com’s shot-based Expected Goals model. For Rising FC Head Coach Rick Schantz, those performances are symbolic of the consistency Rawls has produced, with the goalkeeper still undefeated this season at 15-0-3 between the sticks in the regular season while posting a 0.89 goals-against average on loan from the Colorado Rapids.

“The best thing about Andre is that he's the same every day,” said Schantz. “He's one of these goalkeepers that is just so consistent in training. In the games, you know exactly what you're going to get from a guy like this. Usually goalkeepers are a bit strange, but Rawlsy is the most normal human being I've ever worked with that's played goalkeeper. I like him a lot, and we're really fortunate to have him here.”

For seven consecutive games, Tacoma Defiance had been trying to find the moment that would snap them out of the funk they had been in for the past month, which had seen the side go from contending for second place to seventh in the Pacific Division standings. Then, less than a minute into the second half of Saturday night’s game, Samuel Adeniran provided one.

The opportunistic interceptions of Orange County SC goalkeeper Abraham Romero’s attempt to throw out to his right flank and lashed finish that put the Defiance ahead seemed cathartic for the hosts. The result was a 4-1 win that saw the Texan striker record the second hat trick in the club’s history after Darwin Jones in 2015 and sent the Defiance back into the middle of the postseason race with four games to go.

“The first goal, it felt like a dam releasing because we have struggled to get goals,” said Defiance Head Coach Wade Webber. “A couple of the goals we scored were just tap ins. We get in close Sam [Adeniran’s] in one-on-one twice and converts two goals. Alec Díaz, close, he finishes. Those are things we haven’t done a lot of. We have scored either magnificent wonder-goals from long range like Sam’s first or we have scored free-kicks, set-pieces, corner-kicks.

“We need to get some tap ins. Sam was a handful tonight, but I have to say, Alec Díaz’s running was tireless, he’s been sort of overlooked for much of the season as the nine I’ve been playing Sam a lot in that role and I think tonight we found a balance of getting them both on the field at the same time, they both scored.”

As El Paso Locomotive FC Head Coach Mark Lowry put it, “it was always going to happen,” but the return of the club for its third consecutive trip to the USL Championship Playoffs on Saturday night after a 2-1 victory against FC Tulsa thanks to a goal and assist by Josue Aaron Gomez and a return to the scoresheet for Luis Solignac still felt good for the favorites to claim the Mountain Division.

“Clinching playoffs feels good,” said Lowry. “We’ve been at the top for a while, so I feel like that was inevitable. It’s good to get back to winning ways. We obviously have a ton of injuries right now. We have a makeshift backline there in front of Logan [Ketterer] and the guys put in a great shift tonight. Getting back to winning ways on the road is important. Tulsa is a really good team; they’re going to make playoffs in their division, obviously. Great performance by everybody. The guys put in a real blue-collar work ethic tonight to get the result.”

What maybe stood out most from the performance was the performance of the “makeshift backline” throughout the second half. With Tulsa having grabbed a goal back in first-half stoppage time, the visitors could have faced a serious test in the second half from an attack that has multiple weapons. Instead, a lone shot shortly after the break by Dario Suarez served as the only official shot Tulsa took in the final 45 minutes as the hosts recorded only four touches inside the penalty area, an indicator of the organization and control El Paso was able to apply to the contest.