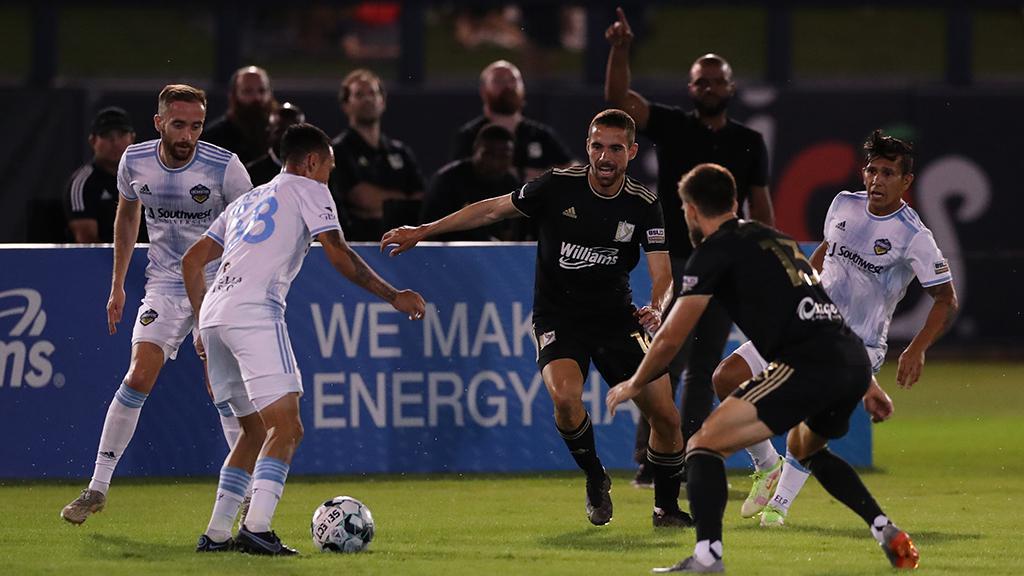 TULSA, Okla. – Josue Aaron Gomez had a goal and assist as El Paso Locomotive FC took a 2-1 victory against FC Tulsa on Saturday night at ONEOK Field to remain on course for the Mountain Division title having secured a place in the 2021 USL Championship Playoffs after division rivals New Mexico United and Rio Grande Valley FC played to a draw earlier in the night.

Coming off a thrilling second-half comeback on Wednesday night, Locomotive grabbed the lead early in Tulsa as the hosts failed to deal with a long throw-in from the left by Macauley King that bounced twice across the face of goal before Gomez pounced at the far post to finish from close range.

Tulsa had a chance to respond in the 12th minute when Avionne Flanagan stole into the six-yard area to get on the end of a deflected cross from the right, only to send the ball over the crossbar, and two minutes later El Paso struck again as Luis Solignac broke his scoring drought with a close-range header of a beautifully delivered cross from the left by Gomez, adding to his initial goal.

The hosts again got back on the front foot quickly, and a good piece of work on the right by Matt Sheldon saw him find space to cut back a pass to Rodrigo da Costa just outside the six-yard area but the Brazilian was leaning back as he tried to control his shot and lifted it over the crossbar.

Da Costa and Suarez almost combined again three minutes into the second half as the Brazilian delivered a free kick from the right channel into the penalty area that Suarez got on the end of for a header to the right corner that El Paso goalkeeper Logan Ketterer kept out with an excellent save. Two minutes later, Solignac appeared to have notched his second of the night but was ruled offside as he completed a tic-tac-toe passing move in the penalty area off a feed by Diego Luna.

From there, the defenses began to gain the upper hand, and a low shot to the right corner by Dylan Mares for the visitors that was saved by Tulsa’s Sean Lewis proved one of few chances that came in the final half-hour. The hosts were unable to successfully break down Locomotive FC’s back line in the final stages, though, allowing El Paso to claim victory as well as their third postseason berth.