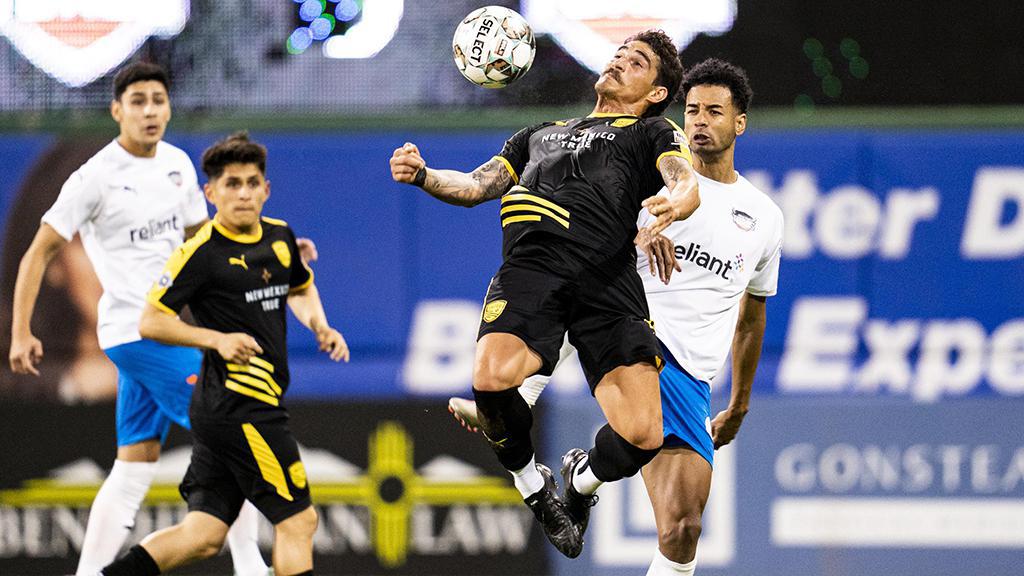 Arguably the biggest game of the season arrives on Saturday evening for New Mexico United and Rio Grande Valley FC, which are both trying to catch Austin Bold FC in the Mountain Division. | Photo courtesy Josh Lane / New Mexico United

The action on Wednesday night the USL Championship’s Western Conference had major ripples across the playoff races in both the Mountain and Pacific Divisions. With a full slate this weekend, here are five storylines we’re keeping an eye on.

NEW MEXICO, TOROS UNDER THE GUN IN REMATCH

After earning only a 2-2 draw against Hartford Athletic on Wednesday night at Isotopes Park, the stakes for New Mexico United in Saturday’s clash with Rio Grande Valley FC on home turf – which were already plenty high – got raised substantially. With both teams now sitting below Austin Bold FC for fourth place in the Mountain Division, and Austin holding a game in hand on each, all three points is a much with the potential the side that comes out on the wrong end of the result could be looking at a four-point deficit to the playoff positions by the end of the weekend.

For New Mexico Head Coach Troy Lesesne, the key for his side is going to be correcting the mistakes that led to a one-goal lead midway through the first half into a one-goal deficit the hosts had to battle back from against Hartford.

“I just told the guys, it's not the result we wanted. We all know that. We wanted three points,” said Lesesne on Wednesday night. “We have to correct that on Saturday in a must-win three-point match, and I know we'll do that. We have to change that energy and that mood of being a little disappointed tonight and put that energy toward Saturday. And I know that our guys are going to do that.”

The Toros, though, have their own major motivations to put right a season that was going smoothly until it reached the midway point, with maybe the biggest the fact that the visitors may feel they came out on the short end when United took a 2-0 win on September 29 in the last meeting between those sides. An seven-save shutout kept RGVFC from points that night, but with the way the attack has been producing chances in recent weeks there could be a big chance for the visitors to turn the tables and put New Mexico’s playoff chances in serious jeopardy.

Oakland Roots SC moved back into fourth place in the Pacific Division standings on Wednesday night after a 2-1 victory against Sacramento Republic FC at Laney Stadium, but the trick now is going to be holding onto that position through a difficult run of four games over the next three weeks. Starting with a visit to Phoenix Rising FC on Saturday night, Roots SC also faces the other two teams in the top three in the Pacific – hosting Orange County SC on October 16 and visiting San Diego Loyal SC on October 24 – while also taking on the Tacoma Defiance in-between those games, a side that is also vying for the final playoff berth in the division.

For Roots SC Head Coach Jordan Ferrell, the key is going to be remaining focused on what’s next, and not what’s beyond that. It’s a trap Ferrell believes his team may have been caught in at the end of its game against Las Vegas Lights FC – with the side potentially looking ahead to its midweek contest with Republic FC early – and one that he is aiming to avoid a repeat of.

“We've got to make sure our focus now is what we need to do to be ready at Phoenix,” said Ferrell on Wednesday night. “We can't look at the table and think we've arrived; there are games on Saturday that can flip the table. These six-point games make a big difference, we have a few more of those in the run-in.

"With San Diego, we've proven we can knock them off. With OC, we still have yet to capitalize on our opportunities. And then Tacoma, with where they are at, we feel these are important six-point games. When it comes times, we'll give them everything that we've got." 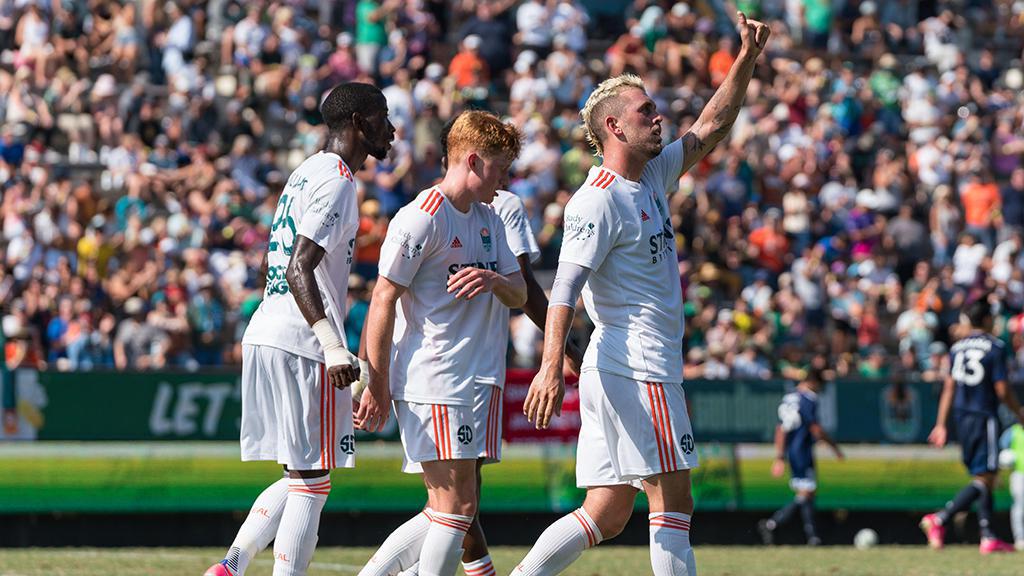 Between its convincing victory against the LA Galaxy II and Orange County SC’s narrow defeat last Saturday night, San Diego Loyal SC gained a potentially decisive edge in the battle for second place in the Pacific Division. As the side prepares to host Sacramento Republic FC on Saturday night at Torero Stadium, the time for watching the standings and the scoreboard with other results has now arrived as Head Coach Landon Donovan and his side prepare for what they expect will be a first postseason trip.

“This is about the time,” Donovan said about looking at the standings. “We talked with the team [last week] and we told them that there’s hopefully 10 games left, six in the regular season and hopefully four more in the playoffs. We want to be better every week. This is the time of year where now the points matter in a real way. I think our guys are focused on giving ourselves a real chance and right now we feel we can step on the field with anyone and compete.”

Saturday night marks the first of two meetings between the sides in the final month of the season, with San Diego having claimed a win and a draw in the prior two encounters this campaign. The clash at Torero will be a major one, with Republic FC’s defeat to Oakland Roots SC on Wednesday night pushing Sacramento further from the playoff positions with five games to go. SD Loyal will need to handle that and maintain its own drive for a successful run-in.

You could have hardly asked for a better first half display than the one San Antonio FC put in on Wednesday night against El Paso Locomotive FC. Not only did the visitors at Southwest University Park score twice through Justin Dhillon and Mathieu Deplagne, it effectively disrupted the hosts – who had entered undefeated in its last 21 home games – to the tune of Locomotive FC only recording three shots, and one on target in the opening 45 minutes.

The second half inverted that narrative as San Antonio’s pressure slowed and allowed Locomotive FC to build the waves of attacking momentum it has become known for this season, and while San Antonio managed to grab a late point thanks to Kortne Ford’s stoppage-time equalizer that’s a lesson SAFC is likely to take with it as it pursues a top-two finish in the Mountain Division.

“In the first half our pressing actions were fantastic,” said SAFC Head Coach Alen Marcina. “We deserved those two goals and could have got an additional one, but the second half we stopped pressing and the game turned in favor of El Paso. There’s a reason they are one of the best teams. They played well the second half, but at the same time I’m proud of the guys who continue to be resilient to go get the equalizer in stoppage time.”

Next up for San Antonio on Sunday night is a visit from Memphis 901 FC and former player Kyle Murphy, who is having a career season in the Bluff City. Maintaining pressing intensity for a full 90 minutes will likely be at the forefront of the plan for the hosts as they look to stay ahead of Colorado Springs Switchbacks FC.

The Tacoma Defiance’s defeat to Austin Bold FC on Wednesday night officially confirmed the path to the postseason was no longer in the control of Head Coach Wade Webber’s side, with the LA Galaxy II now sitting with the highest available points total in the Pacific Division among the four teams battling for fourth place down the stretch.

What’s got to change now if the Defiance are to break a seven-game losing streak on Saturday night at home to Orange County SC and give itself a chance at postseason action for the first time since their inaugural season in 2015 is primarily focused on the attacking third. In the Defiance’s last four home games – starting ironically enough with a 2-1 win against Las Vegas Lights FC – the side has failed to register an Expected Goals mark above 1.00. That shouldn’t come as a big surprise in some ways: the Defiance have been a side that got results on timely goals, not by outscoring its opposition much of the time. That’s indicated by the club sitting 29th in the league currently with 26 goals for the season.

What was happening regularly in the earlier portion of the season, though, was the side was creating multiple big scoring opportunities. Four times this season Tacoma’s Expected Goals mark at home has topped 1.92xG, giving the team chances it needed to succeed. Finding a way to get back to those attacking ideas is the only way the Defiance can get back into a playoff race it was just recently theoretically in control of.