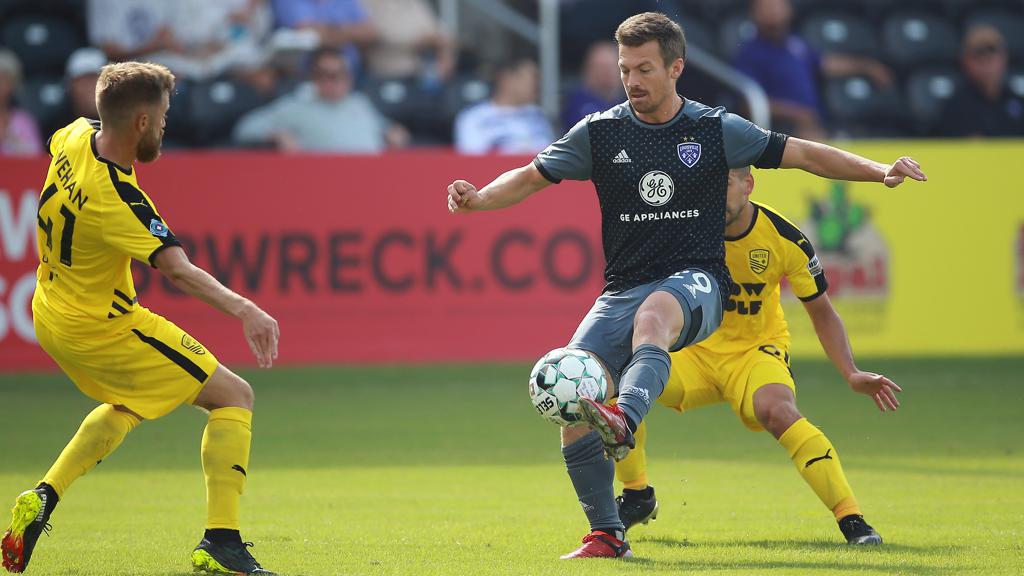 LOUISVILLE, Ky. – Paolo DelPiccolo scored twice in the opening 15 minutes before Louisville City FC held off a strong second-half rally by New Mexico United to take a 3-1 victory at Lynn Family Stadium on Sunday afternoon in the USL on ESPN Game of the Week to clinch a seventh consecutive trip to the USL Championship Playoffs and jump back past Birmingham Legion FC for first place in the Central Division.

The hosts made a customary fast start as just over a minute in Cameron Lancaster fired a shot from 25 yards that deflected wide of the left post. In the eighth minute, however, LouCity took the lead as Jonathan Gomez slid a pass down the left flank for Antoine Hoppenot, who cut back inside onto his right foot near the byline and delivered a low cross into the six-yard area where DelPiccolo finished from close range.

Hoppenot almost added a goal of his own in the 12th minute as Brian Ownby intercepted a pass in the New Mexico half and after drifting wide to the right found Oscar Jimenez breaking into the penalty area. Jimenez’s low cross found Hoppenot for a sliding finish that went just wide of the left post. Two minutes later, though, an almost identical chance saw DelPiccolo notch his second as the same combination by Ownby and Jimenez saw the full back played into the box for a cut-back cross that the LouCity captain clipped home at the near post.

Louisville continued to carry the attacking play as the half progressed, and Lancaster had a curling effort from the left side of the penalty area to the far post well saved by New Mexico’s Alex Tambakis in the 32nd minute. But New Mexico grabbed a lifeline in first-half stoppage time as Daniel Bruce broke into the left side of the penalty area and guided a cut-back back cross into the center where Amando Moreno arrived to halve the deficit moments before the halftime whistle.

New Mexico carried the momentum of its goal into the second half and might have had a second from Moreno in the 65th minute as halftime substitute Josh Suggs clipped a cross from the left that Moreno met centrally on the half-volley but sent over the crossbar. Six minutes later the El Salvador international struck the crossbar as he controlled a half-clearance at the top of the penalty area and shifted to his right for a shot that rattled the woodwork before being smuggled to safety by LouCity’s defense.

LouCity regained control of the game with its first shot of the second half, however, when Jimmy McLaughlin drove forward in the left channel with 15 minutes to go and sent a low shot precisely off the inside of the right post and into the net. That proved enough as the hosts closed out the game, clinched their place in the postseason and regained the lead in the Central Division.

Paolo DelPiccolo, Louisville City FC – LouCity’s captain notched the side’s two early goals and completed 9 of 11 passes in the center of midfield to stake the hosts to a lead it wouldn’t relinquish.