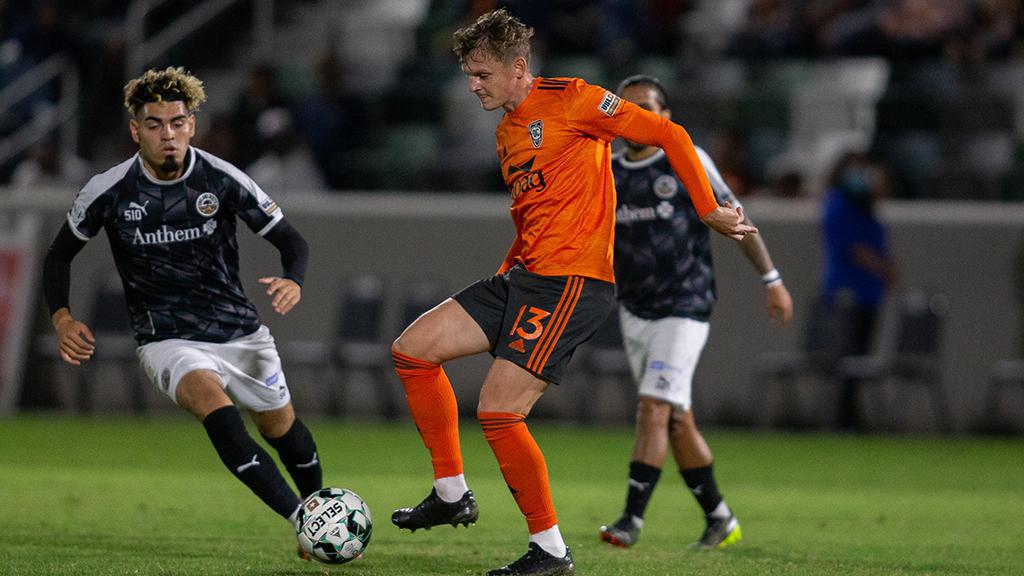 IRVINE, Calif. – Mikko Kuningas scored in second-half stoppage time to lead Orange County SC to a 2-1 victory against Oakland Roots SC on Saturday night at Championship Soccer Stadium as the hosts rallied from a first-half deficit behind a pair of set piece goals to move seven points ahead of Roots SC in the Pacific Division.

Orange County created the first real look at goal in the 16th minute as a threaded pass by Kevin Alston found Sean Okoli in the left side of the penalty area, where he centered for Ronaldo Damus, who sent a turning shot over the crossbar. The visitors took the lead three minutes later, though, as a good passing move brought the ball to Brian Brown, who found Ariel Mbumba in the left side of the penalty area for a low shot to the right corner of the net.

Roots SC had a good chance to double its lead just before the half-hour mark as Memo Diaz played a beautifully weighted pass in behind the Orange County back line for Johnny Rodriguez to break onto, but after the forward rounded OCSC goalkeeper Patrick Rakovsky defender Michael Orozco recovered to block away his finish toward the open goal.

Orozco then had a key impact at the other end of the field as in first-half stoppage time he got on the end of a free kick from the right by Brian Iloski delivered to the back post where the former United States Men’s National Team player headed in from close range. The hosts then went close to taking the lead three minutes into the second half as Iloski won the battle for a pass upfield by Dillon Powers only to shoot tamely from 16 yards allowing Oakland’s Paul Blanchette to save.

Sean Okoli had another opportunity for the hosts in the 53rd minute as the ball fell to him after a collision in the penalty area but the striker struck his finish well over the crossbar as he stretched to finish. Oakland, meanwhile, found the net in the 67th minute on a fine volleyed finish by Quincy Amarikwa, only for the offside flag to be raised to deny the visitors.

As they had in the first half, though, Orange County struck in the first minute of second-half stoppage time for the decisive goal in the game. Off a corner kick from the right, Iloski delivered a deep ball to the left side of the penalty area where Powers turned the ball back toward goal where Kuningas applied the finishing touch from close range to lift the visitors to victory and keep them in the running for second place in the USL Championship’s Pacific Division.

Dillon Powers, Orange County SC - Powers provided the assist on Mikko Kuningas' late winner to cap a fine display that saw him complete 57 of 68 passes and record three key passes overall while winning 10 of 14 duels in the center of midfield.