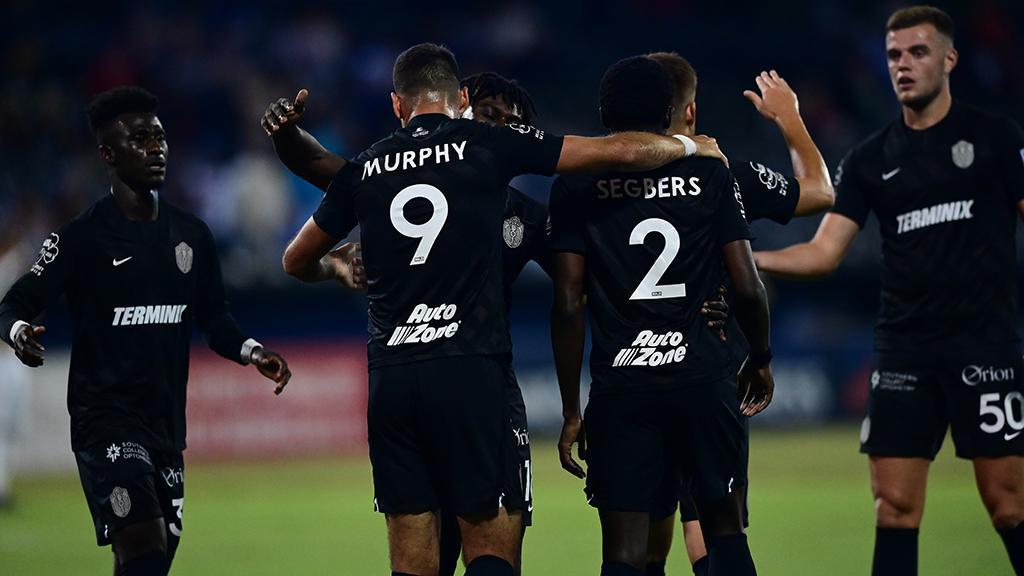 Memphis 901 FC moved into a strong position in the Championship's Central Division on Wednesday with its 1-0 victory against Indy Eleven on Kyle Murphy's 14th goal of the season. | Photo courtesy Memphis 901 FC

Wednesday night’s action in the USL Championship’s Eastern Conference provided more key results for the playoff picture in both the Atlantic and the Central Division and has set up a weekend slate that features more playoff six-pointers as the postseason begins to come into view. Here are five storylines to follow on Saturday and Sunday night.

There have been times this season where Memphis 901 FC left the field cursing its luck, having created enough chances to win but having been unable to finish sharply enough to do so. Outings this month against OKC Energy FC and Miami FC were illustrations of both, which made Wednesday’s 1-0 victory against Indy Eleven at AutoZone Park on a fluke goal by Kyle Murphy – who blocked an attempted clearance by Indy goalkeeper Jordan Farr at the top of the penalty area and saw the ball bounce into the open net for the game’s only goal – at least somewhat gratifying for the side.

“We’ve had a lot of performances on this field in which we’ve played great and walked off with zero points, so it feels good to not play great and come away with three points,” said Memphis Head Coach Ben Pirmann after the game. We fought, we stayed together, and I’m proud of the team. We’ve got nine matches left, and there’s a long way to go, but we took a big step forward tonight.”

901 FC’s victory has put the side in the driver’s seat to claim the fourth and final playoff place in the Central Division. Atlanta United 2’s loss against Birmingham Legion FC on Wednesday saw Memphis jump into fifth place for the moment and holding two games in hand on both fourth-placed OKC Energy FC – alongside which Memphis sits with 31 points – and Indy and three games in hand on Atlanta. That lessens a little of the pressure to get a result on Saturday night at home to Central Division leader Louisville City FC, too, although it’s certain 901 FC will want to keep its two-game winning streak moving to maintain pressure on its playoff rivals.

PACK STEPS UP FOR INDEPENDENCE IN MILLER’S ABSENCE

As big a figure as goalkeeper Brandon Miller has been for the Charlotte Independence both on and off the field, the performance of Austin Pack deputizing for the 2020 Championship All-League selection while Miller recovers from injury has been solid while helping keep the club on course for a return to the postseason. Wednesday night produced a fourth consecutive shutout for the former University of Charlotte standout, and while it required only one save behind a solid defensive performance, Pack’s early denial of a close-range header by Miami FC’s Josh Perez in a 2-0 win at American Legion Memorial Stadium was a pivotal moment in a tightly fought contest.

“Austin made a great save at the beginning of the game that kept it 0-0,” said Independence Head Coach Mike Jeffries. “We’ve said from day one we feel like both guys are incredibly good goalkeepers and really solid. I give credit to Austin for maintaining his preparedness and being ready so that when he got on the field, he was sharp for the first minute. I think it's a testament to his mentality and character.”

The Independence’s victory against Miami opened up a chance at a potential top-two finish for the side, which is now on a four-game winning streak to move seven points back of second-placed Pittsburgh Riverhounds SC in the Atlantic Division with two games in hand. Pack and Charlotte should expect another challenging outing on Sunday evening as they face Birmingham Legion FC, but the manner in which the side is competing currently continues to turn heads around the league. 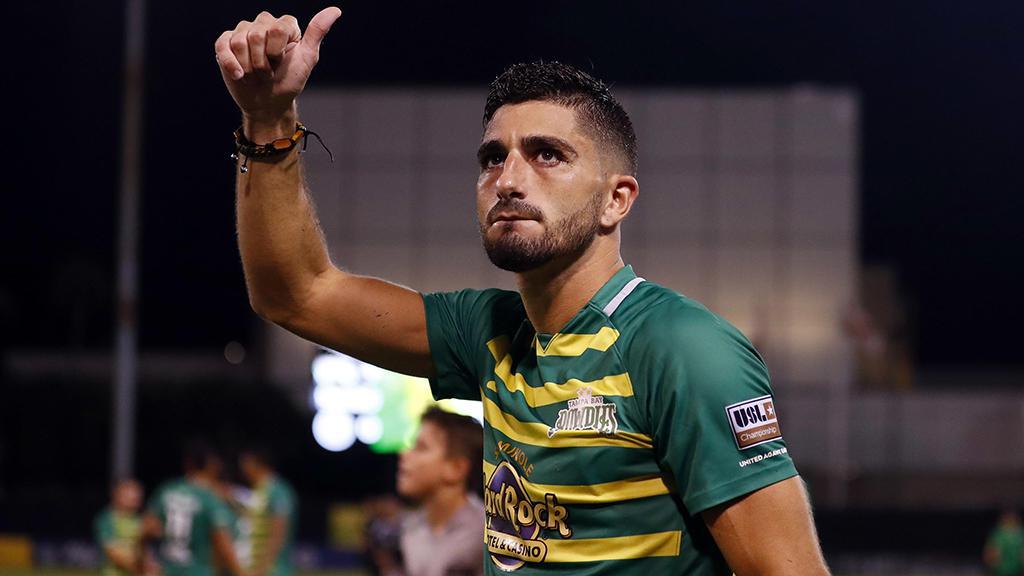 Tampa Bay Rowdies captain Sebastian Guenzatti has recorded five goals in the past three games for the side, but his consistent contributions to other facets of the club's success continue to be prized by Head Coach Neill Collins. | Photo courtesy Matt May

August was an oddity for Tampa Bay Rowdies forward Sebastian Guenzatti, who went through all six of the club’s regular season games without finding the net, the longest scoreless streak he’s experienced since the start of the 2019 season. With five goals in the past three games – including earning the Championship’s Player of the Week award on Tuesday after notching both tallies in the club’s 2-0 win against Atlanta United 2 – he’s now in a tie for second place in the league with 14 goals on the season, but the all-around consistency he’s brought as the Rowdies’ captain went unaltered throughout.

“I did think in Atlanta he had an excellent performance,” said Rowdies Head Coach Neill Collins in his weekly press conference. “His goals were great, but his all-around performance was really good. He held the ball up well, and he really does well against the ball for us. Consistency doesn’t sound exciting as anything else, but when you’re very, very good player and you do that consistently, that’s pretty impressive. I think the fact that his goal record [is what it is], but then on top of that the time he plays, and then the defensive record as well, Seba’s a big part of that as much as the defenders take the plaudits. He’s having a good month, back-to-back braces, but we expect that of him because he does it all the time.”

The Rowdies can clinch a playoff place on Saturday night with a win against Hartford Athletic at Dillon Stadium coupled with a Pittsburgh Riverhounds SC victory against the Charleston Battery. Guenzatti scored the decisive goal when Tampa Bay visited Dillon Stadium on June 26 in their first meeting this season, and has had 16 shots, of which eight have been on target in the three prior meetings overall. As always, he’ll be a player to watch in one of the weekend’s big games.

PRESSURE RAISED FOR BATTERY AHEAD OF PITTSBURGH TRIP

It’s been a remarkable run by the Charleston Battery, who have been the lone side to reach the USL Championship Playoffs in every season of the league’s history, but it might now take something remarkable for that streak to continue as the side heads to face Pittsburgh Riverhounds SC on Saturday night at Highmark Stadium. With a 10-point margin to make up on its Southern Derby rival the Charlotte Independence and nine games to go after Wednesday’s 3-2 defeat to the New York Red Bulls II at Patriots Point, the Battery are now in must-win territory while hoping for the Independence – or Miami FC – to falter down the final six weeks of the season.

Charleston could need to accomplish that without standout playmaker Zeiko Lewis, who was listed as out for Saturday’s game in the Battery’s pregame injury report with an illness after notching his ninth assist of the season against New York. That moved the Bermuda international into a tie for the league lead alongside Hartford Athletic’s Danny Barrera as he continued shine in the Charleston midfield. There will be no quit in the Battery – a decade ago the side needed a win in its final game of the regular season and took a 4-3 win against the Charlotte Eagles to clinch a berth in the 2011 USL Championship Playoffs – but the side knows how important Saturday is.

“Every game is important from here on out, we’ve done well on the road the last few times, so we need to go in there and play like we did at the end of the half, play like we did in the last 30 minutes here,” said Battery Head Coach Mike Anhaeuser on Wednesday night. “We’ve got our work cut out for us and these guys can do it. They’re not going to quit, none of these guys.”

That Indy Eleven came up short against Memphis 901 FC on Wednesday night at AutoZone Park wasn’t the biggest disappointment of the night for the side. That sentiment was reserved for the manner in which the 1-0 loss arrived, in which the Boys in Blue failed to register an official shot in the second half and only forced one save overall in the defensively played game that saw Memphis boost its playoff hopes and leave Indy in seventh place in the Central Division standings.

“In terms of the second half, we had 45 minutes to get a goal or to get the goals to win the game and we didn’t do well enough at all,” said Indy interim Head Coach Max Rogers. “I don’t think we had a shot on goal. You can talk about a mistake and how that affects it, but we just didn’t attack well enough in the second half. Memphis had one sort of chance on the breakaway, but I think they were offside for it. A bit frustrating, but we have to move on quickly and focus on OKC [Energy FC].”

Indy’s game with OKC Energy FC on Sunday evening at Taft Stadium is the first of two between the sides in consecutive outings, with a previously postponed contest from July having been rescheduled to next Wednesday night at the same venue. With 901 FC now sitting in the driver’s seat to claim fourth place in the Central Division, Sunday’s meeting between the two teams that project to be its biggest challenger could end up as one of the biggest of this weekend, with the winner gaining a substantial edge ahead of next week’s rematch.