Legion FC underwhelmed by first half display vs. OKC; Charlotte earns victory, could have top-two chance 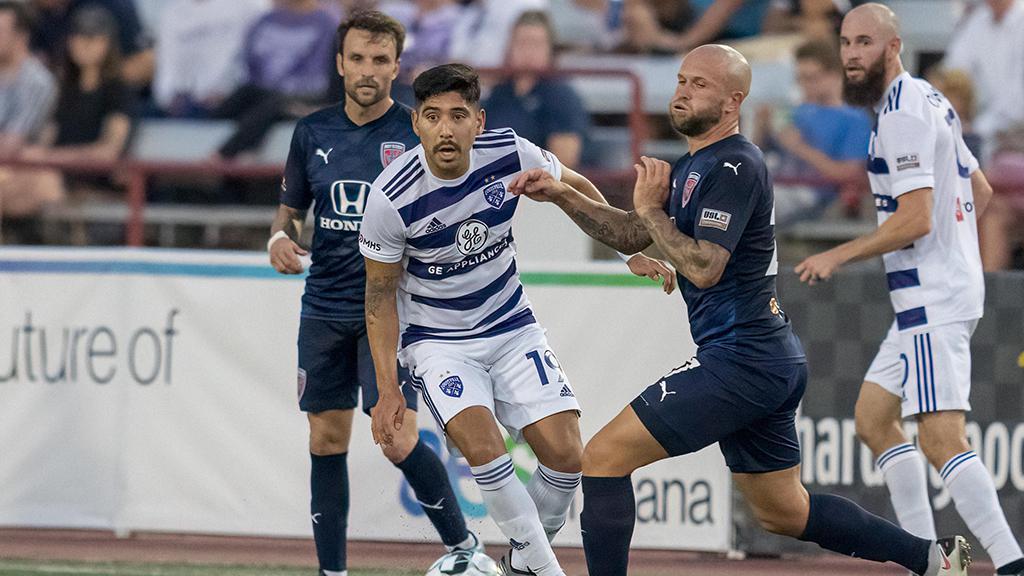 Louisville City FC evened the LIPAFC series this season in a hard-fought 2-0 victory on the road against Indy Eleven on Saturday night at Michael A. Carroll Stadium. | Photo courtesy Matt Schlotzhauer / Indy Eleven

The playoff positions are starting to come into view at the top of both divisions in the Championship’s Eastern Conference after this weekend’s results, but there was much more to absorb from Saturday and Sunday’s games as well. Here are five talking points coming out of Week 22.

Eight of the players that featured as a starter or substitute for Louisville City FC on Saturday night knew what to expect in terms of playing conditions at Indy Eleven’s Michael A. Carroll Stadium, with the likes of Antoine Hoppenot, Paolo DelPiccolo and Sean Totsch being holdovers from the last time the side visited the venue for the Eastern Conference Final of the 2019 USL Championship Playoffs. That played into a testy affair that saw the visitors come out on top thanks to a goal and assist from Hoppenot and a 2-0 win that extended LouCity’s lead at the top of the Central Division while keeping Indy in the middle of a battle for a playoff place in sixth place in the standings.

As he had two years ago with a stoppage-time equalizer that sent the game between the rivals to extra time before Magnus Rasmussen’s goal paved the way to victory and a third Eastern Conference Title, Hoppenot provided the key first-half moment with a goal just before the break on the first shot on goal for the visitors. Then, shortly before the end of his day, he added an assist on Cameron Lancaster’s flicked header that proved the final blow as LouCity’s defense held Indy to only two shots on goal for the game.

“We had a moment beforehand when I got to go to get a drink at the bench,” Hoppenot said, “My calves were about to cramp, so I told Danny. He said, ‘All right, give me four minutes.’ Then I got an assist in those four minutes, Cam gets a goal and we both get subbed off.

“It’s pretty nice. It’s kind of funny. It’s the way you want it to happen.”

It wasn’t so long ago that Birmingham Legion FC had a chance to pass Louisville City FC for first place in the Central Division, but after a 1-1 draw with OKC Energy FC at BBVA Field the second-placed side in the standings is now looking at a six-point margin with eight games remaining after going winless in its last three outings overall.

At home for the first time in September, Birmingham wasn’t sharp in the first half, registering only two shots as it failed to find connections or attacking penetration into the Energy FC attacking third. The hosts recorded only five touches in the OKC penalty area in the first 45 minutes, and while Mikey Lopez’s goal – via an error Energy FC goalkeeper CJ Cochran will be disappointed with – pulled the side level it was unable to break through for a winner despite finding more attacking impetus in the final half-hour.

“I’m just disappointed in the first half,” said Legion FC Head Coach Tom Soehn. “Our soccer wasn’t good enough, and I said that with the broadcast. We were really sloppy, and you can’t work tactics if you can’t hold the ball. Second half I think we got a lot better at it, but you gave up a goal and now they’re holding on and bunkering even more and it’s hard to break teams down like that. Yet, we still had plenty of looks. Disappointed to lose two points at home.”

INDEPENDENCE COME THROUGH, COULD BE TOP TWO THREAT 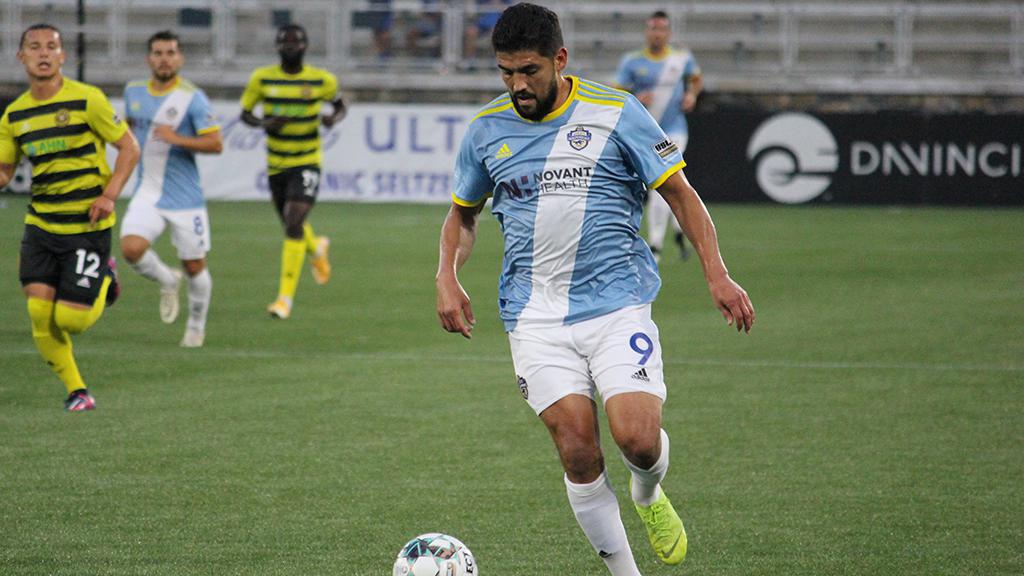 Irvin Parra provided the game-winner for the Charlotte Independence on Saturday night at Memorial Stadium against Pittsburgh Riverhounds SC that moved the side into potential range of a top-two finish in the Atlantic Division. | Photo courtesy Charlotte I

A few weeks ago, the Charlotte Independence were simply focused on earning a place in the USL Championship Playoffs. After Saturday’s 1-0 victory against Pittsburgh Riverhounds SC, however, there could be bigger aspirations at hand for Head Coach Mike Jeffries side, which came through with its third win against the Hounds in four meetings this season thanks to Irvin Parra’s late winner at American Legion Memorial Stadium.

In a contrast to the prior meeting between the teams in Charlotte, there was much more attacking initiative on offer from both sides and the quality provided an entertaining contest that kept both Independence goalkeeper Austin Pack and his Hounds counterpart Danny Vitiello on their toes. The win – combined with a 1-1 draw between Miami FC and the Charleston Battery at FIU Stadium – has now given the Independence a potential chance at a top-two finish in the Atlantic Division if the side can take advantage of its games in hand on both sides. With Charlotte set to host Miami on Wednesday night, Week 23’s action is going to start with a massive game for playoff positioning.

“We had chances in the first half that we did not execute,” said Parra. “We have to finish them, normally if we finish those chances that we have, the clear chances we are all over them. Personally, I did not find it tough. It was just finding the right moment and time for a goal. We were never scared of Pittsburgh. They are just Pittsburgh. We are Charlotte. We are a powerhouse team, and the league should know that. We are coming and we won’t take anything lightly.”

Making history is always enjoyable but doing so when you’ve got friends and family there to share in the accomplishment makes it that much sweeter, and that was the case for Kyle Murphy on Sunday afternoon as his two goals led Memphis 901 FC to a 3-0 victory against the New York Red Bulls II at MSU Soccer Park. A New York native, Murphy had his own supporters’ section in the stands as he reached 13 goals for the season, which also made him the leading scorer in 901 FC’s short history, surpassing Brandon Allen in the club record book.

“Personally, it was awesome to have my friends and family there and to score in front of them,” Murphy said. “To be the club’s leading scorer feels awesome. I always try to do my best, and I’m super happy that I have a great group of guys around me that can help me be at my best. I feel like I can help us win any game that we’re in, and I want to keep that going for the rest of the season.”

Murphy’s goals have been the catalyst for 901 FC’s potential to be a playoff side this season, prospects that took an upward turn with the side’s victory against New York. Memphis is now only three points back of OKC Energy FC for fourth place with three games in hand, and with a showdown against Indy Eleven up next on Wednesday night at AutoZone Park a key stretch of the campaign is now at hand for Head Coach Ben Pirmann’s side.

FC Tulsa was held scoreless for the first time in nine games on Saturday night in a 1-0 defeat to Austin Bold FC at ONEOK Field as the side looked slightly punchless against a staunch visiting defense and midfield which was happy to concede possession and maintain its shape after an outstanding free kick by Fabien Garcia in the 11th minute had put the visitors ahead.

Tulsa held almost three-quarters of possession throughout the contest but were unable to connect well in the final third, resulting in eight of the 10 shots the side took on the night coming from beyond the penalty area. In all, the hosts recorded only 13 touches inside the penalty area as Bold FC held firm for a third consecutive win that further bolstered its playoff credentials, making 32 interceptions and 25 clearances to keep Tulsa at bay.

“In the final third, we weren’t really clicking, we were not dangerous enough,” said Head Coach Michael Nsien. “We had 36 crosses but nothing that turned into anything dangerous. Those are things we have to go back and focus on. We have to be positive that we had a lot of the ball, lots of crosses. How do we turn it into something, turn it into goals, points and opportunities? That is what we have to focus on. There was an opportunity, with Birmingham drawing today, to leapfrog them.”