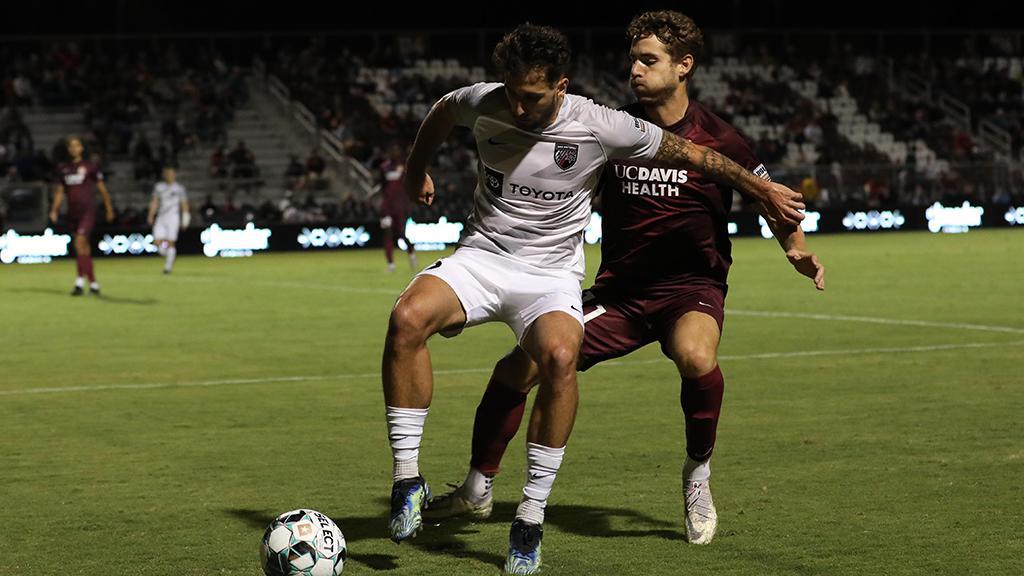 SACRAMENTO, Calif. – Kortne Ford scored the decisive goal late in the second half as San Antonio FC took its first victory in club history on the road against Sacramento Republic FC with a 1-0 win at Heart Health Park on Saturday night to remain in second place in the USL Championship’s Mountain Division.

Republic FC opened on the front foot and in just the third minute a shot by Emil Cuello deflected wide for a corner kick. The hosts continued their early pressure from the set piece as after a half-clearance the ball was recycled by Jordan McCrary on the right and delivered back into the box, where it eventually came to Patrick Weah on the doorstep only for San Antonio goalkeeper Matt Cardone to do enough to keep it out and allow his defense to clear.

Both Kharlton Belmar and Weah then saw chances go wide of the left post as the game approached the midway point of the first half, while in the 24th minute Luis Felipe Fernandes had a header from eight yards off a corner kick blocked on the goal line by Connor Maloney before he cleared to safety.

San Antonio’s first clear chance didn’t arrive until first-half stoppage time, but it almost put the visitors in front as Nathan Fogaca controlled well in the right side of the penalty area and then drifted centrally before playing a backheel for Jose Gallegos that the young standout fired just wide of the left post from the right side of the area. The SAFC Academy product had another chance just past the hour mark that forced a low save by Sacramento goalkeeper Rafael Diaz, while a few minutes later Republic FC’s Cameron Iwasa headed wide of the right post off an angled cross from the right by Jaime Villarreal.

The visitors took the lead with 17 minutes to go, however, as Marcus Epps kept an attacking opportunity alive after a corner kick by Cam Lindley on the left. Epps controlled possession in the penalty area and then wheeled toward the right byline before flipping a cross to the back post where Kortne Ford was on hand to head home from close range.

Sacramento looked for an equalizer late, and Dan Casey sent a header wide of the left post after the visitors failed to clear a free kick from the left with six minutes to go. The game would end with both sides seeing red cards, though, as after a late altercation both Belmar and Maalique Foster were dismissed for Sacramento and Ford was sent off for San Antonio before the visitors saw out what time remained to claim a third consecutive road victory.