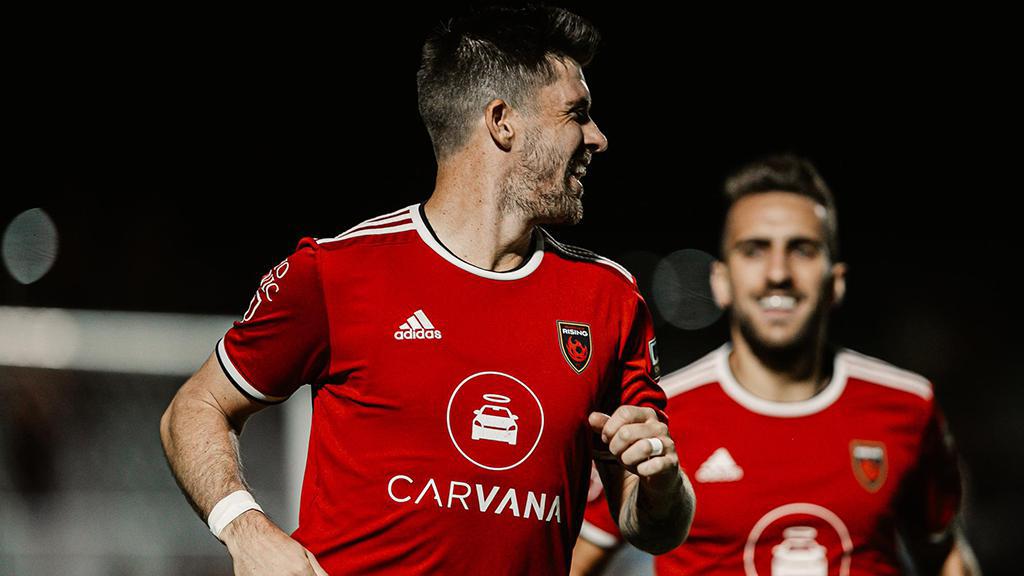 Now sitting fifth in the Championship all-time with 36 regular-season assists, Phoenix Rising FC's Aodhan Quinn has been one of the league's most influential midfielders as he's entered his prime over the past five seasons. | Photo courtesy Ashley Orellan

This past Wednesday, he moved into fifth place in the league’s all-time regular season assists chart, passing Herrera with the 36th helper of his career.

Since the Championship partnered with Opta before the 2017 season, he ranks tied for third in assists (29), fifth in Chances Created (240) and fourth in Big Chances Created (43) across 118 appearances.

But to hear the veteran central midfielder tell it, he’s simply been the beneficiary of good fortune, being surrounded by great players wherever he’s gone over his eight-season career in the league.

“I think I shine when I have really talented guys around me,” Quinn said this week. “I think they make the game easier for me, and I think that’s the best part. That’s what I love about being part of a team. When you get to share success with guys you’ve become close to it’s a lot better than individual awards or individual successes.”

The man has a point.

After all, in his first season in the professional ranks and the current one, he’s played alongside the two players twice voted the Championship’s Most Valuable Player. The talent of current Columbus Crew SC attacking midfielder Kevin Molino – who won the Championship’s biggest individual honor for Orlando City SC in both 2012 and 2014, when Quinn was a rookie out of Akron University – and reigning two-time MVP Solomon Asante put them at the top of the list when asked the best players he’s played alongside. 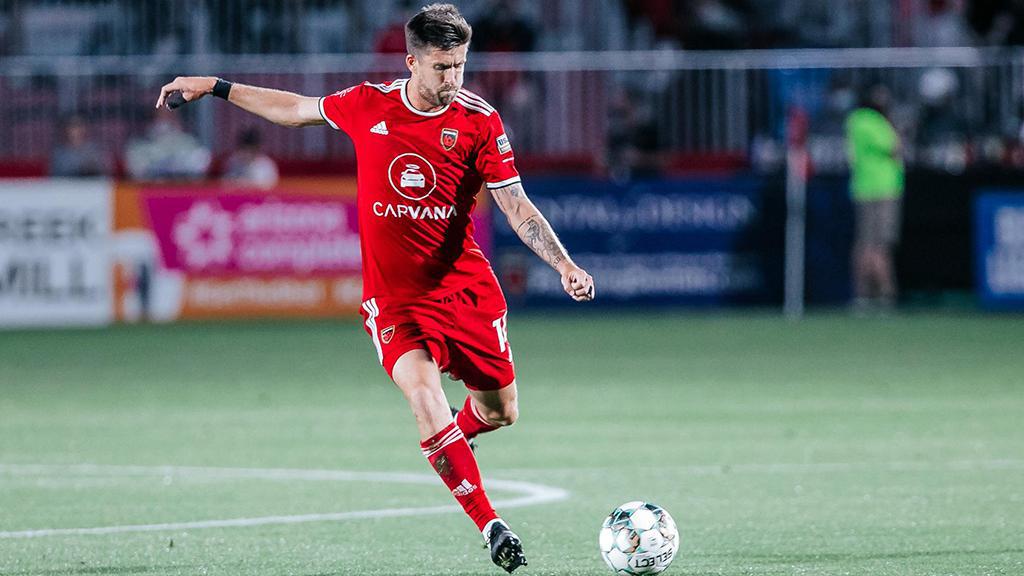 Midfielder Aodhan Quinn has quickly fit into the lineup at Phoenix Rising FC, where he has notched six goals and six assists so far in his first season at the club. | Photo courtesy Ashley Orellana / Phoenix Rising FC

But to say Quinn and his numbers are a product of his surroundings seems inaccurate. Even above-average players with lengthy careers don’t get nominated for Championship MVP themselves, as Quinn did in his first season at Orange County SC in 2018. In the best year of his career so far, he finished with 14 assists – the third-highest assists total in a Championship regular season all-time – along with 11 goals to lead the side to a first-place finish in the Western Conference alongside attacking running mate Thomas Enevoldsen.

“Every single day I try to be the best I can that day and try to be the best player on the field,” he said. “I think that translates to the game, because I train very hard and I try to bring that to the game every Saturday, or if we play Wednesdays, and then I think I have a decent passing range and some technical ability, but I think my biggest strength is my competitiveness.”

The combination of those qualities was what brought him to Phoenix last offseason after three years in Orange County. A California native, Quinn enjoyed his time at Championship Soccer Stadium, but felt it was the right time to move on. After talking with Rising FC Head Coach Rick Schantz, the parallel goals of bringing a USL Championship Title to Phoenix, in the process earning Quinn the title he’s always sought, seemed a perfect fit.

“When it came down to it, I talked to Rick and he really wanted me, it felt good to be wanted,” said Quinn. “The negotiations were pretty easy and simple, we got to what I needed, and I think it was time for me to move on. I did what I did in Orange County, and I needed a new environment to push myself. I keep trying to improve every single day, and I think the move to Phoenix was perfect.”

It's certainly proven so on the field so far. While Moar leads the team with 12 goals after Wednesday night, Quinn has put in solid work himself to move to six goals and six assists on the season. As a sign of how fickle things can be sometimes, five of Quinn’s assists have come in the past four games, the second such four-game assist run of his career after doing the same at Orange County three years ago.

That streak can be looked at as a sign that Phoenix’s attack is running well overall – even in the absence of Asante for four games before his return as a substitute on Wednesday night against Las Vegas – and how strong Rising FC’s attacking corps is that it could bear to be without its best player within a noticeable step down in quality. With the battle for the best record in the league – and the homefield advantage throughout the playoffs – now Rising FC’s primary focus with a 16-point lead over its closest division rival, Quinn and his teammates want to keep their destiny in their hands by reeling off victories.

“We’ve had a lot of success this year in the stadium, so mentally it would be a great thing for us, and it would be a challenge for other teams,” he said. “If we take care of our business now, if we win out, then we get homefield advantage, which is what we’ve been aiming for since the beginning. We don’t really want to put it in El Paso’s hands or Tampa’s hands because we know how good these teams are, and we don’t expect another team to beat them, so we’ve just got to do our part.”

As his most recent club Orange County SC visits Wild Horse Pass on Saturday night, another win to maintain the side’s undefeated home record is the goal, keeping the side on course for the big prize. As someone who has yet to play in a USL Championship Final – being denied three times previously in a Conference Final, twice with Louisville and once with Orange County in addition to other early playoff eliminations – that opportunity, and the chance to claim a winner’s medal, might be the moment where Quinn himself can put himself alongside the players he’s help succeed throughout his career.

“I haven’t been to that final, and I think if I want to consider myself one of the top players to play in this league, I have to play in finals and win finals,” said Quinn. “I won’t be happy just playing in the final, I want to win it, and that’s why I came to Phoenix. I had some near-misses – I remember in Louisville when we lost in penalties to Red Bulls II, who walked in the final and won that easily, so that was a tough one – but it would be huge for me personally, but also for the club. The club hasn’t won the Championship here in Phoenix, and it would be special to be part of that history.”