INSIDE THE NUMBERS – The Tampa Bay Rowdies’ Shutout Streak

On the verge of a league record on Saturday, here’s how the Rowdies have reached this point 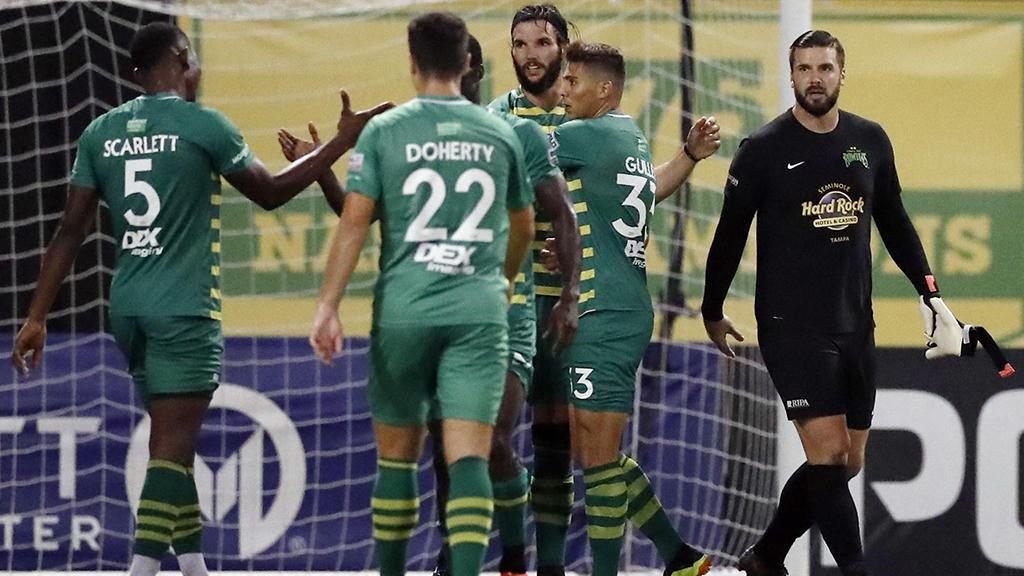 Led by goalkeeper Evan Louro and the backline trio of Jordan Scarlett, Forrest Lasso and Aaron Guillen, the Tampa Bay Rowdies have a chance to set a USL Championship record for the longest shutout streak in league history on Saturday. | Photo courtesy Mat

It’s been five years since Rio Grande Valley FC did what at the time seemed to be insurmountable, recording eight consecutive shutouts in the club’s inaugural season in the USL Championship to set a mark of 759 minutes without conceding a goal.

But if there’s a current club in the Championship you might think would have the ability to top that mark, then the current iteration of the Tampa Bay Rowdies would come to mind.

Far be it that the Rowdies are a defensive team. The side has been one of the most entertaining teams in the Championship for the past two seasons, and this year has gone about the defense of its Eastern Conference Title with aplomb. The Rowdies rank sixth in the league with 38 goals, and that slightly undersells how entertaining they’ve been with the side fourth in the league with a 40.79 Expected Goals mark according to American Soccer Analysis.

But with a back three of Jordan Scarlett, Forrest Lasso and Aaron Guillen being ever-present in the starting lineup ahead of goalkeeper Evan Louro, the quality of the side’s defensive play and buy-in to the ethos of Head Coach Neill Collins – himself a former center back – has been outstanding. That has been particularly true in the past seven games, where the side has not conceded a goal and now sits on a shutout streak of 711 minutes going into Saturday’s game at Atlanta United 2.

Here’s a look at how the Rowdies have reached a potentially record-setting moment.

62 – Over the past seven games, the Rowdies have faced 62 shots overall, an average of 8.86 per game. Over the course of this season, that’s 3.36 shots per game fewer than the league average of 12.12, and even a slight reduction on the Rowdies previous 9.13 shots faced per game average prior to the first game of the current seven-game streak on August 13 against Hartford Athletic.

21 – The Rowdies have totaled 21 blocked shots during the current streak, with two-time Championship Defender of the Year Forrest Lasso leading the group with eight individually. That means one-third of the shots the Rowdies have faced in the past seven games have been repelled by an outfield player, which leads us to…

2 – There have been two games where the Rowdies simply have not allowed a shot on target at all, the first in the game that began this streak on August 13 against Hartford Athletic and then again on August 17 when it played Pittsburgh Riverhounds SC to a 0-0 draw at Highmark Stadium. Tampa Bay has also allowed only one shot on goal in three other games, with the New York Red Bulls II having notched four shots this past Saturday and Loudoun United FC having recorded six on August 23 at Segra Field.

106 – How have the Rowdies managed to keep the shot totals down? They don’t let teams get many clear looks. One of the ways they have accomplished it is by recording 106 clearances – led by Lasso with 34 – of which 50 have been headed – again led by Lasso with 19, more than double any of his teammates – to deny teams that look to deliver into the penalty area. On top of that…

80 - … they’re difficult to play through. The side has recorded 80 interceptions in the past seven games, an average of 11.4 per contest, with central midfielder Laurence Wyke (12) and center back Aaron Guillen (11) leading the ground game for the side. Tampa Bay has also made 409 recoveries and ranks first in the league in duel success rate at 55.6 percent since August 13, making navigating your way up the field a difficult proposition.

0.69 – What does all of that add up to? An Expected Goals Against mark of 0.69xGA per game according to American Soccer Analysis, the lowest per-game average in the league since August 13 and a mark that has cut the Rowdies’ overall average for this season to 0.97xGA per game.

There is all kind of credit to go around here, with Louro making some clutch saves along the way including a penalty kick against Loudoun on August 23 and the team has a whole having raised its level after mistakes led to goals in games prior to this run. Last week Collins said, “the defense has kicked up by about 5 or 10 percent,” and it shows in the numbers the side is now producing.

That combination of ability and execution has brought the side to this moment, and now Tampa Bay can claim its place in USL Championship history on Saturday night against Atlanta United 2.