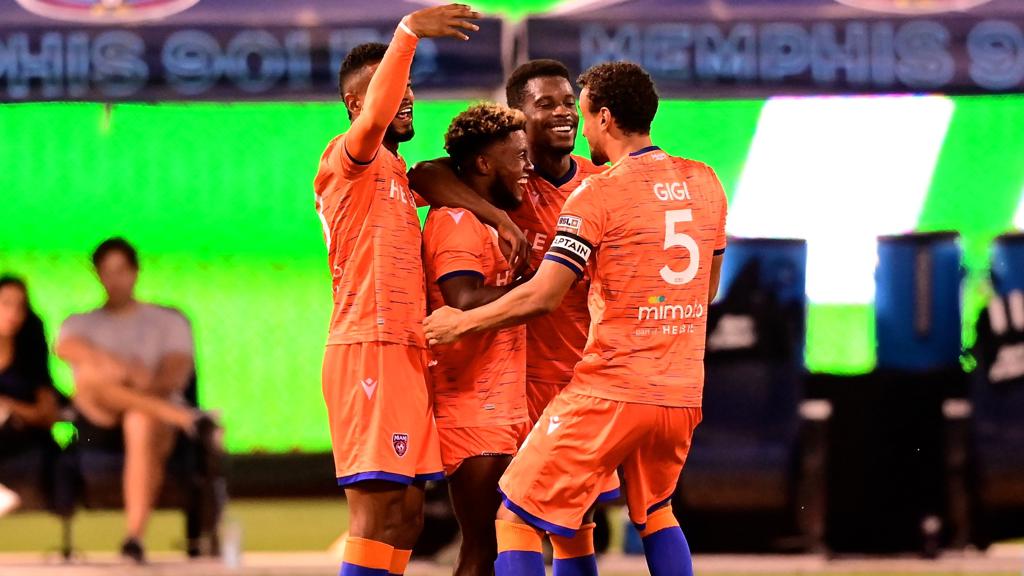 Miami FC had to show defensive resiliance on the road against Memphis 901 FC, but a pair of goals by Christiano Francois ran the side's undefeated streak to eight games. | Photo courtesy Eric Glemser / Memphis 901 FC

There have been times this season where Miami FC has shown how much quality the side possesses in progressing strongly toward a presumptive place in the USL Championship Playoffs for the first time. In the past two weekends, though, the side has shown its resilience as well to continue an undefeated streak that is now at eight games after Saturday night’s 2-0 victory against Memphis 901 FC at AutoZone Park.

With a playoff place of its own to battle for, Memphis produced a sterling attacking display on its home turf, but at every turn either Miami goalkeeper Connor Sparrow or one of his teammates was there to repel them. Sparrow ended the night with a nine-save shutout – tying Phoenix Rising FC’s Andre Rawls for the most saves in a shutout this season – while Miami recorded 10 blocked shots to come away with victory despite being outshot 26-12 as Christiano Francois bagged a pair of goals for the visitors. It’s another positive sign for a side that is now looking like an equal to Atlantic Division rivals the Tampa Bay Rowdies and Pittsburgh Riverhounds SC after its stop-start opening to the season.

“We’re really confident with where we’re at and how we’re playing,” said Sparrow. “Everyone’s feeling good, everyone’s getting along, the locker room is in great shape. Everyone’s really jelling, it’s exciting to see.”

With the way the Tampa Bay Rowdies have been creating chances this season, the frustrations the side had felt in front of goal after some contests was understandable. After Saturday night’s 6-0 victory against the New York Red Bulls II at Al Lang Stadium that saw Yann Ekra, Leo Fernandes and Sebastian Guenzatti each record two goals apiece and both Ekra and Guenzatti notch two assists, it was hard to contain the excitement as the side equaled its highest-scoring performance since joining the Championship in 2017.

“[The players] created the opportunities. They were relentless in the way they went about the game,” said Rowdies Head Coach Neill Collins. “New York’s not had many defeats like that. It’s been one goal losses, the majority of their games. But when the boys play like that, it’s a joy to watch. The players got what they deserved for their effort and their quality.”

You could also take a sense of relief for Guenzatti, whose cold streak in going six games without a goal in August was unprecedented for one of the league’s top scorers over the past three seasons. Now with three goals in the past two games, the Rowdies’ captain now has 38 regular-season goals since the start of the 2019 season, the most of any player in the league. If he maintains that groove, it’s going to keep the Rowdies in with a chance at the best record in the league at the end of the season, and homefield advantage throughout the playoffs. 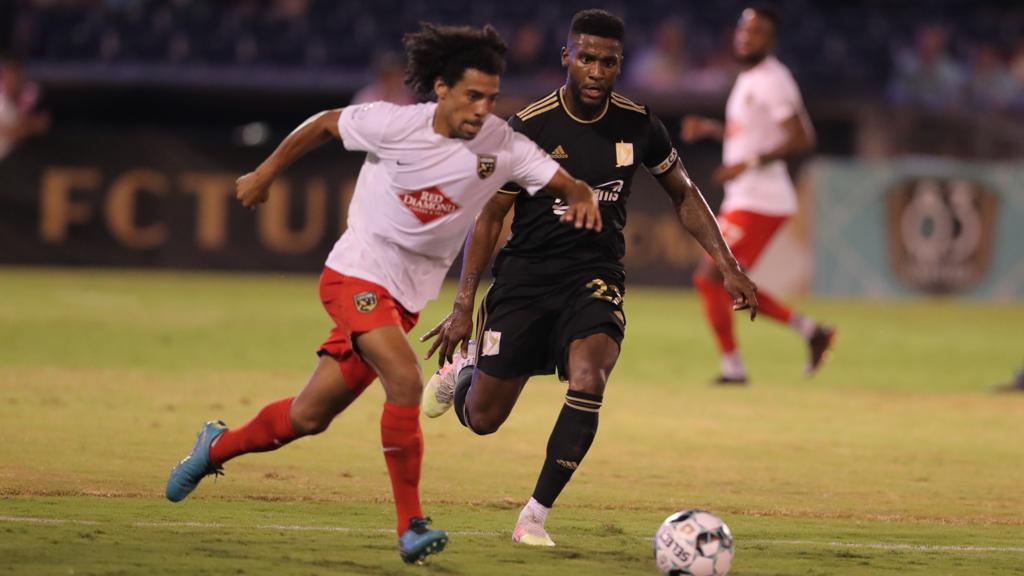 Birmingham Legion FC held onto second place in the Central Division on Saturday night as they battled back for a 1-1 draw on the road against FC Tulsa at ONEOK Field. | Photo courtesy FC Tulsa

The final blow in Birmingham Legion FC’s Week 20 defeat on the road against Memphis 901 FC was devastating, but the overall mood of the side was that in short the overall performance hadn’t been good enough, even if it had been able to take something away from the eventual defeat.

On Saturday night in Tulsa, Legion FC produced the sort of performance that Head Coach Tom Soehn was looking for as a response, and the 1-1 draw at ONEOK Field earned by JJ Williams’ equalizer with 12 minutes to go ensured that Legion FC held onto second place in the Central Division ahead of its hosts with both teams having nine games to play in the regular season. With the likelihood the battle for that spot – and the home playoff game that comes with it – could come down to the wire, a two-point advantage is one Legion FC will take for now.

“I felt that we were hard to play through,” said Soehn. “That threw them off their rhythm, and we were able to win a lot of balls and turn them into chances. Especially early, we had unbelievable chances that we have to put away. That’s the only lesson out of this one, you put those chances away and all of a sudden, the game changes. Overall, I’m still real pleased with the guys. They stuck to our game plan, and we made it real hard for them. Unfortunately, we didn’t get the goal to get us ahead, but they carried out the game plan and that’s progress from the last result at Memphis.”

Maybe the best measure of dominance that Louisville City FC had in Sunday’s game on the road against OKC Energy FC was this: After Energy FC scored in the 25th minute at Taft Stadium, the hosts did not record another official shot until second-half stoppage time. Despite that, however, the visitors were unable to find a winner despite holding the upper hand in possession, territory and shots and were forced to settle for a 1-1 draw that put another dent in the club’s potential to play multiple home games in the postseason.

“It’s obviously frustrating to only get a point,” said LouCity interim Head Coach Danny Cruz. “But I was proud of the effort from the group – the mentality. We limited them to four shots, collectively, with our press, and we obviously changed our shape tonight with the field and what we knew we would see here. I thought we created enough chances to win the game.”

With the structure of the postseason as it stands, Louisville would be guaranteed to host an Eastern Conference Quarterfinal should it remain on top of the Central Division. Beyond that, though, it gets trickier, with overall record coming into play for the Conference Semifinals and beyond. With Pittsburgh Riverhounds SC currently three points ahead of LouCity – with two more games played – Louisville is going to need to find wins consistently in its road-heavy closing stretch to end as one of the top four seeds overall when the postseason begins.

With Gordon Wild leading the way, Indy Eleven kept hammering at the door against Sporting Kansas City II on Saturday night to little avail for three-quarters of the contest. In a game the side really had to have against the Central Division’s last-placed side, though, the persistence Wild and his teammates paid off in a 1-0 victory thanks to a goal 13 minutes from full time that once again revived hopes of a playoff berth in a battle that has seen all four contenders for fourth spot unable to find consistency in results for much of the year.

Wild’s eight shots were tied for the fourth-most this season by an individual in the Championship and the most by one of the Boys in Blue this campaign, putting the side a point behind OKC Energy FC for fourth spot at the end of the weekend’s action. With the next edition of the Louisville Indianapolis Proximity Association Football Contest coming on Saturday followed by three key games against Memphis 901 FC and back-to-back visits to Energy FC – one of them a makeup game from a postponement earlier this season – Indy has its season in its hands between now and the end of the month.

“We’re slowly getting there,” said Indy defender Karl Ouimette, who made his 96th start for the club on Saturday to set a club record for official starts. “We continue to adapt to this field and if we can grow accustomed to it even more it could be a great advantage for us going forward, and I think in the last few games we’ve had some dominating performances. Defensively it’s been good, and tonight offensively we created some chances. So now we just have to take advantage of those chances more to get results, especially at home, because we need the points right now.”