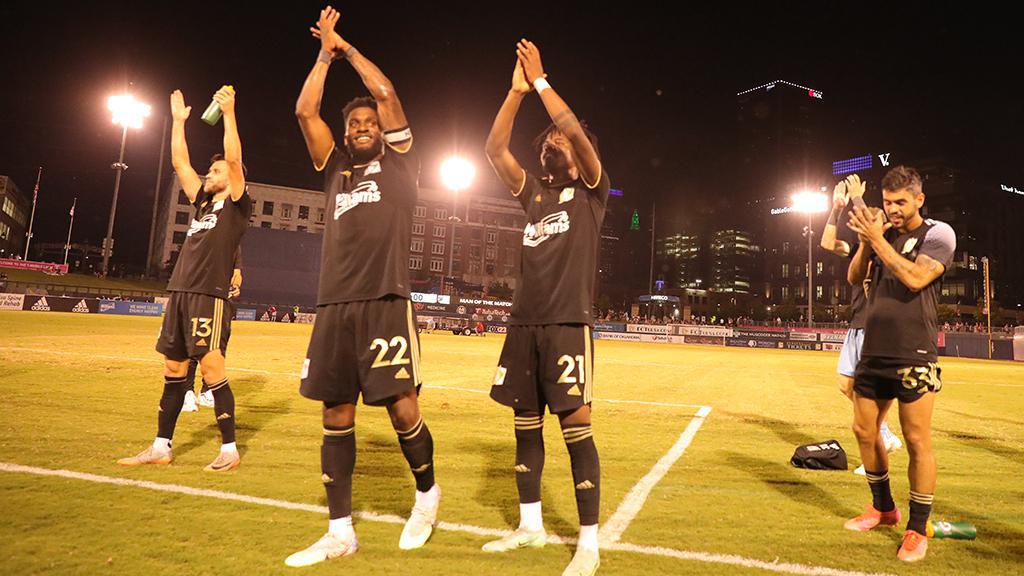 FC Tulsa has notched three game-winning goals in the 88th minute or later in its last seven outings, putting the side within reach of Birmingham Legion FC for second place ahead of their meeting on Saturday at ONEOK Field. | Photo courtesy FC Tulsa

After this week’s action began to bring a place in the USL Championship Playoffs into view for the two division leaders in the Eastern Conference, there’s a lot more to look forward to this weekend with some high-profile matchups that should provide compelling action in both the Atlantic and Central Division. Here are five things to look for on Saturday and Sunday night.

SECOND PLACE IN SIGHT FOR TULSA

It’s been a winding road for FC Tulsa, but after Wednesday night produced a 2-1 victory against Indy Eleven thanks to Dario Suarez’s 89th-minute penalty kick you could feel the elation within the squad as the potential to host the club’s first playoff game came into view. A fifth consecutive victory – tying the longest run in the Championship this season – moved Tulsa within two points of Birmingham Legion FC for second place in the Central Division, and guess who’s coming to ONEOK Field on Saturday night? That’s right, a Legion FC side that Tulsa has defeated in each of the past two meetings between the sides.

“It seemed like we are always on the cusp of changing our fortune, but to rattle off five wins in a row is, for us, unprecedented,” said Tulsa Head Coach Michael Nsien on Wednesday night. “We do it one more time, and we are in the driver’s seat at second place. We are looking for a home playoff game, so we have to celebrate briefly, then get ready to go again for another big one on Saturday. We have to enjoy these moments when they come, it is good for the players to have this experience again.”

Late goals have been a theme for Tulsa during its current run. Suarez’s game-winner was the club’s third in the 88th minute or later over its past seven games and ran the club’s winning streak at ONEOK Field to four games. The first of those three was against Legion FC on August 7 when Marlon provided the winner in a 3-1 victory that was iced in stoppage time by Kembo Kibato. With head-to-head the first tiebreaker in the division standings, a win for Tulsa on Saturday night wouldn’t just continue the side’s impressive recent of form but give it a leg up on Birmingham should the race for a top-two place come down to the wire.

After being stymied in its first visit to Segra Field earlier this season, the Charlotte Independence made sure there wasn’t a repeat performance on Wednesday night in a 5-0 victory against a Loudoun United FC side that wasn’t able to close the floodgates after Houssou Landry’s red card in the first half. Irvin Parra’s brace was followed by a torrent of chances that could have made the final score more lopsided for the visitors if not for an eight-save performance in his professional debut by Loudoun goalkeeper Noah Abrams.

What’s more, Charlotte did that without some of its key figures in the starting lineup. Defender Christian Fuchs got the night off, while fellow Premier League alums Sylvain Marveaux and Gabriel Obertan got 25 minutes off the bench – Obertan notched his first assist for the side in the process – as the likes of Valentin Sabella and Marcello Palomino joined Parra on the scoresheet. That’s good for the Independence, which now has a chance to pad its lead in the race for fourth place in the Atlantic Division with a home game against sixth-placed Hartford Athletic on Saturday night at American Legion Memorial Stadium. With the club also set to host Miami FC and Pittsburgh Riverhounds SC in a three-game homestand, Charlotte has the chance to put pressure on both the Athletic and Charleston Battery if it can build on Wednesday’s success.

“It’s a great result for us and a win that we can definitely take confidence from,” said Independence Head Coach Mike Jeffries on Wednesday. “I thought we were sharp from the beginning of the night and were able to get the first goal. When they were reduced to 10 men that helped us, but I thought we managed the game really well from there and still managed to move the ball and create chances. I think we’ll walk into what we know is going to be a huge game against a very good team on Saturday. It’ll be good to get back home, and we’ll do the best we can physically with the guys to try and get them prepped.”

CAN MEMPHIS BUILD MOMENTUM AGAINST MIAMI? 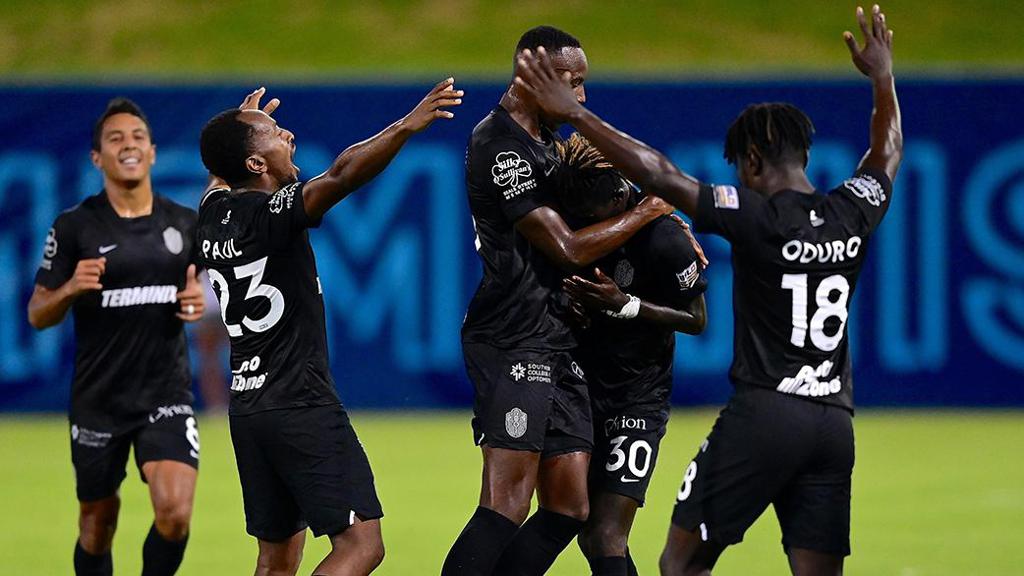 Memphis 901 FC's path to the USL Championship Playoffs has opened up, but on Saturday it faces a tough test against a Miami FC side that is undefeated in seven games. | Photo courtesy Eric Glemser / Memphis 901 FC

It’s been hard to shake the images from last Saturday night’s dramatic victory for Memphis 901 FC against rival Birmingham Legion FC at AutoZone Park, but with Raul Gonzalez’s outstanding winner now in the rear-view mirror the challenge for 901 FC is to build on that success and stake a claim for the fourth spot in the Central Division. With a strong Miami FC side visiting on Saturday night, that’s going to be a challenge, but the path is clearing for Memphis to make a bid for its first postseason berth.

As it stands, 901 FC has the highest potential ceiling for points among the four teams currently separated by four points around the playoff line. Conventional wisdom says it’s better to have points in hand than games in hand, but Memphis might be the exception here with eight of its remaining 12 games coming on home turf. With results like Indy Eleven’s loss to FC Tulsa on Wednesday night or Energy FC’s defeat to Sporting Kansas City II last Saturday falling in the side’s favor, the onus is now on Head Coach Ben Pirmann’s side to step up to the mark.

Miami will offer a serious test, though. Undefeated in its last seven games after an impressive comeback against the Charlotte Independence last Saturday night to earn a 2-2 draw, the visitors are looking a lock for the postseason with 10 games to go in its campaign. What should be heartening for Memphis, though, is the side appears to be finding its attacking form at just the right moment. While its past two outings have seen differing results – the 1-0 defeat to a 10-man Energy FC side on September 1 providing the flipside to last Saturday’s elation – Memphis is creating chances consistently again. If that keeps up, Kyle Murphy and the club’s attacking corps have the ability to take advantage.

The last time Louisville City FC visited OKC Energy FC at Taft Stadium on August 22, it proved one of the more disappointing outings of the season for the side as despite holding the vast majority of possession the incisiveness for which the club has become renowned wasn’t present. Louisville only notched three shots on goal and 11 shots overall to post its lowest single-game Expected Goals mark of the season as the teams played to a 0-0 draw.

A much more characteristic LouCity attacking performance was on display on Tuesday night as the side ran out to a 4-2 victory against Hartford Athletic that saw Cameron Lancaster move into fifth place in the Championship’s regular season scoring list with the 63rd tally of his career before Brian Ownby and Antoine Hoppenot found the net in the second half to see the side home. Comfortably the highest-scoring team in the Eastern Conference this season with 44 goals overall, Louisville will be looking to maintain that sharpness as it heads back to OKC this weekend with a chance to maintain – or potentially add to – its lead at the top of the Central Division.

“I thought the players’ mentality was excellent. I thought the fight was excellent. I was really proud of the second half specifically,” said LouCity interim Head Coach Danny Cruz on Tuesday night. “Ultimately, we’ve talked a lot the last few days about the importance of us being clinical in the final third but also making sure to let the players know there’s no panic from me – only belief.”

ROWDIES TIGHTEN UP, HAVE CHANCE AT HISTORY

When the New York Red Bulls II’s Jake LaCava scored nine minutes into his side’s contest with the Tampa Bay Rowdies on August 6 to put the hosts ahead at MSU Soccer Park, it didn’t immediately seem like it would be the start of something notable for the visitors. After the Rowdies came back to earn a 2-1 victory that night, however, the side has gone on one of the longest shutout streaks in the Championship’s history. That run reached 621 minutes on Tuesday night in the Rowdies’ 1-0 win against the Charleston Battery at Patriots Point, with the side having reeled off six consecutive shutouts on top of the 81 minutes after LaCava’s goal.

With the Red Bulls II set to visit Tampa Bay on Saturday night, the Rowdies could move from their current rank of sixth into second place with another clean sheet, leaving only the league’s all-time record of 759 minutes set by Rio Grande Valley FC in 2016 left to conquer. That mark isn’t on the mind of Rowdies Head Coach Neill Collins, although the fact that his side is approaching it says something is going right for the side defensively right now.

What’s been the most notable difference is the side isn’t giving chances away in the manner it did during the club’s run of four defeats in five games in July. Back then of the eight goals conceded, two came directly from defensive errors. In the six consecutive shutouts the side has put together, the side hasn’t offered those types of chances with no errors leading to an opposition shot, let alone a goal, in the defensive half of the field.

“If you remember, when we were going through our bad spell and losing by the odd goal, I didn’t think there was a whole lot wrong,” said Collins. “A couple individual mistakes, but I think the defense has kicked up by about 5 or 10 percent and we’ve seen the benefits of that.”