TAMPA, Fla. – The USL Championship announced the Team of the Week Presented by Cleer Audio for Week 20 of the 2021 regular season on Tuesday, with San Diego Loyal SC forward Corey Hertzog voted Player of the Week after notching a pair of goals in his side’s 4-2 victory against the LA Galaxy II on Sunday afternoon, moving the veteran forward into a tie for second place in the Championship’s all-time regular season scoring list.

A four-time Championship All-League selection during his career, Hertzog joined SD Loyal last offseason and currently sits tied for second on the club with five goals this season. The veteran notched a pair of goals in Sunday’s victory against Los Dos, which moved the side into second place in the Pacific Division.  Hertzog’s brace also moved him to 72 regular-season goals for his career in the Championship, level with former Charlotte Independence forward Jorge Herrera. Hertzog will have his first chance to take sole possession of second place on Saturday when SD Loyal visits Oakland Roots SC at Laney Stadium.

Hertzog earned 40 percent of the ballot to claim the award. OKC Energy FC’s CJ Cochran finished second on 30 percent after recording 13 saves across a pair of contests during the week, including a seven-save shutout against Memphis 901 FC on Wednesday night. 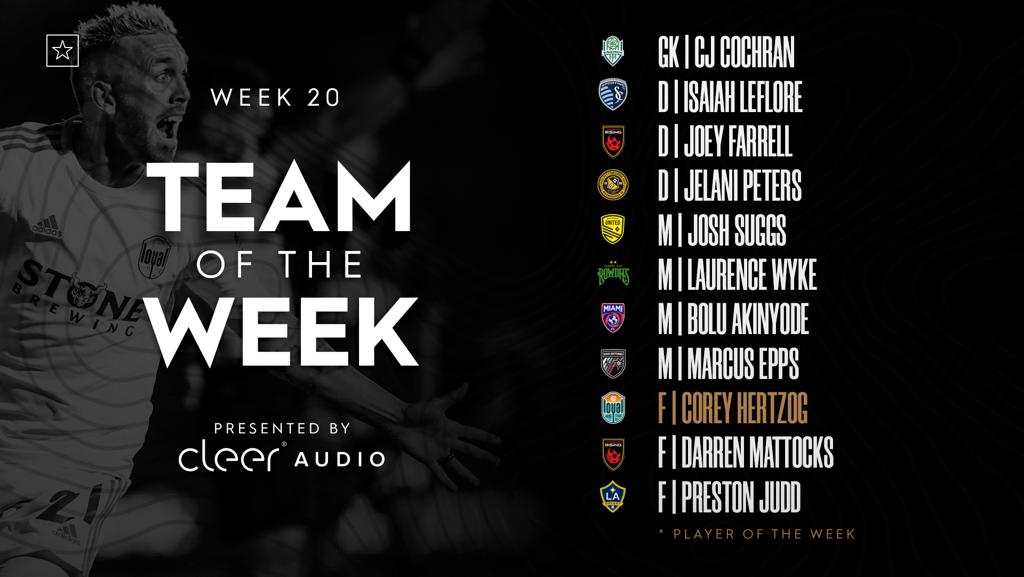 GK – CJ Cochran, OKC Energy FC: CJ Cochran recorded 13 saves across two outings, including a seven-save shutout on Wednesday night against Memphis 901 FC that helped his side to a 1-0 victory despite being reduced to 10 men for more than an hour of action.

D – Jelani Peters, Pittsburgh Riverhounds SC: The Trinidad and Tobago international scored the only goal as the Hounds took a 1-0 victory against the New York Red Bulls II on Wednesday, and over two games recorded seven interceptions, won 8 of 9 tackles and 18 of 24 duels and made 10 clearances.

M – Laurence Wyke, Tampa Bay Rowdies: Laurence Wyke notched a pair of assists in the Rowdies’ 3-0 victory against Oakland Roots SC on Friday night and had four key passes overall while completing 39 of 48 passes and winning 3 of 3 tackles in the center of midfield.

M – Bolu Akinyode, Miami FC: The Nigerian defensive midfielder put in work on Saturday night in his side’s 2-2 draw with the Charlotte Independence, winning 11 of 13 duels and 8 of 9 tackles and recording 16 recoveries defensively while also completing 57 of 63 passes.

F – Corey Hertzog, San Diego Loyal SC: The veteran forward scored twice in SD Loyal’s 4-2 victory against the LA Galaxy II on Sunday to move level with Jorge Herrera for second all-time in the Championship on 72 regular-season goals for his career, while also completing 22 of 36 passes and winning 4 of 6 duels.

F – Darren Mattocks, Phoenix Rising FC: The Jamaican forward scored his first two goals in Rising FC colors in his first start for the club on Sunday afternoon, and also completed 11 of 17 passes as Phoenix handed Tacoma Defiance its first home defeat of the season at Cheney Stadium.