WESTERN TALKING POINTS: Pressure On for Sacramento in Vegas Trip 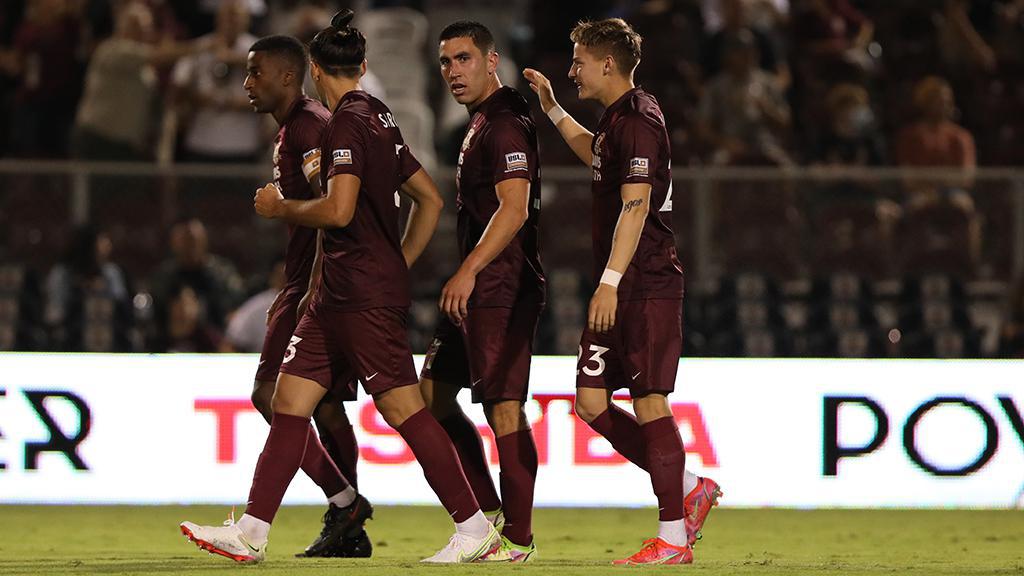 The USL Championship’s Western Conference features some key games this weekend, including a top-two clash in the Pacific Division, after Wednesday and Thursday night’s action brought more clarity to the playoff races in both divisions. Here are five things to watch for over the next three days.

There was plenty of entertainment on offer on Wednesday night in the 3-3 draw between the LA Galaxy II and Sacramento Republic FC, which ended in dramatic fashion as Los Dos first took the lead from the penalty spot thanks to Jorge Hernandez’s Panenka in the 85th minute before Cameron Iwasa leveled with his second spot kick of the night with a minute to go, but the combination of that result and Thursday’s 2-1 victory by Tacoma Defiance at home to Las Vegas Lights FC only added to the pressure on both sides going into Sunday’s action.

While the side pointed to positives to take from the game, a lost two-goal lead that Republic FC established in the opening half-hour could prove critical to the side’s bid to reach the postseason for an eighth consecutive campaign. Sacramento now faces the prospect of making up a seven-point gap to the trio of Tacoma, San Diego Loyal SC and Orange County SC – all of which now sit on 30 points – with 12 games to go. That means the side’s visit to Las Vegas to face Lights FC at Cashman Field is looking like a must-win.

“We're a little disappointed that we didn't get the three points tonight because we want to be pushing ourselves up the table,” said Sacramento’s Duke Lacroix, who notched his first goal for the club against LA. “At a certain point, draws are good and staying on the field is all well and good, but we want to put pressure on the teams in front of us. That's the plan this weekend, we're going to go into Vegas with a mentality that we're going to walk away with three points.”

As impressive as El Paso Locomotive FC has been in late in games throughout this season, it made it all the more surprising that the side was stung by a late winner last Saturday night as it fell to San Antonio FC at Toyota Field for just its second defeat of the 2021 campaign. As the side heads to Orange County SC on Friday night for an interdivision matchup, putting the result and performance in perspective has been the focus for Locomotive FC Head Coach Mark Lowry.

“I mean, it’s 33 games and two losses. That’s where we’re at over the last 33 games [dating back to the 2020 season], which is pretty good,” Lowry told KTSM.com’s Andy Morgan. “We have to remind ourselves how we got to that point as a team, keep doing that and we can’t focus on the playoffs. We just have to focus on the next game. The next game is Orange County, and we want three points. We want to keep that gap between us and second place in the Mountain Division.”

El Paso last made the trip to Orange County in the opening weekend of the 2020 season where it played to a 0-0 draw with the hosts at Championship Soccer Stadium. OCSC has struggled at home this campaign with only two wins in nine games, but after taking four points from its first two outings under interim Head Coach Richard Chaplow away from home, the hosts will be hoping to turn that form around in a matchup that as the standings sit going in would be a preview of a Western Conference Quarterfinal in November’s USL Championship Playoffs. 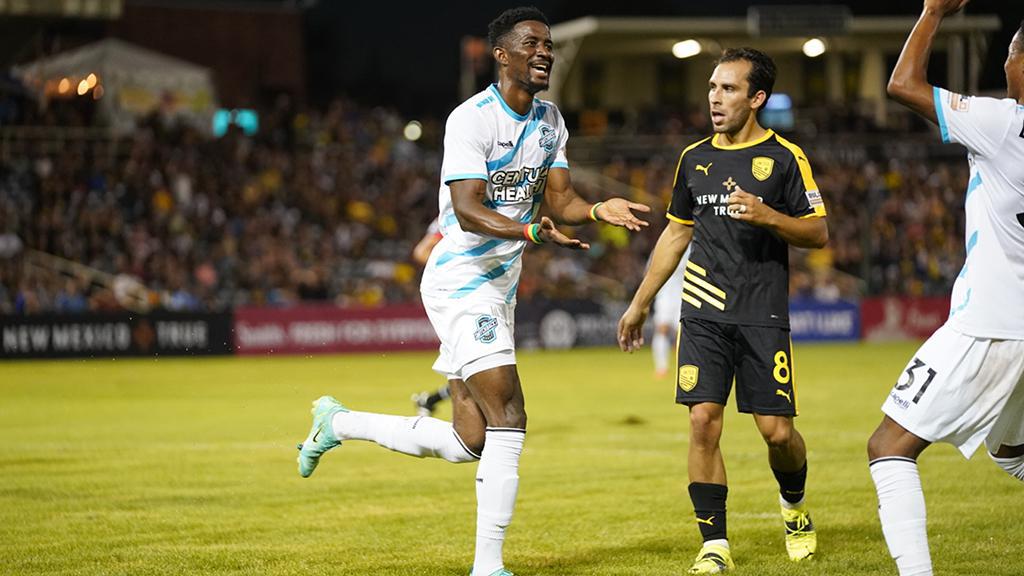 Colorado Springs Switchbacks FC and New Mexico United have gone in different directions since they last met on July 9 – Colorado Springs is undefeated in its last five games, which has moved the side into second place in the Mountain Division, while New Mexico has won only once since, and is winless in its last seven games to sit in sixth place – but there remains a chip on the Switchbacks’ shoulder after the 3-1 defeat they suffered in their last visit to Isotopes Park ahead of Saturday’s final meeting between the sides this season.

“We owe New Mexico,” said Switchbacks defender Matt Mahoney this week. “They’ve beaten us now two times, and we got one on them as well, but there’s a sour taste from last time at their place where it was 1-1 late in the game and we ended up losing 3-1. We need to get on top of the game early and if we can play the way that we know we can – and not concede goals – we’ll get chances to come away with a win. The first 15 minutes is key for us; that’s the one weakness we’ve had this season.”

The Switchbacks’ success this season has been powered by the most prolific attack in the Championship, with the side having scored 12 goals in the past three games as Hadji Barry has moved to 20 goals in 20 appearances to lead the race for the Golden Boot. Barry has been a thorn in the side for New Mexico this season, too, with four of his goals coming against New Mexico in their three prior meetings. Should Colorado Springs gain the revenge it’s looking for, it would be another big step toward the club’s first postseason berth since the 2016 season.

Tacoma Defiance won’t have great memories of the last time Phoenix Rising FC visited Cheney Stadium. Back in 2019, the hosts held a one-goal lead with 10 minutes to go against a Rising FC side that was at that point 15 games into its historic winning streak that season, only for Phoenix to rattle off three goals in the span of four minutes to turn the game around and claim a 4-2 victory.

This year’s Tacoma side is proving very different to prior editions, though. After Thursday’s 2-1 victory against Las Vegas Lights FC that saw Samuel Adeniran score an outstanding late winner with four minutes to go the side remains undefeated at Cheney Stadium this season and in second place to Phoenix in the Pacific Division going into the weekend. That position, and the challenge that Phoenix poses, is the sort of test that Defiance Head Coach Wade Webber is eager for.

“[What] we’ve wanted, from the minute this S2/Tacoma Defiance experience began, was to play meaningful games late in the season because that matters to a young player,” said Webber on Thursday night. “A game where your performance can influence the result, which influences perhaps our ability to play another day. So, for a 16-year-old like Reed [Baker-Whiting], Obed [Vargas] who came on and I thought did really well.

“How they play matters, and that’s the life of a professional, as much as everyone wants to be ‘let’s have fun,’ everyone wants to enjoy the game. It’s a job, and if you’re going to stay employed, you have to be prepared to deal with different environments and hostility and frustration and overcome and find a way to get something done. I’m excited and proud not only of what the team has done but the staff, the staff is exceptional.”

Rio Grande Valley FC’s Elvis Amoh and Christian Sorto might not have expected it when they signed this offseason, but this season’s interconference play in the USL Championship will see the duo face their former club Loudoun United FC on Saturday night at H-E-B Park as the hosts look to get their season back on track after a difficult August.

The Toros are winless in their last five games, having suffered four defeats in that span, to slide to fourth place in the Mountain Division after last Sunday’s 2-1 defeat to OKC Energy FC. They’ll try to turn that around against United, which is sitting in eighth place in the Atlantic Division, and both Amoh and Sorto could have a key role to play. Amoh leads RGVFC with seven goals this season in 12 appearances, while Sorto has notched three goals and four assists for his new club after each spent the 2020 campaign in Virginia.

With Rio Grande Valley looking for its first postseason berth since its inaugural season in 2016, the side will be eager to start September on the right foot and get its campaign back on track.