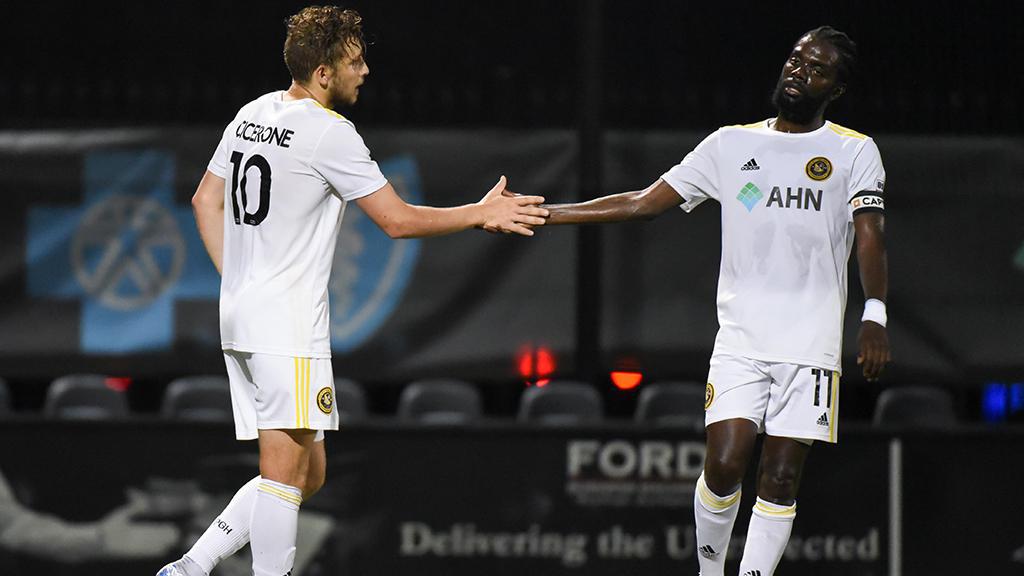 After three tightly-fought games on Wednesday night, this weekend’s action in the USL Championship’s Eastern Conference has a collection of games that will continue to shape the races for first place in the Atlantic and Central Divisions, and the playoff battles in both as well. Here are five things to watch for.

HOUNDS HEAD TO TEXAS TO WRAP UP 30-DAY CHALLENGE

The compressed nature of the Championship’s regular season schedule this season has meant stretches for every club where games arrive in quick succession. For Pittsburgh Riverhounds SC, that has been the case over the past month, with Saturday’s visit to San Antonio FC at Toyota Field the last in a run of eight games in 30 days that began on August 6 with the club’s 3-2 victory against the Charleston Battery.

Wednesday’s 1-0 win was notable, however, in that – barring any future postponements – it was the last midweek game the Hounds face on their schedule this season. The game wasn’t the prettiest – Jelani Peters’ goal in the 32nd minute to decide the contest was Pittsburgh’s lone shot on goal for the game as the sides combined for just 11 shots overall – but with the side sitting with a 4-2-1 record with a game to go the points sent the side back on top of the Atlantic Division and kept pressure on the Tampa Bay Rowdies to match them as the Florida side faces 12 games over the final two months of the season.

“Saturday will be our eighth game in less than a month,” said Hounds Head Coach Bob Lilley. “We’ve had a lot of guys out with injuries, like Mekeil Williams and Jalen Robinson. We just got Jordan Dover back today, and Albert Dikwa and Josh Gatt are still out. It’s been tough with a limited roster, but we’re competing, and other guys are stepping up. You’re not going to win consistently with this type of performance, but I’m proud they made that goal stand up.”

San Antonio is embarking on a similar run of games this month, with Saturday the second of seven games in the span of 25 days after its midweek victory against Real Monarchs SLC. With both the Hounds and SAFC entering on three-game winning streaks, Pittsburgh will go to the well one last time to try and find a result in Texas.

TULSA AIMING TO SHOW IT BELONGS IN ELITE

FC Tulsa’s three-game winning streak over the past two weeks has pulled it into a middle ground in the Central Division above the fray of the battle for a playoff position but not yet into contention for a top-two finish in the standings with second-placed Birmingham Legion FC sitting eight points ahead while having played one game more so far this season.

Having taken back-to-back victories against Birmingham in August, however, Tulsa Head Coach Michael Nsien is looking at Friday night’s visit to first-placed Louisville City FC as a chance for the side to make a statement that it should be considered among the top teams in the Eastern Conference, and the league overall.

“With us beating Birmingham Legion twice and now an opportunity against Louisville, I think if we go and beat them, despite the points but in form, we are the cream of the crop right now,” said Nsien. “That’s what we want to be. We want to go and beat them at home and then say, ‘we beat the top two teams back-to-back away from home and we consider ourselves one of the elites.’”

If Tulsa is to accomplish that, it’s going to have to first weather the early pressure LouCity is known for, especially on its home turf, and find a way to curtail the productivity of Louisville forward Cameron Lancaster. The English striker has recorded five goals in three games this season against Tulsa, scoring in each of the three prior meetings this season, which account for almost half his 11 goals so far this campaign. 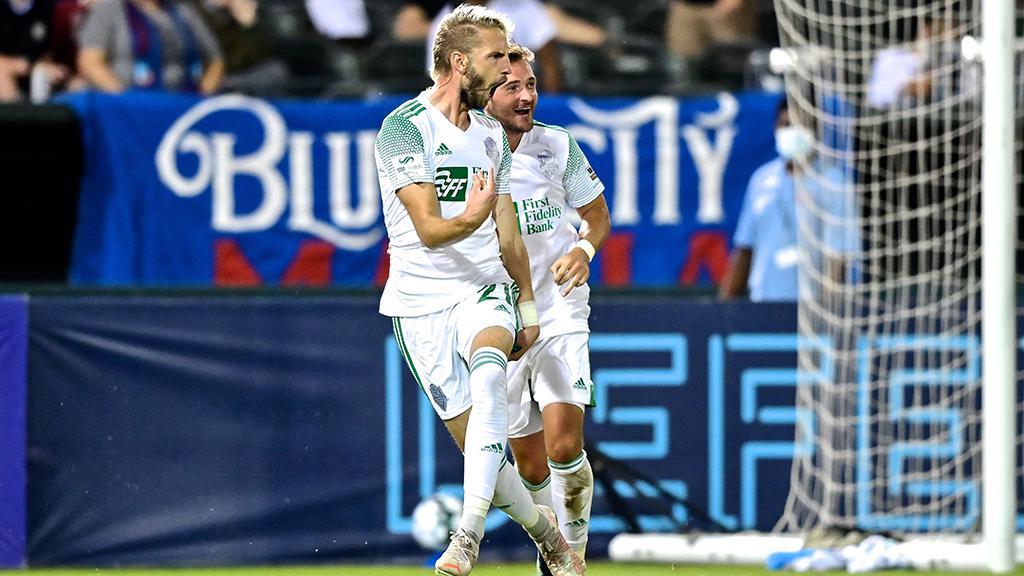 Facing the challenge of playing more than an hour down a man on Wednesday night at Memphis 901 FC, OKC Energy FC needed some big performances by its key players. It got one from goalkeeper CJ Cochran, who tied his single-game season high with seven saves to record his seventh shutout of the season at one end to earn Man of the Match honors, and another from forward Villyan Bijev, whose goal early in the second half provided the other part of a crucial three points for the side in its bid to reach the postseason for the first time since 2017.

Bijev arrived at Energy FC this offseason and has arguably been one of the best additions in the Championship in 2021. Notching his 10th goal of the season in Memphis, he’s only the fifth player in OKC history to reach double-digit goals in a campaign in the club’s eight seasons. It’s also a single-season high for the 28-year-old, whose ability to find space to work in has impressed Energy FC interim Head Coach Leigh Veidman.

“He’s not a guy who covers a lot of ground across the pitch,” said Veidman on Wednesday. “He’s very smart in where he finds spaces, he sees the opposition against different formations. He’ll always find space. He’ll exploit that space and he’ll want to work in and around the 18-yard box. Whether he’s in or out the box, he’s excellent with his feet technique. He’s good in tight spaces, he can find a way through a difficult situation.”

Energy FC will try to make it three wins in a row on Saturday evening at Sporting Kansas City II, where Bijev’s influence will likely again be key in the attacking third.

Two teams that would have been keeping tabs on Energy FC’s victory against 901 FC on Wednesday night were Indy Eleven and Atlanta United 2, and with OKC having picked up all three points those two teams now meet at Indy’s Michael A. Carroll Stadium on Saturday night with the pressure of trying to keep up with Energy FC in the race for the playoffs in the Central Division.

For Atlanta, the contest could mark the tipping point of the season. After suffering consecutive defeats to slide to sixth place in the standings taking victory is almost essential as the side enters its final 10 games of the season with a four-point gap to Energy FC that could sit at seven by the end of the night if it falls and OKC is able to pick up all three points against a Sporting Kansas City II side that is winless in its last nine games.

On the Indy side, the game might not be quite as pivotal, but you won’t be able to tell them that. The Boys in Blue will still have two games in hand on Energy FC after Saturday night’s action wraps up but keeping the gap at a maximum of three points to ensure their playoff potential remains in their hands is going to be a major incentive to add to the 2-0 win they took last time out against Real Monarchs SLC.

MIAMI WILL NEED DEPTH TO SHINE IN VISIT TO CHARLOTTE

Miami FC is on a six-game undefeated streak as it heads to the Charlotte Independence on Saturday night at American Legion Memorial Stadium, and has taken victory in each of the prior two meetings between the sides this season. The game falling in the middle of this week’s FIFA 2022 World Cup Qualifying is going to be a test for the side, however, with four players – including the key figure of midfielder Speedy Williams – set to be absent due to national team duty.

Williams started for Jamaica on Thursday night in the Reggae Boyz’s contest with Mexico at Estadio Azteca and was joined in the squad by last Sunday’s two-goal standout in Lamar Walker. Also called up was recent signing Joshua Perez, who saw action in El Salvador’s 0-0 draw with the United States Men’s National Team to open La Selecta’s qualifying bid on home turf, while goalkeeper Brian Sylvestre is with Haiti for a pair of exhibitions.

With the improvements the Independence have made since the last meeting between these sides on June 26 led by the signing of former Premier League title-winner Christian Fuchs to bolster the back line as well as the former Newcastle United duo of Sylvain Marveaux and Gabriel Obertan, Miami’s depth is going to be tested as it looks to remain in touch with Pittsburgh and Tampa Bay at the top of the Atlantic Division.