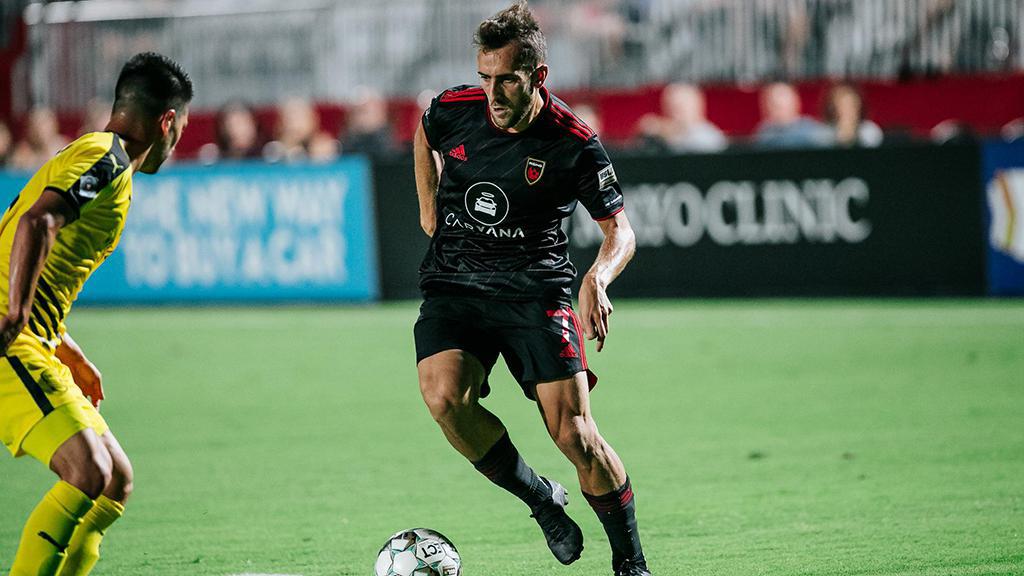 PHOENIX – Santi Moar scored a 90th-minute winner as Phoenix Rising FC rallied for victory for the first time this season in a 3-2 win against New Mexico United on Saturday night at Wild Horse Pass that saw Joey Calistri also score twice for the hosts as they continued New Mexico’s current winless streak.

Looking to break out of its own four-game run without a win, Phoenix almost grabbed an early lead as Calistri ran onto a ball over the top into the right side of the penalty area by Aodhan Quinn and cut back past one defender before New Mexico’s Austin Yearwood blocked his shot to safety. The hosts went close again in the fourth minute as Arturo Rodriguez shot just wide of the left post from the edge of the penalty area, while a minute later a neat piece of interplay set up New Mexico’s first chance as Devon Sandoval fired just wide of the right upright.

The visitors took the lead in the 11th minute, however, as Andrew Tinari played a pass forward that was dummied by Chris Wehan outside the penalty area, letting the ball run for Sergio Rivas, who shot into the left corner of the net. Phoenix had a chance five minutes later to level, but Calistri was unable to find the target with a bouncing shot that was also just out of the reach of David Egbo as he slid in to try and apply a finishing touch.

New Mexico had another pair of chances that went just off the mark shortly before the half-hour mark, while Josh Suggs also had a go seven minutes before the halftime break as he created space for a shot from the left side of the penalty area that slid wide of the right post.

Rising FC had the last big chances of the first half as a free kick from the left by Rodriguez was headed on target by Joey Farrell only for Tambakis to be equal to the task, and the Greek shot-stopper came up big again in stoppage time with a one-handed save to deny a low shot from 25 yards by Calistri. That continued into the second half as Rodriguez fired a shot from just inside the penalty area that was parried by Tambakis and cleared by his defense, but just before the hour-mark Phoenix’s pressure told as Calistri struck. Moar played a pass to Quinn on the left, who delivered a pass through the penalty area that picked out Calistri in the right side of the penalty area for a first-time shot that found the left corner.

Calistri went close again two minutes later as Rodriguez found him in space in the right side of the box for a low shot that Tambakis saved with his legs. In the 66th minute the Illinois native struck again, however, as the ball deflected his way 30 yards from goal, and he quickly wound up for a drive that picked out the bottom-left corner of the net.

Jamaican international Darren Mattocks then almost marked his Phoenix debut with a goal as shortly after coming on as a substitute he was played in behind the defense by Rodriguez but sent his finish wide of the right post. But with 10 minutes to go the visitors pulled level as a cross from the left by Yearwood was punched by Rawls into his defender James Musa, which saw the ball carom over the goalkeeper and into the net for an own goal.

Rising FC quickly went on the attack and Calistri was denied his hat trick in the 84th minute as Moar drove to the byline on the left and cut a cross back through the penalty area where Calistri’s shot was blocked by Yearwood. The Spanish winger was involved again two minutes later as he flicked a pass on for Rodriguez in his own half and then took off down the left for a return ball before centering for Mattocks, whose shot flashed wide of the left post.

In the final minute, though, Moar took matters into his own hands. Switching to the right side he was played into space by Quinn 35 yards from goal and after moving into the penalty area he fired low into the bottom-left corner of the net for his ninth goal of the season to earn the hosts all three points in dramatic fashion.

Joey Calistri, Phoenix Rising FC – Calistri was rewarded for his persistence with a pair of goals after finishing the night with eight shots overall while completing 24 of 32 passes and making four recoveries.