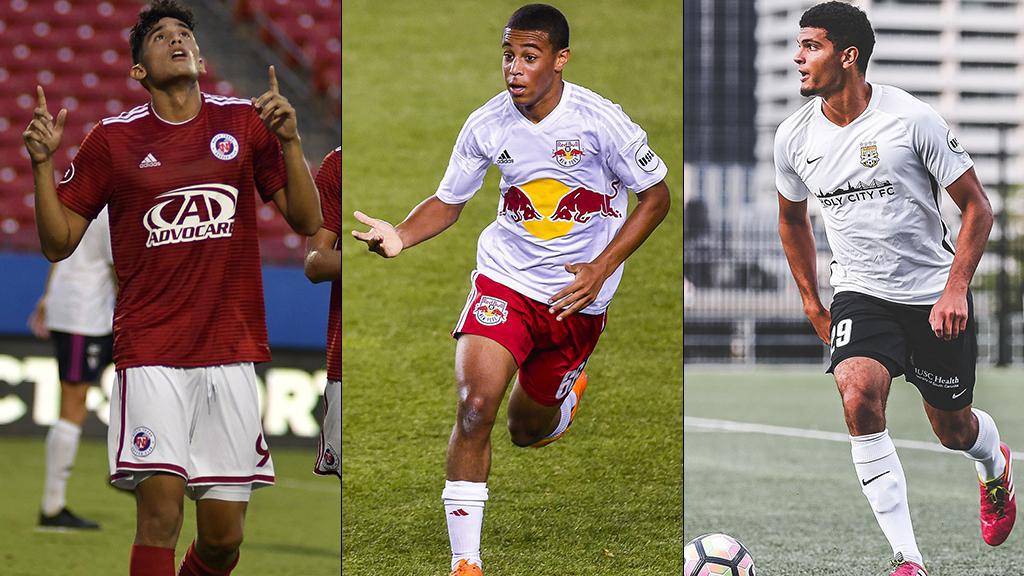 First time call-up Ricardo Pepi (left) joined Tyler Adams and Miles Robinson among the players to have previously competed in the USL Championship, League One or League Two to be named in September's U.S. Men's National Team squad for 2022 FIFA World Cup

CHICAGO – A group of 14 players that previously competed in the USL Championship, League One and League Two were on Thursday named to the United States Men’s National Team squad that will compete in the first set of 2022 FIFA World Cup Qualifying matches in September as the team begins its road through Concacaf’s Octagonal final stage of qualifying.

Among the notable selections are former North Texas SC forward Ricardo Pepi, who will join the squad for the first time after a stellar season with FC Dallas that has seen him continue his rapid ascent in the professional game. Pepi is the latest former League One player to earn a senior USMNT call-up, following among others former NTSC teammates Tanner Tessmann and Bryan Reynolds, alongside whom he claimed the 2019 USL League One title.

The United States will visit El Salvador on Thursday, September 2 to open its qualifying campaign before hosting Canada in Nashville, Tenn. on Sunday, September 5 before closing its three-game run with a visit to Honduras on Wednesday, September 8.

Players with past appearances in the USL Championship, USL League One and USL League Two have been named in the squad for the United States opening games of 2022 FIFA World Cup Qualifying in September

Brenden Aaronson, Philadelphia Union II (2017-18): Aaronson is the first of two players that came through the Union II on his way to Europe, where he this year won the league and cup double with Red Bull Salzburg in Austria and scored on Wednesday for the club to help it qualify for the group stage of the 2021-22 UEFA Champions League. Aaronson made 24 appearances and recorded one goal and five assists for the Union II across his two seasons, and helped the side claim its first postseason victory when it defeated Pittsburgh Riverhounds SC in a penalty shootout in the 2018 USL Championship Playoffs.

George Bello, Atlanta United 2 (2018-20): Bello took his first steps into the professional ranks with ATL UTD 2 as a 16-year-old during the 2018 season. He went on to make 19 appearances overall and record one goal in just over 1,000 minutes of action for the side before moving full-time into Atlanta’s MLS squad.

Sebastian Lletget – LA Galaxy II (2015): Sometimes you need a tune-up, and that’s exactly what Sebastian Lletget’s one appearance for Los Dos served as against Colorado Springs Switchbacks FC as he got acclimated after a move from West Ham United earlier that year. Four years after his senior national team debut, Lletget has become one of the regular members of Head Coach Gregg Berhalter’s squad.

Mark McKenzie – Philadelphia Union II (2016-2019): It’s remarkable to think that it’s only been two years since Mark McKenzie last suited up in the Championship for his final six appearances for the Union II, but that’s how quickly the big center back has risen up the depth chart for the USMNT. McKenzie made his debut for the Union II in 2016 and made a total of 17 appearances overall, recording 31 interceptions and 68 clearances in his final three years.

Ricardo Pepi – North Texas SC (2019-20): A native of El Paso, Texas, Pepi burst onto the scene in the opening weeks of USL League One’s inaugural season for North Texas SC as he became the first player to record a hat trick in the league in NTSC’s inaugural game, a 3-2 victory against Chattanooga Red Wolves SC. Pepi went on to record nine goals and earned League One All-League honors while helping his side claim the inaugural League One title at the end of the season as he scored twice in the postseason. The 18-year-old has since gone on to become the youngest player to record a hat trick in Major League Soccer history this season for FC Dallas, and now earns his first call-up to the senior U.S. Men’s National Team.

Tim Ream – Chicago Fire U-23 (2008-09): One of the team’s veterans, Ream spent two seasons in USL League Two with the Chicago Fire U-23 and made 19 appearances for the side as he competed collegiately for Saint Louis University. In 2009 he competed for a Fire U-23 side that reached the USL League Two Final alongside fellow future professionals including Jimmy Maurer and Justin Morrow, and has since gone on to make almost 50 appearances for the UNMNT and more than 350 appearances in the professional ranks both in the United States and England.

Miles Robinson – Charleston Battery (2017), Atlanta United 2 (2018): Robinson took some time to emerge in the professional ranks, making six appearances on loan with the Battery in his rookie season before recording another 14 with Atlanta United 2 in the 2018 season. That seemed to set him up for success, with the youngster earning MLS Best XI honors in 2019 while making three senior international appearances going into the Gold Cup, where he helped lead the United States to victory and was named to the tournament's Best XI.

Cristian Roldan – Tacoma Defiance (2015): Roldan only made one appearance for the Defiance, but it certainly was a memorable one. Selected by Seattle Sounders FC in the 2015 MLS SuperDraft, the former University of Washington standout made his debut in the Defiance’s first game in the Championship and scored in the side’s 4-2 victory against Sacramento Republic FC. It’s been up and up ever since.

James Sands – Louisville City FC (2018): Three years ago, Sands headed to Louisville City FC on loan from New York City FC for a short stint on loan in the 2018 season where he impressed with his composure on the ball in going the full 90 minutes in all three appearances. Sands notched an assist for LouCity, and helped the side record two clean sheets while he was at the club.

Josh Sargent – Saint Louis FC U23 (2016): Sargent was one of the highly-regarded prospects in the United States five years ago, representing the U.S. U-17 Men’s National Team as it began to prepare for the 2017 FIFA U-17 World Cup, but he also moonlighted for a pair of games for Saint Louis FC U23 in its first season, with the side drawing from the talent within the St. Louis Scott Gallagher Soccer Club in its inaugural season in USL League Two. Sargent scored once in his two appearances before returning to the U.S. Soccer Residency at IMG Academy and is now an established part of the senior USMNT squad.

Zack Steffen – Pittsburgh Riverhounds SC (2016): Steffen arrived on loan with Pittsburgh Riverhounds SC on loan from Columbus Crew SC after returning from an early stint in Europe, and arguably began his ascent to the top of the USMNT goalkeeping depth chart at Highmark Stadium. In nine appearances for the Hounds, Steffen recorded two shutouts and 37 saves before returning to Columbus the following year and becoming the club’s No. 1. Now at Manchester City, Steffen is entering his prime at the top of his game.

Matt Turner – Richmond Kickers (2016-17): A former USL League Two standout, Turner made a handful of appearances for the Kickers in his rookie season in 2016 but then came into his own with 20 appearances for Richmond the following year. Now established as one of the top goalkeepers in Major League Soccer with the New England Revolution, Turner recorded 81 saves and seven shutouts while competing for the Kickers that helped set up his future success, which this summer saw him named Golden Glove at the 2021 Concacaf Gold Cup in leading the United States to victory at the tournament.

DeAndre Yedlin – Sounders FC U23 (2012): A graduate of the Seattle Sounders FC Academy, Yedlin returned to the Pacific Northwest in 2012 and had an outstanding season in USL League Two for the Sounders FC U23s, appearing in all 16 games and recording one goal and one assist on his way to being named to the League Two All-League Team at the end of the season. The following year he signed as a Homegrown Player with the Sounders and has gone on to achieve success both domestically and overseas in addition to making 16 appearances for the USMNT.