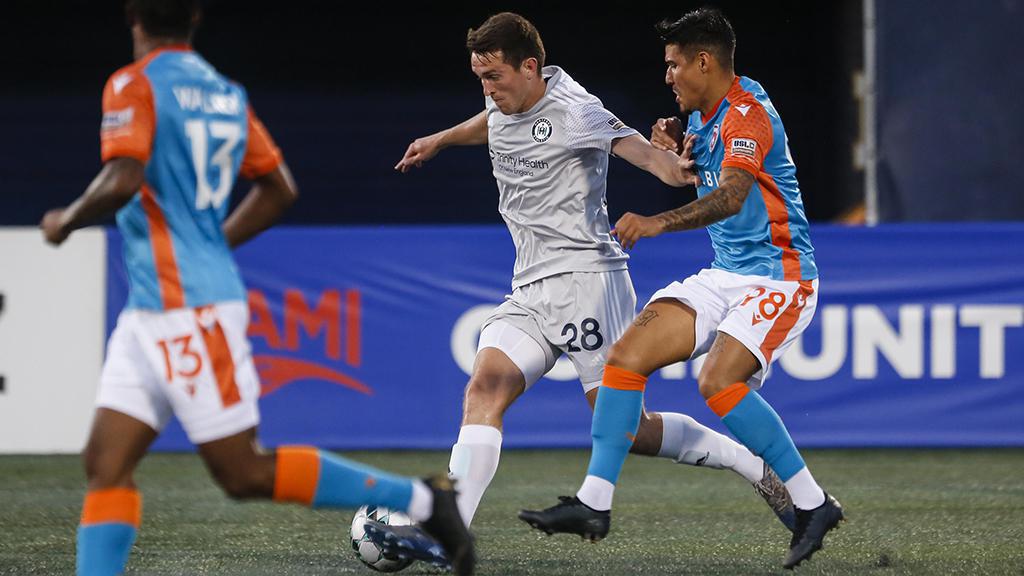 Hartford Athletic can complete an undefeated regular season slate against Miami FC on Sunday at FIU Stadium, with Conor McGlynn and his teammates having been the puzzle Miami has been unable to solve in three prior meetings. | Photo courtesy Orovio Photog

After some key midweek results helped reshape the standings in the Eastern Conference, a Sunday-heavy slate of games arrives this weekend with some intriguing matchups across both divisions as well as a must-see interconference clash on Saturday night. Here are five things to keep an eye on.

Of the Atlantic Division foes Miami FC has faced this season, a setback has typically been followed by success. The South Florida side fell in its opening game against the Tampa Bay Rowdies, only to win two in a row on home turf to turn that series – and in some ways the club’s season – in its favor, and accomplished the same against the Charleston Battery, winning the most recent meeting between the sides on August 1 after falling previously at Patriots Point.

The one team that hasn’t been true for, though, is Hartford Athletic, which visits FIU Stadium on Sunday evening having taken two wins and a draw in their prior three meetings this season. Hartford earned a 1-0 win thanks to Preston Tabort Etaka on May 8 when it last headed south, and subsequently took both a 2-0 victory on July 24 and a 1-1 draw on August 4 in their two more recent meetings at Dillon Stadium.

Hartford has been a little more up-and-down in recent weeks than in its strong start to the season, but the reinforcements the club added this week in New York City FC loanee Justin Haak and Guatemala international Darwin Lom both provided positive impacts in the Athletic’s 2-1 victory against the Charleston Battery on Tuesday night. Miami is within touching distance of both the Rowdies and Pittsburgh Riverhounds SC, three points back of both as it enters the weekend, but it will have Hartford tapping on its shoulder if it can’t find a way to solve the one division rival it has found tricky to handle this season.

TULSA LIVING ON THE DEFENSIVE EDGE

As someone who was bullish on where FC Tulsa was heading at the start of this season, the struggles the side has endured with only four wins in its past 14 games have been a real headscratcher. The numbers say the side has both overperformed in attack – its 26 goals are well ahead of its 21.60xG mark according to American Soccer Analysis – and underperformed defensively – its 31 goals against are well beyond its 27.23xGA mark – leading to the side sitting in the middle of the Central Division tied on points with Indy Eleven and OKC Energy FC going into Sunday’s game with Birmingham Legion FC.

Finding consistency in the defensive end is obviously going to be the easiest path to the playoffs from here for Head Coach Michael Nsien’s side. Tulsa is tied for third in the league with three errors leading to goals and tied for seventh with six errors leading to shots this season, which accounts for some of the disparity in the club’s defensive performance. Against an attack that’s starting to find its form again with Neco Brett and Junior Flemmings leading the way, though, being buttoned up in the defensive third is going to be a must to get the ship turned fully back in the right direction. 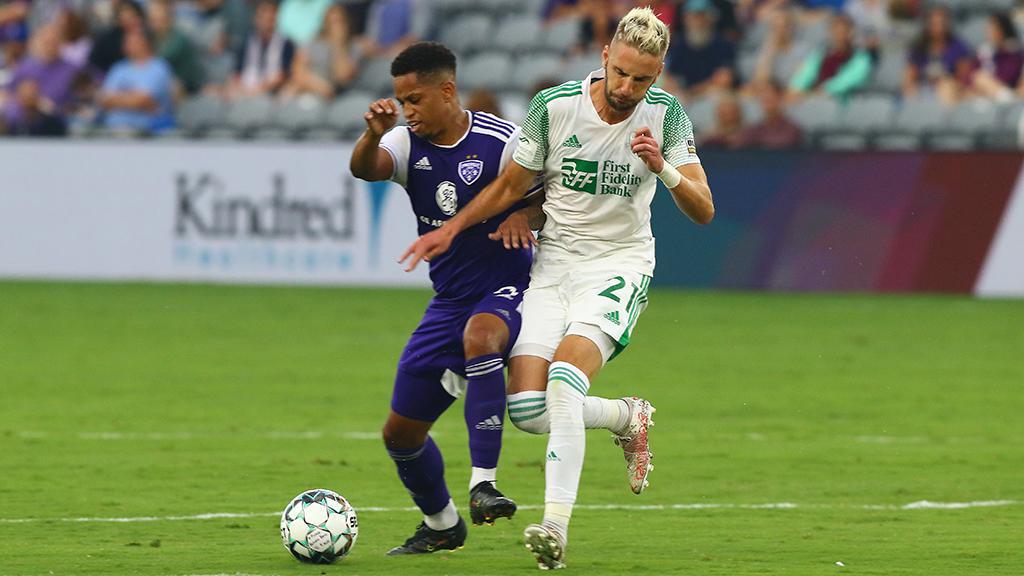 OKC Energy FC's Villyan Bijev has produced impressively for the side this season but will need more support if OKC is to get a result at home to Louisville City FC on Sunday night. | Photo courtesy Em-Dash Photography / Louisville City FC

The manner in which OKC Energy FC turned itself into a playoff contender after going winless in the first eight games of the season was admirable, but those efforts have started to meander and that’s only raised the pressure for the visit on Sunday evening of Central Division leader Louisville City FC to Taft Stadium. The main question for the hosts will be what lessons the side learned from its two defeats at Lynn Family Stadium, and whether it can kickstart its own attack leading into a key stretch of games in the next three weeks.

OKC has received stellar production this season from offseason arrival Villyan Bijev, but the side as a whole hasn’t found the consistency it needs from players like Jaime Chavez, who is still yet to find the net this season, or Frank Lopez, who has notched four goals, with both players unable to consistently be available on the field. Bijev’s xG+xA rating of 10.47 is more than double that of any of his teammates according to American Soccer Analysis, a sign of how isolated he’s been in leading the line. If Energy FC is going to take its chance to be a playoff side this season in an inconsistent Central Division, someone else is going to have to step up first against Louisville and then over the coming weeks to give what has been a solid defensive unit the reward it deserves at the attacking end.

The Charlotte Independence are undefeated in their past four games, winning three, to make a serious push into the playoff race in the Atlantic Division where they now sit a point outside the top four after Hartford Athletic’s victory against the Charleston Battery on Tuesday night. That surge will get a serious test on Saturday as Colorado Springs Switchbacks FC heads to American Legion Memorial Stadium for what looks on paper like an intriguing battle between the Switchbacks’ attack and Charlotte’s back line.

The Independence did an excellent job last weekend against a Pittsburgh Riverhounds SC attack that had come in on a tear, and you could see similar principles adopted this time around to try and slow down Golden Boot leader Hadji Barry and the third-highest scoring team in the league. Pushing play wide, trying to keep the ball out of the center of the field certainly proved effective against the Hounds, who recorded only one shot on goal in the Independence’s 1-0 victory.

The flexibility of Colorado Springs’ attack is a different animal, though, as while Barry is essentially the No. 9 in the Switchbacks’ conventional 4-2-3-1 set-up, his ability to drop into midfield and help pull opposing defenses and midfield positions out of shape has been a major key to the side’s success. The experience and discipline in Charlotte’s back line – now led by Christian Fuchs – will get tested as the Independence, will want to try and play a similar patient game and keep the Switchbacks from getting out in transition moments where their speed and skill on the ball can wreak havoc.

It’s strange to think of a team like the Charleston Battery that has been consistently part of the postseason picture in the Championship’s history to have struggled with an individual opponent, but that’s been the case in the club’s history with the New York Red Bulls II. When the teams meet on Friday night at MSU Soccer Park, it will have been more than five years since the Battery took victory against their northeastern nemesis, with their last – and only – victory in the all-time series having come on July 23, 2016.

As much as the Red Bulls II have struggled at home this season, though, this is a chance the Battery have to take advantage of. Still in sixth place in the Atlantic Division after Tuesday night’s defeat in the first leg of its trip north against Hartford Athletic, picking up three points is going to be crucial for the side’s playoff aspirations as well as throwing the hex the Red Bulls II have held over them off.

“The biggest thing is the start of the game, especially when you play a Red Bulls II team,” said Battery Head Coach Mike Anhaeuser. “We need to be ready defensively, the guys back there have to be ready for their press. At the same time, you want to catch them, because you know they press and they put pressure on and step up high, if you can catch them, you can get an early goal.”