TAMPA, Fla. – The USL Championship announced the Team of the Week Presented by Cleer Audio for Week 17 of the 2021 regular season on Tuesday, with Miami FC midfielder Speedy Williams voted Player of the Week after recording a pair of goals in his side’s comeback victory against Pittsburgh Riverhounds SC and helping Miami earn four points over its two games during the week overall.

A 2020 USL Championship All-League First Team selection, Williams has been a notable part of Miami FC’s turnaround in its second season in the Championship. The Jamaican international – who competed this summer at the 2021 Concacaf Gold Cup for his country – was at the center of a big road victory for Miami last Wednesday night, scoring twice. Williams scored the late game-winner from the penalty spot, helping the visitors rally from a two-goal deficit early in the second half to take a 3-2 victory. Miami is now only two points off top spot in the Atlantic Division while sitting undefeated in its past four games.

Williams earned 33 percent of the ballot to claim the honor, narrowly edging out Atlanta United 2 forward Phillip Goodrum on 27 percent, who had two goals and one assist after coming on as a halftime substitute in his side’s 4-1 victory against Sporting Kansas City II on Saturday evening. 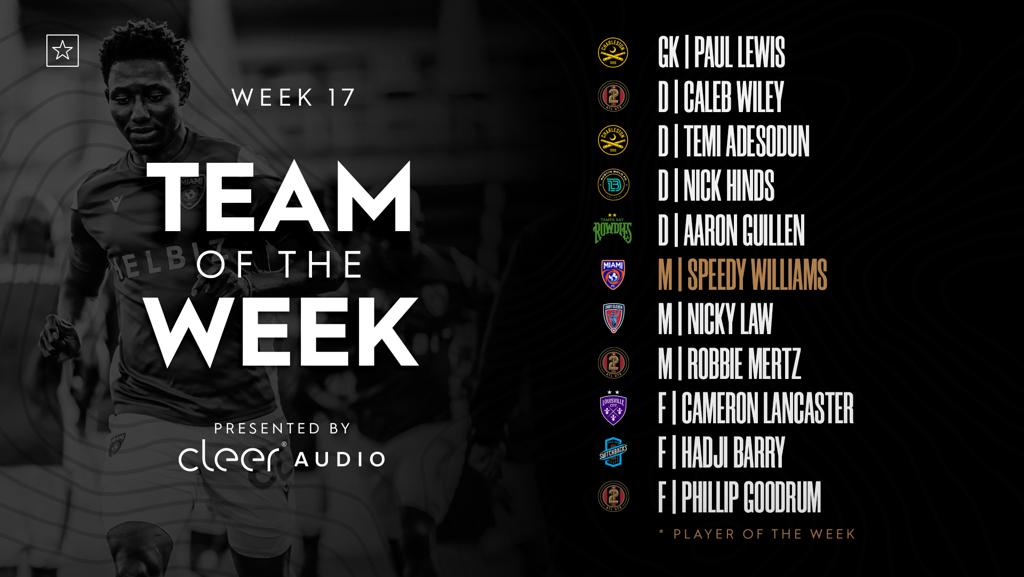 GK – Paul Lewis, Charleston Battery: Making only his second professional start, Paul Lewis recorded a two-save shutout against Loudoun United FC, including a key first-half penalty kick save to keep the game scoreless. The Battery were able to secure three points with a late winner in their pursuit of a playoff place.

D – Nick Hinds, Austin Bold FC: Nick Hinds helped Austin Bold FC’s back line contain Miami FC in a 0-0 draw on Saturday night. He won 6 of 7 duels and made six recoveries while completing 37 of 44 passes and recording a pair of shots as he joined the attack.

D – Aaron Guillen, Tampa Bay Rowdies: Aaron Guillen won 4 of 4 tackles and 7 of 7 duels while making four interceptions and completing 48 of 55 passes as the Rowdies held Hartford Athletic to only two shots in a 1-0 win at Al Lang Stadium on Friday night.

M – Speedy Williams, Miami FC: The Jamaican international helped his side to four points on the road over the week, including scoring two goals in Miami’s comeback 3-2 victory against Pittsburgh Riverhounds SC on Wednesday night. He completed 111 of 130 passes, won 3 of 3 tackles and made 15 recoveries across two games.

M – Robbie Mertz, Atlanta United 2: Robbie Mertz had one goal and two assists across a pair of games as Atlanta took four points from its week of action, and additionally completed 62 of 73 passes overall while winning 9 of 15 duels.

F – Phillip Goodrum, Atlanta United 2: Phillip Goodrum came on as a halftime substitute on Saturday against Sporting Kansas City II and made an immediate impact, notching a goal and assist inside 10 minutes before adding his second goal of the game to wrap up a 4-1 victory for the side.