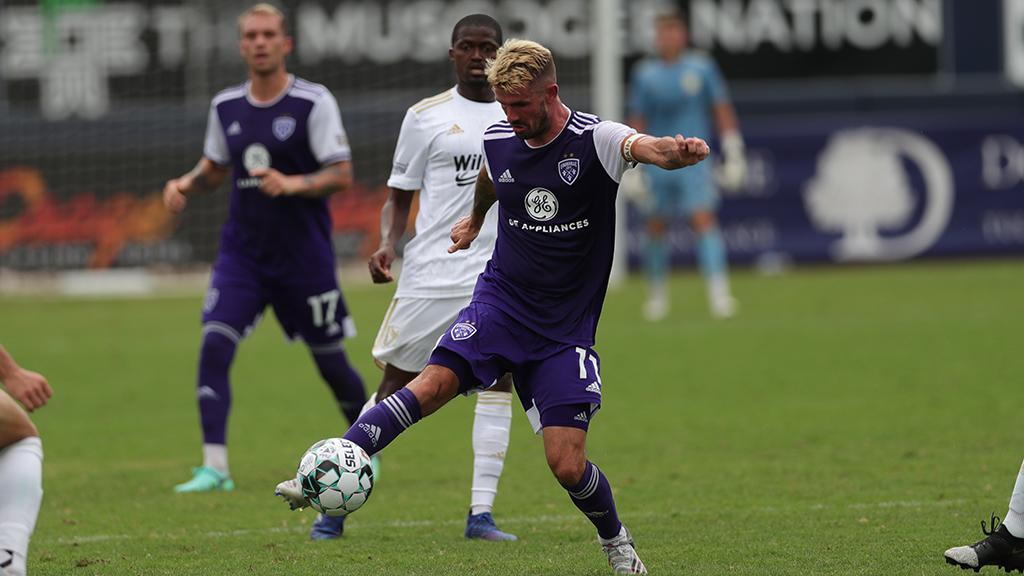 Early goals have been the defining characteristic in the two meetings between Louisville City FC and FC Tulsa this season, with the sides set to meet for a third time on Saturday at Lynn Family Stadium. | Photo courtesy FC Tulsa

After a busy couple of nights in midweek, the USL Championship’s Eastern Conference gets back into action on Friday and Saturday night with some must-see games that are set to shape the race for the playoffs – and first place in the Atlantic – on the slate. Here are five things to look out for as the action unfolds.

If there’s been a theme to the two prior meetings between Louisville City FC and FC Tulsa this season – both at ONEOK Field – it’s been setting a tone early. In the first contest between the sides on June 19, LouCity took the lead in just the second minute and proceeded to rattle off three goals in the opening 10 on the way to a 3-2 victory as Cameron Lancaster struck twice. In the second on July 10, Tulsa turned the tables as Marlon scored in the sixth minute before the hosts pulled out to a three-goal lead of their own late in the first half and then held firm to a 3-2 victory of their own.

As the scene switches to Lynn Family Stadium on Saturday night – where Louisville has won eight of 11 games overall this season including four consecutive victories after last Saturday’s 4-1 victory against Sporting Kansas City II – finding that early goal could be the key for both sides. With LouCity’s attack led by Lancaster, Kyle Greig and especially in recent weeks Brian Ownby coming into form with 20 goals in eight games since the start of July, there’s a confidence that come from putting away chances consistently will bring.

“We know we have the talent, work ethic, and attack and it’s just finding that final piece – final pass – because you see we get there a lot in the final third and it’s a final connection and we could be banging in four or five goals every game,” said Ownby. “It’s just working on that final product. We know we have it, it’s just being patient and letting the game come to us and I think we did that after the first goal.”

HOW WILL HOUNDS RESPOND AFTER DEFEAT IN CHARLOTTE TRIP?

Wednesday night produced a rarity for Pittsburgh Riverhounds SC in the tenure of Bob Lilley as Head Coach. The 3-2 defeat to Miami FC at Highmark Stadium marked the first game in which the side had suffered defeat after holding a two-goal lead in the regular season since he arrived prior to the 2018 campaign. The result also snapped a four-game winning streak for the side and reopened the competition for first place in the Atlantic Division with Miami now alongside the Tampa Bay Rowdies only three points back of the Hounds for top spot.

“Up 2-0, we should have found more intensity to keep it 2-0 as long as possible, and to fight, even when they got a goal back to stay at 2-1,” said Lilley. “To just have a collapse where we shot ourselves in the foot, I think we played on our heels too much in the second half, and I think even at 2-2, we needed to go forward and get balls forward. … The reason you’re up 2-0 is that you’re trying to win the game. At 2-2, how much time was left, 30 minutes? Try to win the game. Instead, it felt like we were trying to hang on for a draw, and eventually, we lost the game.”

The big question now is how the Hounds will respond as they get another challenging contest against the Charlotte Independence on Saturday night at American Legion Memorial Stadium. The Independence are coming off a 3-2 victory of their own on Tuesday night against the New York Red Bulls II and are undefeated in the last three games to move back into the playoff race at the midway point of the season. Pittsburgh will need to pick itself up quickly from one of its most disappointing displays in recent history.

INDY MUST TAKE ADVANTAGE OF MIDWEEK RESULTS AS OKC VISITS 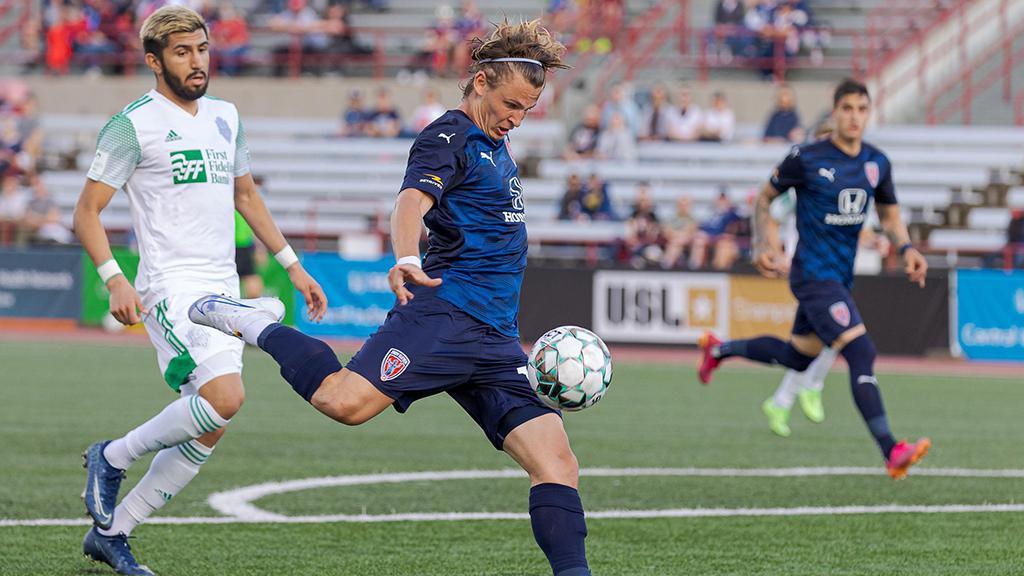 Indy Eleven's Gordon Wild shapes to shoot in the first game his side hosted against OKC Energy FC this season. The sides meet again on Saturday at Michael A. Carroll Stadium in a playoff six-pointer. | Photo courtesy Trevor Ruszkowski / Indy Eleven

For all the trials and tribulations Indy Eleven has faced this season – with last Sunday’s 6-2 drubbing at the hands of Atlanta United 2 at the top of the list given the manner in which the Boys in Blue contributed to their own downfall – the fact remains that the side is still in with a solid chance of reaching the USL Championship Playoffs with half a season to go. That point was hammered home over Week 17’s midweek action, which saw Memphis 901 FC play to a draw on Tuesday night against Colorado Springs Switchbacks FC before Atlanta bagged a dramatic late equalizer against OKC Energy FC on Wednesday in a thrilling 2-2 result.

That has kept the door open for Indy as it plays host to Energy FC on Saturday night at Michael A. Carroll Stadium, with the potential a win could send the side back above the playoff line from seventh position if it can claim all three points. That’s been a major challenge for Indy at The Mike this season, though; the Boys in Blue have won just once in eight games so far this campaign at home, and that came back on May 22 against Sporting Kansas City II.

There’s no question about the quality that this side possesses on paper – players like forwards Manuel Arteaga and Jordan Hamilton have shown that in flashes throughout the season – but it hasn’t added up to consistent performances on the field. If Indy can muster that against OKC this weekend, it would go a long way to putting the Atlanta defeat in the rear-view mirror and fostering some belief that this side can go places over the final two-and-an-half months of the season.

CAN TAMPA BAY FIND ITS SHOOTING BOOTS AGAINST HARTFORD?

You don’t need to remind anyone in Tampa Bay’s locker room about what happened the last time Hartford Athletic visited Al Lang Stadium. Despite racking up the second-highest single-game Expected Goals mark of the season against the Athletic at 3.98xG, a combination of the woodwork, Hartford goalkeeper Jeff Caldwell and some profligate finishing saw the hosts suffer a 1-0 defeat on Derek Dodson’s first-half goal.

The good news for Tampa Bay is that attacking help is on the way. Steevan Dos Santos appears likely to see action again for the first time since his stellar start to the season that saw him bag goals, joining Lucky Mkosana in becoming another attacking option beside the consistency of captain Sebastian Guenzatti. Juan Tejada is also close to returning as well having yet to play this season, offering another good scoring option for Head Coach Neill Collins, who is getting ready to put the pieces together to help his side find success in front of goal.

“For me, it’s not necessarily about what areas to improve, but it’s to find out how we can maximize once these guys are back,” said Collins this week. “How successful can we be by putting these guys in the right position?... It all comes back to how can we get these pieces fit and then start utilizing them the right way.”

The Rowdies could certainly be due some good fortune, at least, in front of goal. The side ranks fifth in the Championship in Expected Goals at 29.28xG but has only scored 22 times this season. Guenzatti’s dip in form has been a factor in that with only one goal and one assist in his past six appearances, but with the opportunity to move level on points with Pittsburgh on Friday night there’s a big opportunity for Tampa Bay to make a statement to the rest of the division.

INDEPENDENCE’S FUCHS HAPPY TO BE BACK, READY FOR HOME DEBUT

If there was any rustiness on Christian Fuchs’ part in his first official game since last December this past Tuesday night for the Charlotte Independence, the former Premier League title-winner and Austrian captain shook it off well in what proved a notable individual performance in the side’s 3-2 victory against the New York Red Bulls II that moved Charlotte only a point out of the playoff places in the Atlantic Division.

Not everything went Fuchs’ way – he got beaten on New York’s opening goal by Omar Sowe – but his awareness was in evidence as he racked up a game-high 15 recoveries and made five clearances and three interceptions to help the visitors see out the win on a rainy night at MSU Soccer Park. Now the 35-year-old is set for his home debut against Pittsburgh Riverhounds SC on Saturday night at American Legion Memorial Stadium and is looking forward to getting out in front of the Charlotte soccer community for the first time.

“I’m very happy for a positive debut,” said Fuchs. “It felt great to be on the field again and to compete. We performed well which is due to the defensive discipline that every player showed. I’m looking forward to my first home game against Pittsburgh, and we will try to continue building momentum for the rest of the season.”