TAMPA, Fla. – The USL Championship announced the Team of the Week Presented by Cleer Audio for Week 16 of the 2021 regular season on Tuesday, with Atlanta United 2 forward Tyler Wolff voted Player of the Week after recording a hat trick and an assist to lead his side to a 6-2 victory against Indy Eleven on Sunday night at Fifth Third Bank Stadium.

The 18-year-old was in the middle of a club record-setting performance for Atlanta, opening the scoring after just 12 seconds for the fastest goal in its history and tying for the fourth-fastest goal in the Championship’s history overall. Wolff went on to bag another goal in the sixth minute before completing his first professional hat trick and adding an assist early in the second half. The victory moved Atlanta above the playoff line into fourth place in the Championship’s Central Division ahead of a key game with fifth-placed OKC Energy FC on Wednesday night, also at Fifth Third Bank Stadium.

Wolff earned 90 percent of the ballot to claim the honor. Colorado Springs Switchbacks FC’s Andre Lewis was the lone other recipient of votes after he scored his first two goals of the season to lead the Switchbacks to a thrilling 4-2 victory against Hartford Athletic on Saturday night that moved the side up to third place in a tight playoff race in the Mountain Division. 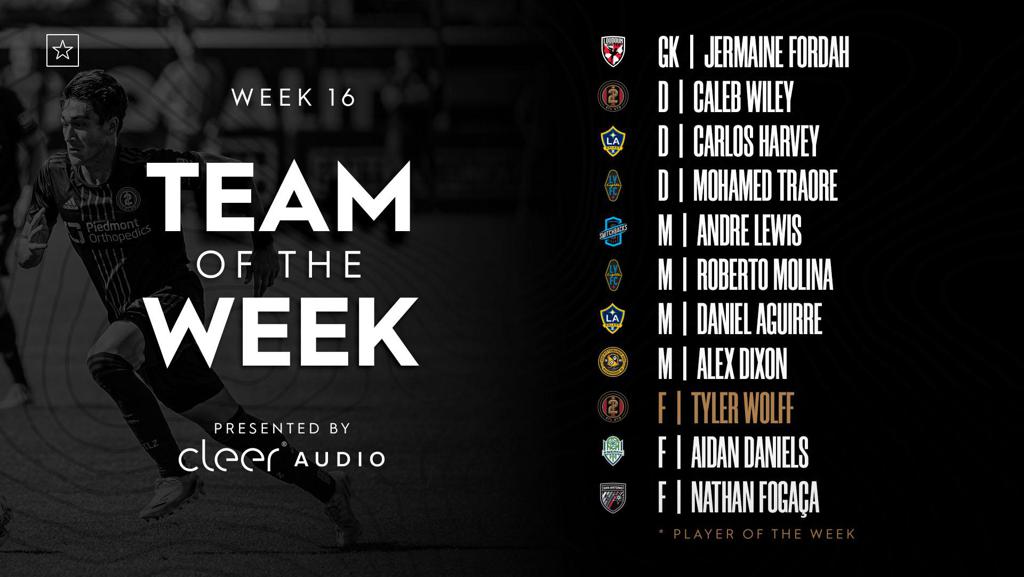 GK – Jermaine Fordah, Loudoun United FC: The English goalkeeper recorded a six-save shutout including five saves on shots from inside the penalty area on Friday night in a 0-0 draw against the Charlotte Independence at Segra Field.

D – Caleb Wiley, Atlanta United 2: The 16-year-old recorded one assist and five key passes while completing 55 of 64 passes overall and winning 4 of 5 duels in Atlanta’s 6-2 victory against Indy Eleven on Sunday night.

M – Andre Lewis, Colorado Springs Switchbacks FC: The Jamaican midfielder scored his first two goals of the season on three shots and also had one key pass and completed 33 of 37 passes overall while winning 7 of 10 duels in the Switchbacks’ 4-2 victory against Hartford Athletic on Saturday.

M – Daniel Aguirre, LA Galaxy II: Daniel Aguirre scored the game-winning goal in the 87th minute of Los Dos’ 3-2 victory against Orange County SC on Saturday night while also completing 27 of 32 passes and winning 10 of 18 duels and 2 of 2 tackles.

M – Alex Dixon, Pittsburgh Riverhounds SC: Earning his third consecutive selection to the Team of the Week, Alex Dixon recorded his second consecutive two-goal game and had one key pass while completing 21 of 28 passes overall in the Hounds’ 3-2 win against the Charleston Battery on Friday night.

F – Aidan Daniels, OKC Energy FC: The Canadian U-23 international scored twice late in the first half to send Energy FC on its way to a 4-1 victory against Memphis 901 FC in a key game in the Central Division playoff race while also completing 30 of 37 passes.