San Antonio gets to turn the tables on Toros after busy stretch; Las Vegas’ progression on show in Phoenix draw 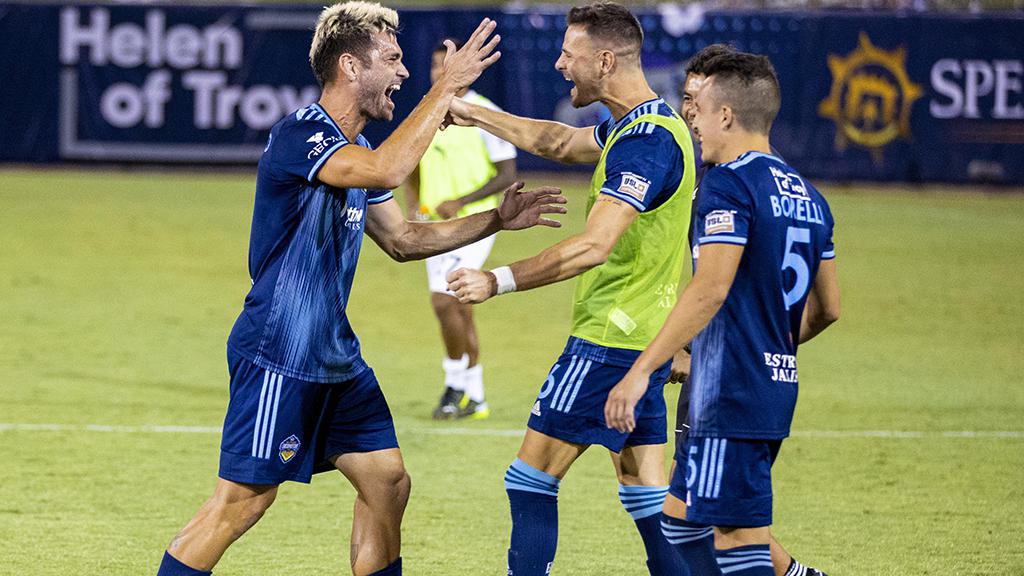 There were some wild endings in the USL Championship’s Western Conference this weekend, and after the dust settled the playoff races in both the Mountain and Pacific Divisions look intriguing at the midway point of the season. Here are five things we took away from past two days of action.

EL PASO MOVES INTO POINTS LEAD AS CONSISTENCY BEARS OUT

El Paso Locomotive FC entered the final leg of a tough run of five games in 15 days on Saturday night, but it didn’t show in the performance they put in as the rotation and depth of the squad that’s been on display produced a 3-0 win against an Austin Bold FC side that has been one of the better road squads in the season. The win now sees El Paso sitting on top of the Championship with 37 points at thehalfway point of its season, one point ahead of Western Conference rival Phoenix Rising FC and Eastern Conference leader as Head Coach Mark Lowry’s means for dealing with the tough stretch came through in ideal fashion.

“We took these two weeks and compartmentalized it,” said Lowry after the win against Austin. “Let’s win all of these games, focus on and manage this squad for these five games. Up to today, it was three wins and a tie, so it’s been good. Don’t lose tonight and ruin the work we’ve done over the last 10 days. Let’s finish the job. That was the message in the locker room. Get a win, get a good performance, entertain the fans, finish the job so we can feel good about our work over these last two weeks.”

The key for Locomotive FC this season has been to produce consistency, and while there were some fluctuations in performance – especially defensively in the side’s 2-1 victory on the road at San Antonio FC on July 28 – over the past five games that has been borne out in El Paso’s overall numbers. The side is currently holding opposing attacks to fewer than 1.00 Expected Goals per game (15.60xGA in 16 games) and that has given the side a foundation to build on every outing. With the attack producing consistently with 26 goals as Diego Luna and Luis Solignac’s introductions have had the desired effect, Locomotive FC looks poised as it readies for the second half of the campaign.

As tight as the race for the playoffs is in the Mountain Division, every victory is going to help. If it comes at the expense of your biggest rival, all the better. For San Antonio FC, that was the case on Sunday night as it took a 2-1 win against Rio Grande Valley FC to square the South Texas Derby this season but maybe more importantly moved back above the playoff line into fourth place in the division standings.

“A lot of guys had a lot of resilience today,” said SAFC defender Connor Maloney. “This is the fourth game in 11 days so you couldn’t ask for much more than the guys gave today. We are happy with the result and with how the guys fought until the last second. We take this win and now we are in good position as we enter the final stretch of the season.”

San Antonio is still going to have work to do to reach the postseason, but at least for now the schedule is going to ease up. After Saturday night’s interconference visit to the New York Red Bulls II – a game that will take Chris Lema back to face his former club – San Antonio gets three consecutive home games including must-see affairs against El Paso Locomotive FC on August 28 and Pittsburgh Riverhounds SC on Sept. 4 that could prove pivotal to its season.

“It’s another quick turnaround, we leave for the Red Bulls and it’s going to be another tough test,” said Maloney. “We will get back at it on Tuesday. We respect every team we play, and we will be ready for them.” 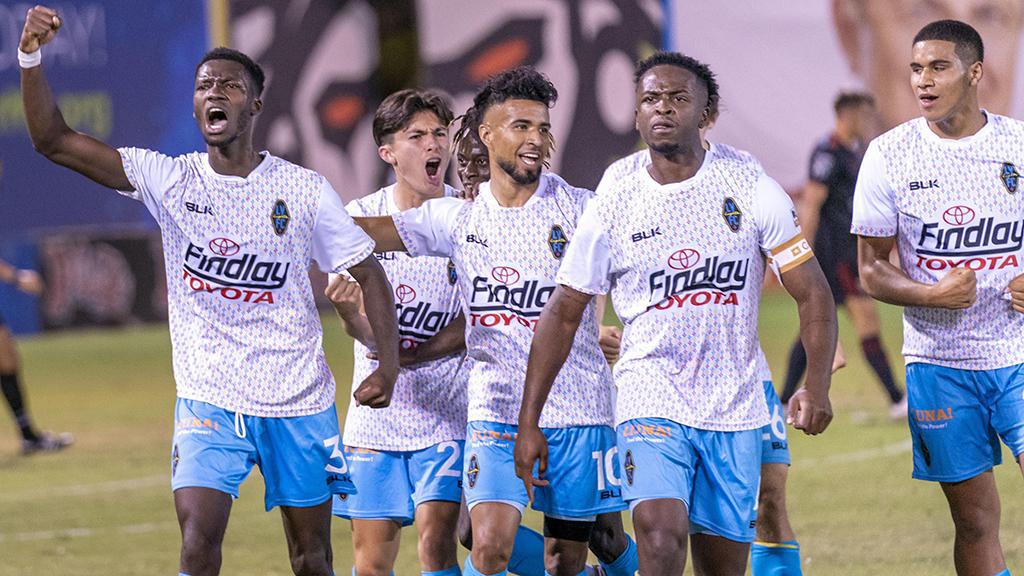 There was no question Las Vegas Lights FC had come a long way since the drubbing it experienced from Phoenix Rising FC in its third game of the regular season, but Saturday night’s 2-2 draw that saw Lights FC rally late after matching their visitors at Cashman Field almost blow-for-blow in attack – Las Vegas outshot Phoenix 19-14 and was close in Expected Goals, finishing with 2.31xG to Rising FC’s 2.82xG – showed more than just progression, but potentially a side that could be a playoff team.

Lights FC was led on Saturday by Roberto Molina, whose goal and assist highlighted a dazzling display on the ball that resulted in his opening goal and complete 5 of 6 dribbles overall. He was backed by some other impressive individual displays, but what shone through most was Las Vegas’ belief that they could play with the favorite to claim the USL Championship Final in most books right now.

That belief led to a late equalizer from Mohamed Traore to give Lights FC four points from its past two games against the top two teams in the Pacific Division. If that can translate to the games against the teams around it in the race for the playoffs – such as Saturday’s trip to Sacramento Republic FC, it could make for a very interesting second half of the season for the side and Head Coach Steve Cherundolo.

The team currently sitting in the catbird seat for fourth place in Tacoma Defiance, which on Sunday rode some good fortune but more positive play to build a three-goal halftime lead against Oakland Roots SC before earning a 3-1 win at Cheney Stadium to cap a four-game homestand that saw the side pick up eight points and remain undefeated this season on its home turf.

“Undefeated sounds nice, but the perspective is we have to look forward and not back, and we are saying that internally and not just how it relates to time but the standings as well,” said Tacoma Head Coach Wade Webber after the game. “We are in a pack that are hunting for stuff, and we know that Oakland is one of those behind so when we, we want to string together good performances, and I thought the first half was a good enough performance to warrant three points. Undefeated homestand, four games, that’s not easy to do, I don’t care the level. We are excited about what’s in front of us.”

The trick now for the Defiance is going to be translating that play to the road, where the side is currently winless this season ahead of Saturday’s trip to face San Diego Loyal SC at Torero Stadium. Tacoma has claimed victory in each of its prior two meetings with SD Loyal this season – including a 2-1 win on July 29 that kicked off this homestand – but that’s not going to mean much if the side can’t find similar performances to the ones it’s been producing recently.

“I’ve made no secret of the fact that we have not been good enough on the road, and this year, last year, previous years, we are still looking for answers just like everybody else who has sat in my seat has looked for answers,” said Webber. “The challenge is in front of us. San Diego is three points ahead and we play them on Saturday, we don’t want to go down there afraid, we want to try to go down there and win the game. But we also have to be humble, [because] we haven’t done anything.”

If there’s someone worth emulating for the Defiance next weekend, it would be Real Monarchs SLC goalkeeper Jeff Dewsnup, who on Saturday night became the youngest goalkeeper to record a shutout in the USL Championship’s history aged 17 years, 2 months, 18 days as the Monarchs earned a 1-0 victory against San Diego Loyal SC for just SD Loyal’s second home defeat of the season.

Dewsnupp recorded a pair of saves in the performance and also had his woodwork to thank as SD Loyal’s Jack Blake rang the crossbar with a shot late in the first half, but the youngster came through with a solid all-around display for his first shutout in the professional ranks.

A Homegrown signing by Real Salt Lake, Dewsnupp has had some bright moments this season, including being nominated for July’s Championship Save of the Month award for an excellent double-stop against Austin Bold FC. While there have been some growing pains as with most young goalkeepers at this level, Dewsnupp has reached this particular landmark faster than his predecessor in the Monarchs net, David Ochoa. If he turns into another prospect at that level, RSL is going to be very happy further down the line.