Battery glad to have fans back for key game with Hounds; Belief still present for Tulsa despite downturn 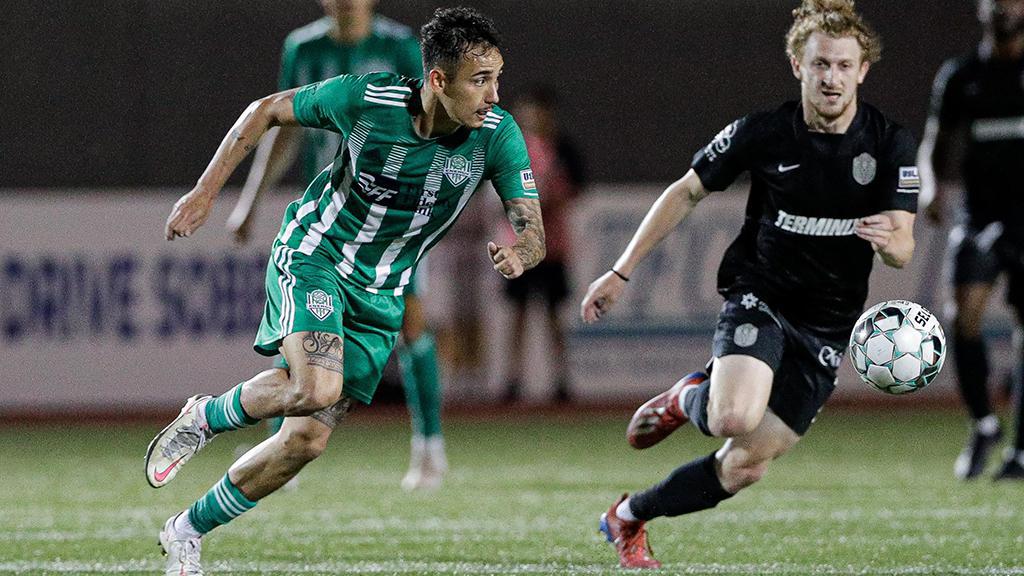 OKC Energy FC has scored only three times in the first half of games this season, something it is looking to improve as it hosts Memphis 901 FC in a crucial Central Division game on Saturday night. | Photo courtesy Steven Christy / OKC Energy FC

Another key weekend of action in the USL Championship’s Eastern Conference kicks off on Friday night with some notable games in both the Atlantic and Central Divisions across the next three days. Here are five things to watch for as the games unfold.

With a point now separating five teams between third and seventh place around the playoff line in the Championship’s Central Division, the spotlight this weekend falls firmly on the clash between OKC Energy FC and Memphis 901 FC at Taft Stadium that sees Memphis carry a five-game undefeated streak into the contest. That is the longest in the club’s short history and has come in part because of the side’s ability to strike first. 901 FC has opened the scoring in four of its past five games, winning three of them and narrowly missing out on a fourth as it conceded in stoppage time against Atlanta United 2 on July 3.

That could prove important against a team like Energy FC, which hasn’t been one of the Championship’s fast starters this season. In fact, OKC is tied for the fewest goals in the opening halves of games this season with only three goals compared to 11 in the second half, something interim Head Coach Leigh Veidman is hoping to see improvement in as his side opens its second half of the campaign.

“It’s a mentality thing more than anything,” said Veidman. “It’s something we have to chip away and get better at. We’d prefer to start from the first whistle because we can’t keep finding ourselves in these situations, especially against the top teams. But the positives are that we showed some fight in the second half and we made some adjustments that worked well. Sometimes, it takes a little spark, and I’m proud of the improved performances once we do find ourselves behind.”

They key for Memphis, of course, is going to be finding a way through Energy FC’s defense, something it has yet to do in two prior meetings this season after a scoreless draw when they last visited Taft Stadium on May 29 and a 1-0 defeat when Energy FC visited AutoZone Park on June 19. With Memphis having only dropped four points from winning positions this season and OKC having only gained four points when trailing, the opening goal could prove crucial in this contest with broad playoff implications.

The Charleston Battery are undefeated in their past six games at Patriots Point as they host Pittsburgh Riverhounds SC on Friday night, and for the squad the presence of fans at the venue has made a notable difference in their ability to push back into the playoff race in the Atlantic Division, with the side having gone on a three-game winning streak prior to its setback last Sunday night on the road against Miami FC.

The lack of fans when protocols were put in place for the Battery’s first meeting with Pittsburgh this season on July 7, when the Hounds scored a late equalizer through Tommy Williamson to emerge with a 1-1 draw against one of their longtime rivals. For Battery defender Logan Gdula, the atmosphere provided by the impressive support the side has received this season could have made a difference then and may on Friday as Charleston looks to derail one of the hottest teams in the Championship right now.

“The flow of the game changes when the crowd is in it, it gives you momentum, especially when your legs are feeling heavy and you’re tired, it gives you something to fight for,” said Gdula this week. “It helps a lot, when there’s no fans, the atmosphere is just not the same.” 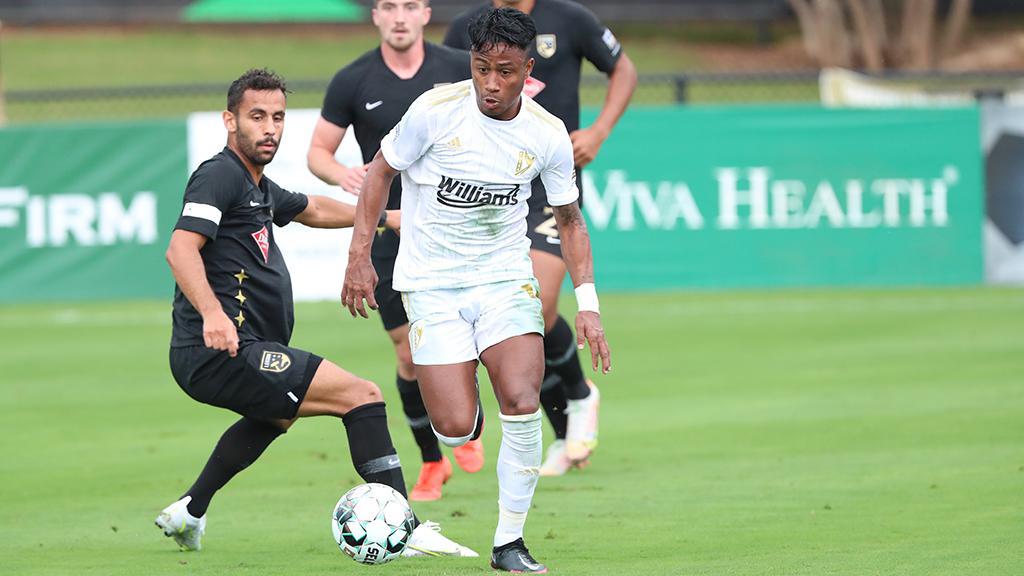 If you want a visual of the way FC Tulsa’s season has gone so far, you could probably look at one of those giant Pirate Ships at the fairgrounds that swing back and forth as if on a giant pendulum. After picking up three consecutive wins, then three consecutive losses, followed by a run of three wins out of five and now a four-game losing streak after Wednesday’s 2-0 defeat to Indy Eleven, it’s been a series of major swings back and forth in terms of the team’s form.

Within the locker room after Wednesday night’s loss to Indy – which saw Tulsa hit the woodwork twice and outshoot their visitors 19-10 before being sunk by a pair of late goals – the belief is the team is close to finding the form it needs to gain consistent positive momentum after being dragged back into the Central Division’s playoff race.

“I feel like we’re right there,” said Tulsa captain Bradley Bourgeios on Wednesday night. “We’re kind of on this teeter totter of playing well, doing the right things but it’s not falling our way right now. I’ll tell you what, we have the talent. We know that we can get things done. Through adversity we’re going to have to find a way to dig ourselves out of it.”

That will be tested on Saturday night as Tulsa hosts Birmingham Legion FC, which is currently 10 points ahead in second place in the Central Division standings at ONEOK Field. If Tulsa can find all three points, though, it could be the trigger the side is looking for in its pursuit of a second consecutive postseason berth.

One of the hallmarks of the Tampa Bay Rowdies’ rise to the top of the Eastern Conference over the past two seasons under Head Coach Neill Collins was the major improvement of the club’s road form, which saw the Rowdies post winning records on the road in both 2019 (8-5-4) and 2020 (5-2-1) and not drop a point in a game it led in either campaign. The Rowdies go into Friday’s game with the New York Red Bulls II at 2-4-0 on the road this season, although Collins believes the question has been a lack of execution rather than any significant issue tied to being away from Al Lang Stadium.

“I don’t see so much the problem as us being on the road, the problem right now is we’ve just not performed,” said Collins this week. “On the road you just have to have this stoic, resolute mentality that we’ve probably missed just slightly because maybe we’ve just been used to being dominant. Playing all those home games, (to start the season) you’re used to dominating and playing your way. It takes away some being on the road, knowing that you have to adapt, and you have to be flexible and hang in there sometimes. That’s something we need to get back to and we will.”

Maybe the most notable factor in the Rowdies’ away record has been the lack of finishing, where the side has yet to record more than one goal in any of its six away games this season, tallying only four times overall. That proved enough when Tampa Bay visited the Red Bulls II on June 2 as Jordan Adebayo-Smith scored the only goal of the game, but the side will likely look to be aggressive early in what could be an action-packed game at MSU Soccer Park.

If you’re looking for a game that feels set to be full of action this Saturday night, you could do a lot worse than tuning into the interconference meeting between the Mountain Division’s Colorado Springs Switchbacks FC and the Atlantic Division’s Hartford Athletic, which features two of the top four goalscoring sides in the Championship this season as they square off at Colorado Springs’ new downtown home of Weidner Field.

After earning a 1-1 draw with Miami FC on Wednesday night to maintain their record of not suffering back-to-back defeats this season, the Athletic certainly seem willing to make a game of it

“You know, we're not going to be setting up away from home to not lose, we're going to go for it,” said Hartford Head Coach Harry Watling after Wednesday’s game. “I think that's why people like watching us because there's always drama, there's always something going on. So, we want to be everyone's favorite second team if we're not their favorite first team, and I think that the personality of the guys, then it lends itself to being that.”

Given the attacking firepower now at the disposal of both sides with both Juan Carlos Obregon Jr. and Walmer Martinez’s return from international duty for Hartford and the dynamic attack led by Golden Boot leader Hadji Barry on the Switchbacks side, there could be on-field fireworks in this one.