After breakout 2020 season, San Antonio’s Jose Gallegos is picking up the pace this campaign 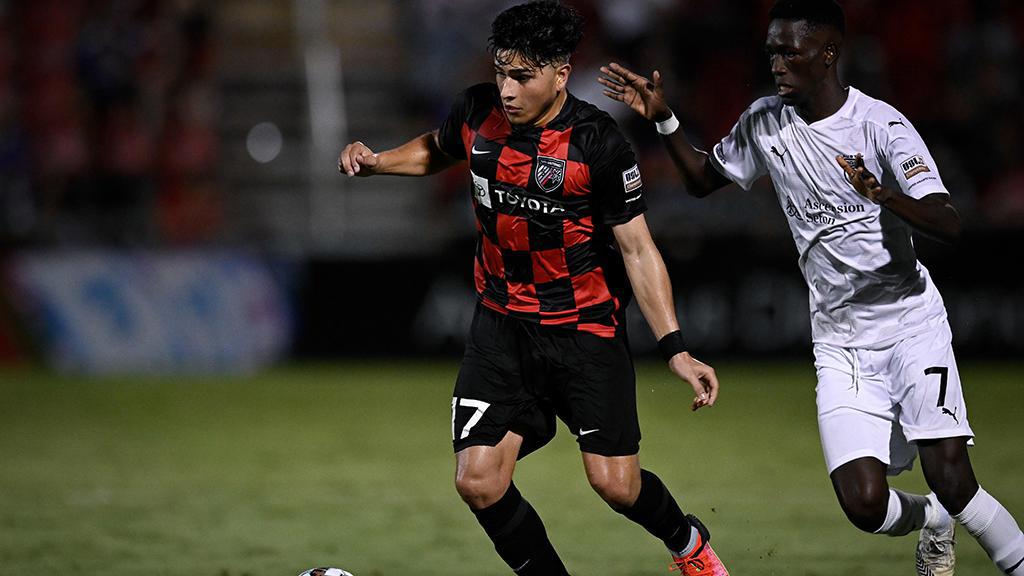 Welcome back to our monthly spotlight featuring some of the top performers in the USL Championship aged 20 years old and younger from past month. To start, we caught up with one of the league’s best-known young talents, who throughout recent weeks has started to find this rhythm in the final third.

There was a sense of anticipation last spring as San Antonio FC’s Jose Gallegos made his way through preseason with some sparkling performances against opponents from Major League Soccer and the USL Championship. Those hopes were realized in the SAFC Pro Academy graduate’s first full professional season, where he was nominated for the league’s Young Player of the Year award before undertaking an offseason training stint with legendary German club Bayern Munich.

The weeks spent in Europe prior to the 2021 campaign could have felt like a glimpse into the future for the 19-year-old, and they certainly provided some added motivation for this new season.

As with most young players, the pathway isn’t always a direct upward line, and Gallegos is still working on bringing more consistency to his game. The past weeks, though, appeared to find a breakthrough as he notched his first two goals and two assists of the season, while also notching seven key passes and three Big Chances Created according to Opta in the month of July. What might be the hallmark of Gallegos’ game, though, is his willingness and ability to take opponents on with the ball at his feet.

The inspiration for that comes from the modern-day source for soccer dreams: YouTube. Watching videos of legendary dribblers like Ronaldinho and Lionel Messi has given Gallegos a window into elements of the game he wants to add to his talents.

“Seeing how they would get past players and what they would think of in certain situations, and me, I just try to put that in my game and do it my own way,” said Gallegos. “I’ve never changed that, been doing it since Day 1, and it’s something I think I’m never going change.

“I think [Ronaldinho]’s an inspiration for not just me but for players. Like Messi as well, how he plays so consistently as well in his game is still something I’m trying to put in my game.”

Gallegos isn’t the only notable young playmaker in the Championship – or even the Mountain Division – currently turning heads. Across in El Paso, 17-year-old Diego Luna has also been making notable contributions for Locomotive FC. The two are set to potentially share the same field again on Wednesday night at Southwest University Park (9 p.m. ET | ESPN+) after Luna and El Paso got the upper hand at Toyota Field last week, with Luna notching the game-winning goal for the visitors.

The presence of Luna, and other new young signings like Phoenix Rising FC’s 16-year-old Niall Dunn, and USL Academy graduates like Louisville City FC’s Elijah and Josh Wynder, say nothing of the cohort joining him in San Antonio like Leo Torres and others is a major plus for the Championship in Gallegos’ eyes, with more talented young players getting the chance to chase their dreams in the professional game like those that played in the league not so long ago.

“I think it’s a cool thing overall having players like Tyler Adams and these guys who have made it to the very top,” said Gallegos. “It’s motivating for me, for Diego, for all these guys coming up and really proving themselves in the league. It just shows how the USL is evolving, and that it’s not just MLS that’s bringing in these young talents, the USL is really making a move for that, and I think it’s just going up from here.”

Wherever Gallegos’ path takes him, though, the method and work won’t change. As he learned from his father Jose Gallegos Sr., living in the present and making the best of everything that comes your way is what holds the key to a very bright future.

“That’s what my dad [Jose Sr.] would tell me all the time, it’s taking it day-by-day, improving day-by-day,” said Gallegos. “If you train badly one day, think of the next day and how you can improve, what can you do better, and it’s not looking too far ahead because if you’re doing that, you’re not focusing on what you’re doing in the now. That’s what my mindset has always been since the beginning, and my father has done well in putting that in my head.”

Gallegos’ upward climb will hopefully continue for the rest of this season in a competitive Mountain Division, but there have been some other notable standouts over the past month as well.

Jonathan Gomez, Louisville City FC – The 17-year-old standout continued a remarkable campaign for LouCity, tying for the most assists in the Championship in July with four alongside teammate Brian Ownby while also notching 12 key passes and winning 33 of 57 duels – a 57.9 percent success rate.

Tony Leone, Las Vegas Lights FC – Playing center back at 17 years old in the Championship can be a hard task, but Leone is taking to the job and helping Lights FC’s improvement in recent weeks. This past month saw him notch his first professional goal, while also winning 40 of 59 duels and posting an 81.5 percent passing accuracy rate on 334 total passes.

Kobi Henry, Orange County SC – The former U.S. U-17 international stepped into Orange County’s back line over the past month, more than doubling his minutes for the season in July. In that span, Henry notched not only his first professional goal against Oakland last Saturday but also made 20 clearances and won 7 of 10 tackles.

Nicque Daley, Charleston Battery – This season is 20-year-old Jamaican’s third with the Charleston Battery, and after being brought along well in his first two years, Daley is starting to flourish. His three goals and two assists between July 1 and August 1 moved him within one goal of tying his total of six from a season ago, and his speed and skillfulness on the ball is proving a handful for opponents.

Diego Luna, El Paso Locomotive FC – Another solid month in the books for the 17-year-old Luna, who bagged another two goals and an assist to double his numbers in both categories while recording nine key passes as Locomotive FC went undefeated through July. As with all these players, if you haven’t seen Luna play yet, make sure you do, soon.