TAMPA, Fla. – The USL Championship announced the Team of the Week Presented by Cleer Audio for Week 15 of the 2021 regular season on Tuesday, with El Paso Locomotive FC forward Luis Solignac voted Player of the Week after recording three goals across two contests that helped lead Locomotive FC to a pair of victories in the week’s action.

The Argentine veteran joined Locomotive FC this past offseason after leading San Antonio FC in scoring in 2020, and Solignac came back to haunt his former club last Wednesday night as he scored the opening goal in a 2-1 victory for El Paso at Toyota Field. Solignac then moved to six goals this season with a two-goal performance against Real Monarchs SLC on Saturday night as Locomotive FC took its fifth win in the past six games to move six points clear at the top of the Mountain Division standings and extend its home undefeated streak to 14 regular-season games.

Solignac earned 50 percent of the ballot to claim the honor. Pittsburgh Riverhounds SC’s Alex Dixon finished second on 25 percent as he scored twice including the game-winner with seven minutes to go in the Hounds’ 3-1 comeback victory against Hartford Athletic on Saturday night, while Sacramento Republic FC’s Luis Felipe Fernandes finished third on 20 percent as he scored his first two goals of the season to lead Republic FC to a 3-1 win against the New York Red Bulls II. 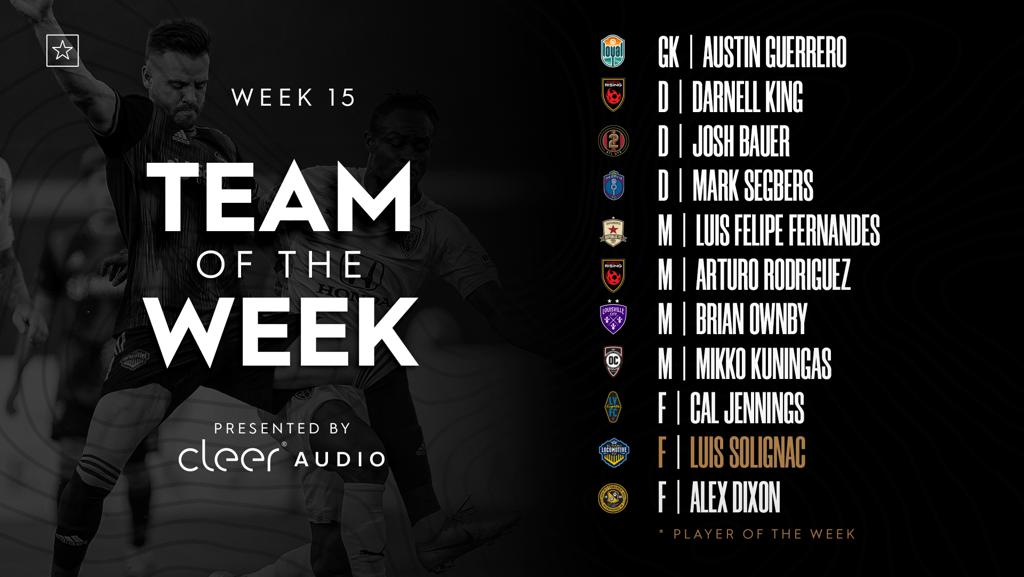 D – Josh Bauer, Atlanta United 2: Josh Bauer put in a big defensive performance to help his side earn a 2-2 draw on the road against Birmingham Legion FC, winning 10 of 14 duels while making five interceptions and 12 recoveries.

M – Brian Ownby, Louisville City FC: Brian Ownby recorded the assists on both goals for Louisville in its 2-1 victory against Sporting Kansas City II on Wednesday night and had four shots and six key passes while completing 28 of 33 passes overall.

M – Mikko Kuningas, Orange County SC: Mikko Kuningas recorded a pair of assists and had six key passes overall to lead Orange County to a 3-0 victory against Oakland Roots SC on Saturday night, and also made six recoveries and completed 20 of 27 passes.

F – Cal Jennings, Las Vegas Lights FC: Cal Jennings scored a pair of goals to lead Las Vegas to a 3-1 victory against Orange County SC on Tuesday night, while finishing the night with five shots overall and completing 11 of 16 passes.

F – Alex Dixon, Pittsburgh Riverhounds SC: Alex Dixon scored twice on his only two shots of the game to lead the Hounds to a 3-1 victory against Hartford Athletic and also recorded two key passes and six recoveries.