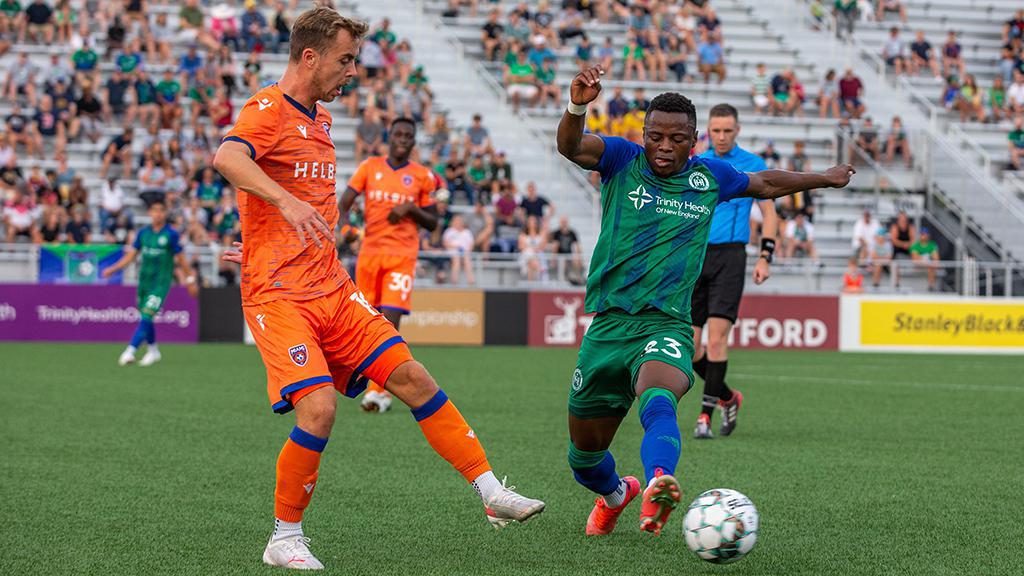 Hartford Athletic took victory when it hosted Miami FC last month and can pull level on points with the South Florida side in the Atlantic Division with a repeat performance on Wednesday night. | Photo courtesy Hartford Athletic

HARTFORD, Conn. – Hartford Athletic will try to rebound as it plays host to Miami FC on Wednesday night at Dillon Stadium with the chance to pull back level on points with the visitors in a top-four Atlantic Division clash that sees the teams meet for the third time this season. Kickoff is scheduled for 7 p.m. ET.

@HFDAthletic (7-4-2, 23pts) returns home after falling late against Atlantic Division leaders Pittsburgh Riverhounds SC at Highmark Stadium on Saturday night. Derek Dodson gave Hartford a halftime lead with a well-taken finish midway through the first half, but the Hounds rallied after scoring soon after the halftime break and struck twice in the final 10 minutes to pull out the victory. The defeat saw Hartford alternate wins and losses in each of its past four games, but one of those victories came against Miami FC when the teams last met on July 24 at Dillon Stadium when goals by Alex Lara and Conor McGlynn – both assisted by Danny Barrera – saw the hosts take their second win of the season against the South Florida side. The Athletic have yet to lose consecutive games this season and have lost only once at Dillon Stadium in 2021.

@TheMiamiFC (8-6-2, 26pts) reached the midway point of its campaign on Sunday night with a thrilling 3-2 victory against the Charleston Battery that saw the side rally for victory for the first time in the 2021 season. After conceding twice in the opening half, Ariel Martinez pulled a goal back in the final minute before halftime to begin the comeback. That was followed by goals from Haitian international Christiano Francois and a 78th-minute winner by Billy Forbes off a free kick from 25 yards that picked out the top-right corner of the net. Miami will be without Robert Kcira on Wednesday night after he was sent off against the Battery, and the side will be hoping to improve on its road form this season that has seen it go only 2-3-2 away from home, with the wins coming against seventh-placed New York Red Bulls II and eighth-placed Loudoun United FC.