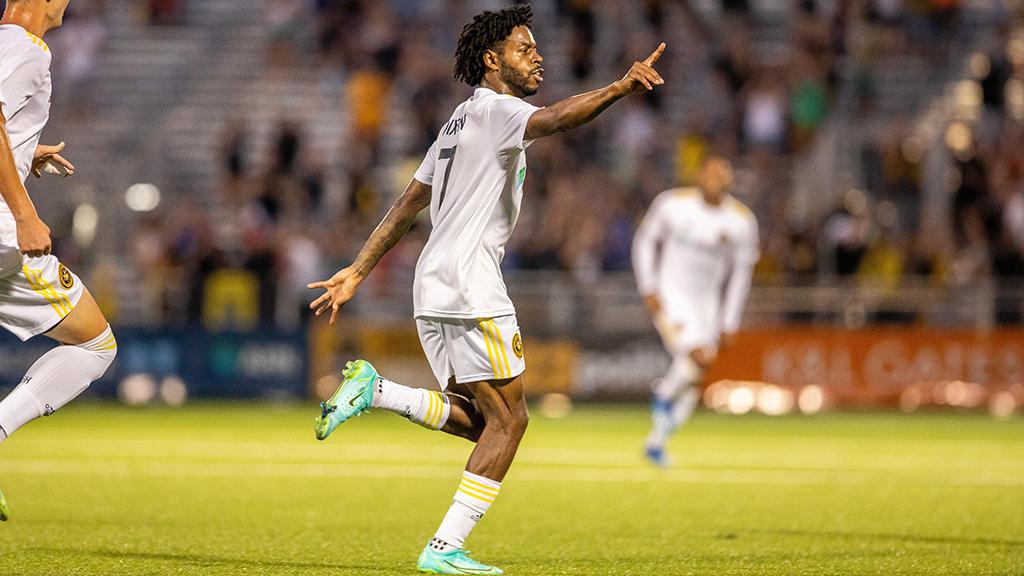 We anticipated a big weekend of action in the USL Championship’s Atlantic Division, and we got just that with some outstanding goals and performances over the past two days. Here are five takeaways from the Eastern Conference after the end of Week 15.

With the way the Atlantic Division had taken shape nearing the midway point of the season, Saturday night’s contest between Pittsburgh Riverhounds SC and Hartford Athletic certainly felt like a high-stakes matchup. Fueled by the energy of a boisterous crowd of almost 4,000 fans, Pittsburgh came through with a second-half performance that highlighted a side that is starting to sharpen in the attacking third to take a 3-1 victory that propelled the side to the top of the division standings.

“I think if we were sharper in the first half, we could have gotten some clearer looks,” said Hounds Head Coach Bob Lilley. “We just didn’t find the breakthrough; their keeper made a few big saves. We stuck with it, got Alex Dixon a little bit higher. Our mindset wasn’t to draw or to get a draw, we knew we wanted two goals. I’m proud of the guys. It wasn’t a straightforward game.”

With three goals in the past two games – both of which have seen Pittsburgh bag three goals overall – Alex Dixon led the way with a key equalizer early in the second half before putting home a fine individual finish to put the hosts ahead for good with seven minutes to go. With the chances the side had created either side of halftime – resulting in a 17-5 advantage in shots, 14 of which came from inside the penalty area – the Hounds ran out winners to complete an undefeated month of July, a run that has the side now firmly in the title conversation.

“It’s a big win for us,” said Dixon. “We put ourselves in a hole in the first half, not finishing our chances. We came back and played well as a team in the second half. It’s a great result for us.”

One of the main challenges taking on a side like the Charleston Battery is if you let them get ahead, the speed and skill the side boasts on the counterattack can be lethal. That was the spot Miami FC found itself in on Sunday night at FIU Stadium after conceding early on a goal by Nicque Daley, which was followed up by a textbook counterattack sprung by the Jamaican to set up Zeiko Lewis for Charleston’s second just past the half-hour mark.

But Miami showed just how good it could be this season to not only come back and take something from the game but earn a 3-2 victory on Billy Forbes’ late winner from a free kick after the hosts had been reduced to 10 men with Robert Kcira’s sent off with 20 minutes to go. Miami did so not only by controlling possession, but by reducing the number of opportunities the Battery were able to create when they looked to break. Charleston recorded only one shot in the opening 40 minutes of the second half before a late flurry as Miami looked to defend its lead.

The result marked the first time this season Miami had come back to win after trailing in a contest, having previously earned draws on the road against Pittsburgh Riverhounds SC and the New York Red Bulls II, and served as a great bounce-back performance after last week’s defeat in Hartford. 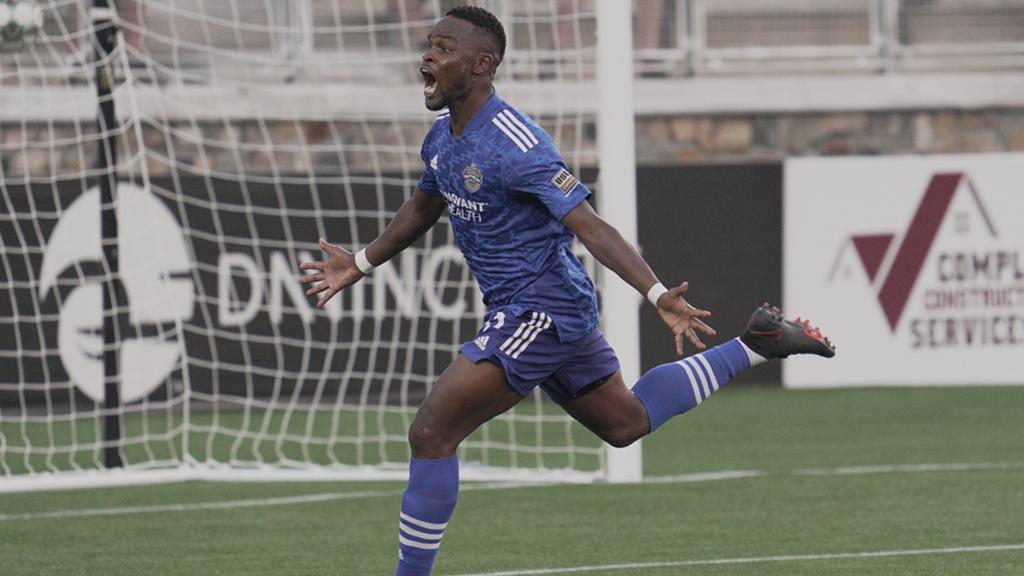 It was too early in the season to call the Charlotte Independence’s contest with the Tampa Bay Rowdies on Saturday night a must-win, but gaining the club’s first three points at its new home of American Legion Memorial Stadium and snapping a five-game winless streak in the process should have reduced the pressure the side might have been feeling to not lose touch with the teams in the playoff positions in the Atlantic Division after Dane Kelly and Irvin Parra each scored in a 2-0 win.

Kelly’s return to the lineup after injury was among the keys for the hosts, as his goal two minutes into the second half gave the Independence a lead to defend. That hadn’t been a strong suit for the side in its prior two games at Memorial Stadium, both of which saw the side hold a first-half lead that evaporated against the New York Red Bulls II and Phoenix Rising FC, but this time the hosts were solid at the back, allowing only one shot on goal to the Rowdies in their 13 overall attempts to secure Brandon Miller’s fifth shutout of the season.

“We actually felt as the first half wore on, that we started to push in their end and get decent half chances,” said Independence Head Coach Mike Jeffries. “I felt like we could continue that. During halftime we talked about changing shape and how we wanted to deal with Tampa [Bay] and what they had to offer. It was great that we got off on a good foot. I think almost for the first minute we sort of had half chances and we were able to get at them and obviously the goal came pretty early so that was a huge confidence boost for us.”

It’s always one thing to have games in hand on the teams around you, but you’ve still got to make sure you maximize their potential when it comes to taking advantage. During July, Memphis 901 FC did just that, posting only its second undefeated month in club history, and it got August off to an ideal start with a 2-1 win against Sporting Kansas City II on Sunday evening that saw Kyle Murphy continue to find the net and Michael Salazar bag the winner early in the second half.

Memphis is now in fourth place in the Central Division standings after OKC Energy FC’s loss to Louisville City FC on Saturday night and has three games in hand on both Energy FC and Atlanta United 2, both now a point back in the standings. There’s no time to sit still for 901 FC, which takes on Energy FC this Saturday night at Taft Stadium in a key Week 16 matchup, but the foundation is now in place for Head Coach Ben Pirmann’s side to build further and make the club’s playoff aspirations a reality.

“It was good overall,” said Pirmann on Sunday. “Anytime you go on the road and get three points is great. They [Sporting Kansas City II] dropped eight or nine guys down from the first team. They were a tough opponent, but we did well. It was good to have the two strikers each get a goal, and everybody involved played their hearts out.”

Almost until the end, it looked like the pair of goals notched by Jamaica’s Neco Brett and Junior Flemmings were going to be enough to keep Birmingham Legion FC in range of Louisville City FC at the top of the Central Division standings. Then with one final chance in the sixth minute of stoppage time, Atlanta United 2’s Darwin Matheus changed that equation as he scored the equalizer in a 2-2 draw that had no lack of drama at BBVA Field.

“Once we got the lead, I think we took our foot off of the gas and played different, and that’s something we have to change because it happened a little bit in Indy as well,” said Legion FC Head Coach Tom Soehn. “We have to learn how to not change when we get up. So, it’s disappointing because it feels like a loss, but our guys had to come back, and you still have to credit them for coming back … but we also gotta learn to finish those games off.”

Against Indy Eleven the week prior, Legion FC had bailed itself after conceding late at Michael A. Carroll Stadium thanks to Jonathan Dean’s stoppage-time winner. With the lateness of Matheus’ goal for Atlanta, there was no such opportunity this time, and that means there’s now a seven-point gap between Louisville and Birmingham in the Central Division. While Legion FC has two games in hand on the leaders, that’s now not enough to surpass them with maximum points, making this result a notable one for later in the season.