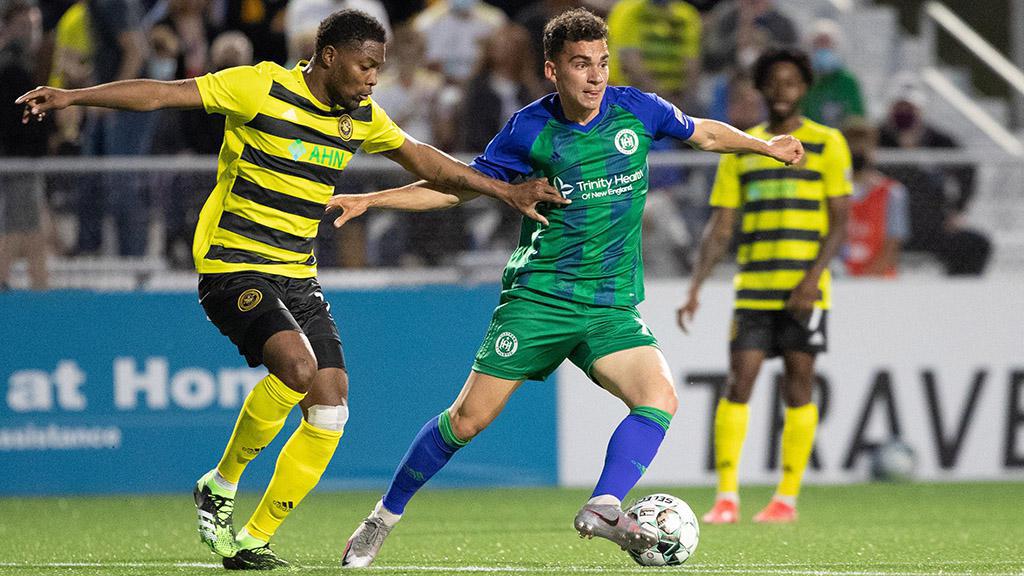 PITTSBURGH – Second-placed Pittsburgh Riverhounds SC and third-placed Hartford Athletic will square off at Highmark Stadium on Saturday night in a key game in the Atlantic Division with both teams coming off impressive victories last time out. Kickoff is scheduled for 7 p.m. ET.

@RiverhoundsSC (8-4-3, 27pts) remained in contention for first place in the Atlantic last Friday night as it took a 3-1 victory on the road against the New York Red Bulls II that saw Alex Dixon notch a goal and assist and Kenardo Forbes notch the seventh two-assist game of his career at MSU Soccer Park. The win kept the Hounds level with the Tampa Bay Rowdies to start Week 15 as the side earned its third win in the past four outings. Forbes has now recorded 43 regular-season assists in the Championship as the league’s all-time leader, while Russell Cicerone has notched seven goals this season to sit tied for sixth in the league after bagging another goal against New York. The hosts will be looking to turn in a more consistent performance than its prior meeting this season with Hartford that saw the Hound concede a late equalizer at Dillon Stadium, but Pittsburgh has won three in a row on home turf and back-to-back shutouts in its past two home games.

@HFDAthletic (7-3-2, 23pts) bounced back from only its third loss of the season in its most recent outing as it defeated Miami FC 2-0 to move into third place in the Atlantic, four points back of the Hounds with three games in hand. Playmaker Danny Barrera also had a two-assist game as he continued his pursuit of Forbes for the most assists in Championship’s history, now sitting on 39 helpers in his career in the league. The Athletic will be hoping to emulate their last trip to Highmark Stadium on September 26, 2020 when it took a 1-0 win on a goal by Ever Guzman in a result that proved key to Hartford finishing ahead of the Hounds in Group F in the Championship last season. Guzman has now gone, but the side could be with both Walmer Martinez and Juan Carlos Obegon Jr. on Saturday as both forwards return from international duty at the 2021 Concacaf Gold Cup and Men’s Olympic Soccer tournament respectively.