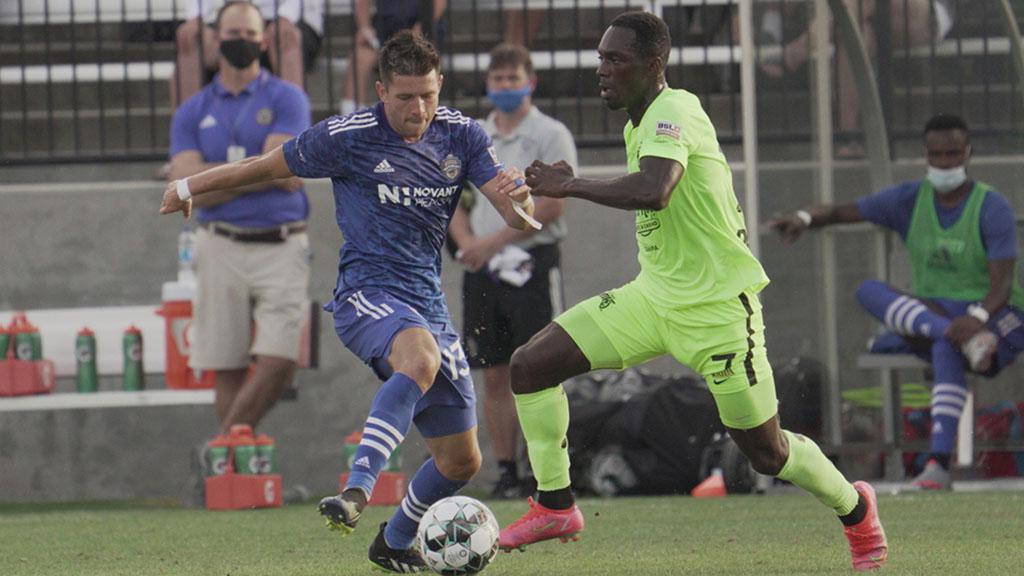 The Atlantic Division in the Championship’s Eastern Conference features three key games between the top six sides that will help shape the approaching second half of the season this weekend, while there’s also intrigue in the Central Division as well. Here are five talking points going into Saturday and Sunday’s action.

When the Charlotte Independence last squared off against the Tampa Bay Rowdies on June 5, the side’s 1-0 victory in its home opener placed it firmly in the playoff positions in the Atlantic Division’s early going. As the Rowdies head for their second visit to Charlotte this season, though, the Independence are now on the outside looking in as surges in recent form by Miami FC and the Charleston Battery coinciding with a run of four defeats in five games for Charlotte have dropped Head Coach Mike Jeffries’ side to sixth place in the standings, seven points out of the playoff places.

That makes Saturday’s game with Tampa Bay at American Legion Memorial Stadium a key moment for the Independence as it looks to snap that streak – which continued last Friday night in a 2-0 defeat to the Battery that saw Sylvain Marveaux denied from the penalty spot – and find a way back into the playoff picture.

The Rowdies won’t be sympathetic to the Independence’s plight as they face a battle of their own at the top of the standings with Pittsburgh Riverhounds SC and will be looking to make a similar start to the game as it did at home to Loudoun United FC last Saturday, where an overwhelming series of early attacks led to an early goal in either half on the way to a 3-1 victory. With Rowdies forward Sebastian Guenzatti’s industry in attack, it could make for a very interesting debut should new Independence arrival Christian Fuchs make his first appearance while looking to stabilize the club’s back line.

HARTFORD’S CALDWELL SHINING AS SIDE HEADS TO PITTSBURGH

Hartford Athletic showed off its mettle in taking victory against Miami FC last Saturday night, but it was also another example of how impressive goalkeeper Jeff Caldwell has been this season to help the side stay firmly in the postseason positions in the Atlantic Division. Posting a five-save shutout for his fifth clean sheet of the season, Caldwell is tied for second in the Championship while also sitting fourth in saves with 45 so far in 12 appearances.

Caldwell hasn’t just made a high volume of saves this season, either. He currently rates as the second-best goalkeeper in the Championship in Goals – Expected Goals Differential at -6.02xGA, meaning his performances have helped the Athletic overcome one of the highest Expected Goals Against marks in the league so far this season defensively. That will be tested this Saturday night as the side faces Pittsburgh Riverhounds SC at Highmark Stadium, but the contest also offers a major chance for the Athletic to close the gap to the top two in the division if it can come away with a result, with the side still sitting with games in hand on both the Hounds and Tampa Bay Rowdies.

“I would just reinforce what [Athletic Head Coach] Harry Watling said once,” said assistant coach Luiz Silva last weekend. “I believe he's the best goalkeeper in the league, and we're really proud to have him, not for just the saves as you guys see, because that's hard work from him, … but his leadership. And as we look back, he grew a lot since the beginning. I'm really proud of him.”

CHARLESTON GETS CHANCE TO PASS MIAMI 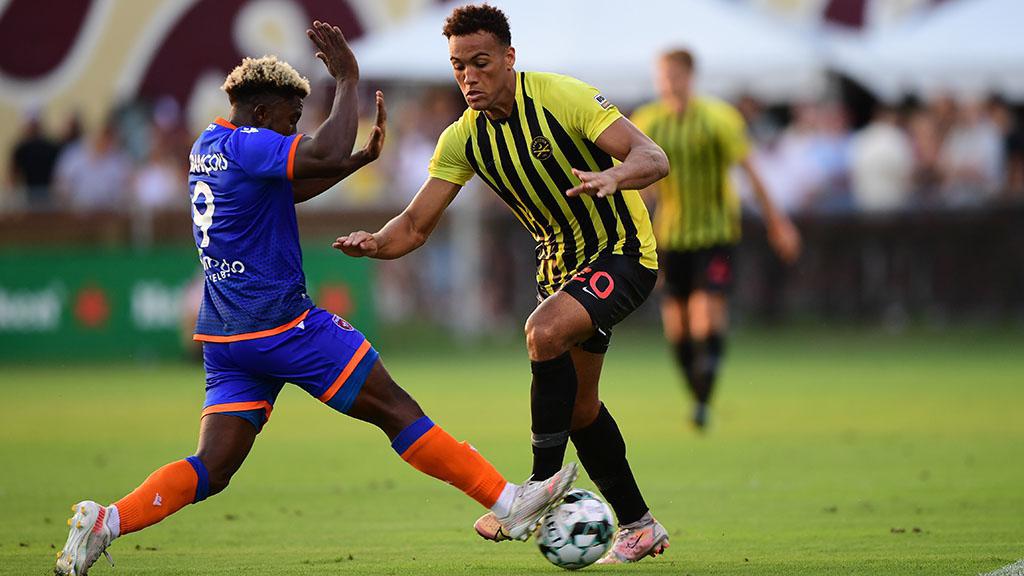 The Charleston Battery's AJ Paterson and his teammates can pass Miami FC on Sunday night in the Atlantic Division standings with a repeat of the 2-1 win the Battery took when the sides first met this season. | Photo courtesy Charleston Battery

It might not have come quite the way the Charleston Battery drew it up after letting a two-goal lead in the first half slip, but Tuesday night’s 5-3 barnburner victory against Loudoun United FC continued the side’s recent positive form and set up a major opportunity on Sunday night as it visits Miami FC at FIU Stadium with a chance to move into the playoff positions for the first time this season.

“We got off to a good start to start the game, and then we were kind of upset with ourselves that we allowed a couple of late goals and allowed them to climb back into the game,” said Battery defender Ben Di Rosa on Tuesday night. “But, we're very proud of our second half performance, getting those three points is huge.”

Charleston has now won three consecutive games after previously earning victories at home against Hartford Athletic and the Charlotte Independence and can match its longest winning streak of the 2020 season should it replicate a 2-1 victory against Miami when the teams first met this season at Patriots Point on June 18.

Since then, the side has added some notable pieces to its attacking group, including Italian forward Claudio Repetto – who is now tied for the team-lead with four goals after scoring twice against Loudoun, including a remarkable highlight-reel finish – and Panamanian attacking midfielder Romario Piggott. After sitting some notable names until the second half against Loudoun, Zeiko Lewis and AJ Paterson among them, the Battery should be in good shape to visit a dangerous Miami side.

There’s been no questioning OKC Energy FC’s turnaround in form over the past seven games, during which it has claimed 14 points to move into the playoff places in the Central Division. The lone blemish on that record, however, came in a 3-1 defeat to Louisville City FC on July 14 that saw the hosts control the game for the most-part at Lynn Family Stadium. As Energy FC returns to Louisville on Saturday, the big question they have to answer will be what lessons they learned from that game that can be applied to this rematch.

The biggest adjustment the side has made since then has been its shift to a three-player defensive back line, which has created a new defensive stance that continued to take shape last Saturday night in a 0-0 draw against Sporting Kansas City II. Holding one of the most potent attacks in the Championship at bay – Louisville ranks second in the league with 31 goals after its 2-1 victory against SKC II on Wednesday night – is going to be a key for the visitors, but interim Head Coach Leigh Veidman is looking for his side to pick its spots to be aggressive in the attacking half.

“Defensively, we’ve come off the back of two decent performances which is adding fuel to our fire.” Said Veidman. “Offensively, we’ve got a chip on our shoulder. We’re going in there to get three points and play to the best of our ability on all sides of the ball.”

When Memphis 901 FC and Sporting Kansas City II last met, an impressive second half comeback by the hosts at AutoZone Park that saw Kyle Murphy and Kadeem Dacres find the net proved to be for naught as Danny Barbir scored the winner for Sporting in a 3-2 victory for the visitors. Since that game, though, Memphis is undefeated and carries a four-game streak into Sunday’s rematch at Children’s Mercy Park firmly in contention for a playoff berth.

In that span the side has claimed victories against both Birmingham Legion FC – its first win at BBVA Field since the sides joined the Championship in 2019 – and last weekend against FC Tulsa. The key question coming out of that game will be the availability of Kyle Murphy, who scored the only goal late in the first half but was then substituted at halftime after sustaining a cut head during the opening period. Murphy’s six goals lead the team and have him tied for 11th in the Championship overall, and his absence would leave a notable gap for his teammates to fill.

With games in hand on the teams sitting directly above them in the standings, though, a Memphis victory on Sunday evening would go a long way to setting up a potential postseason drive in the second half of the season.